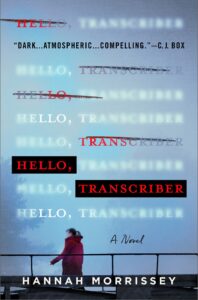 Hannah Morrissey’s Hello, Transcriber is a captivating mystery suspense debut featuring a female police transcriber who goes beyond the limits to solve a harrowing case.

Every night, while the street lamps shed the only light on Wisconsin’s most crime-ridden city, police transcriber Hazel Greenlee listens as detectives divulge Black Harbor’s gruesome secrets. An aspiring novelist, Hazel believes that writing a book could be her only ticket out of this frozen hellscape, but her life isn’t exactly brimming with inspiration. Until her neighbor confesses to hiding the corpse of an overdose victim.

With an insider’s look at the investigation, Hazel becomes spellbound by the lead detective, Nikolai Kole, and the chilling narrative he shares with her. Through his transcription, she learns that the suspicious death is linked to Candy Man―a drug dealer notorious for selling illegal substances to children―and when Kole invites her on a covert operation to help take the dealer down, the promise of a story calls to her.

As the investigation unfolds, Hazel will discover just how far she will go for her story, even if it means destroying her marriage, her career, and any chance she has of getting out of Black Harbor alive. Because if she’s learned one relentless truth about this place, it’s the fact that everybody lies.

To purchase Hello, Transcriber, click on any of the following links: Amazon, Barnes & Noble & IndieBound

As writers, we’re all familiar with the advice, “Write what you know.” Fiction is taking what you know, and asking it, “What if?”

When I set out to write Hello, Transcriber, what I knew was crime. A lot of it. In a twisted way, it was my livelihood, as it was my job to stay up all night, listening to detectives and typing up every gruesome thing that happened in the city. Some cases were more interesting than others, and there are a few that I can pinpoint having drawn inspiration from, but I think, in the end, everything I heard over those years helped shape the cases, the characters, and the overall world of Black Harbor.

Early one morning while I was transcribing, I looked out the window and noticed someone sitting outside the blue apartments across the street and I just wondered: “What if they came over here?”

Black Harbor is a fictional town in Wisconsin, a state you’ve spent 30+ years in, tell us about the community, did you take details from real places?

Black Harbor is an amalgamation of places I’ve been and my imagination. There’s something about anchoring it in Wisconsin, too, that gives it an authentic sense of place, even though it’s—for the most part—made up.

By setting my characters in a frozen Wisconsin town, suddenly I have a reservoir to draw from, and one that I know quite well. People who aren’t from the Midwest might not have any no idea what forty below feels like or how your windshield will look when you leave your car parked outside for two hours. But I do, and I can describe it in minute detail, down to the snowflake fractals on the glass.

Some of your other hobbies include travel and photography. Do your photos tell a story? Or are you solely interested in imagery? How does photography intersect with your storytelling? 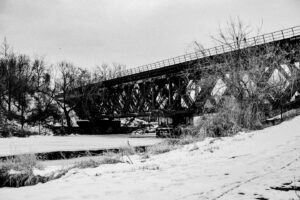 I think the way photography most intersects with my storytelling is the philosophy behind it. For instance, a photographer who wants to hone her craft will bring her camera everywhere because it will put her in that state of mind of looking at the world in compositions.

You have to always be searching for those details that make a place unique, whether it’s black plastic bags that float across the streets, the lake eating the shoreline, or a black trestle bridge people occasionally jump from.

As far as my own photography is concerned, I’m more of a portrait photographer. I like playing with light and exploring shadows, and I love capturing moments for people. However, on my website I share some of my original photography that shows inspiration for Black Harbor.

I love this question, too, because it means I get to talk about Widowmaker, the second thrilling novel in the Black Harbor series. This one features a photographer with a dark past who partners with a detective to solve the city’s most notorious cold case. I wanted to explore Black Harbor through her lens, literally, as someone who, unlike Hazel in Hello, Transcriber, grew up there and got out, and was lured back.

What kind of person could Black Harbor create? I guess you’ll have to read Widowmaker to find out. 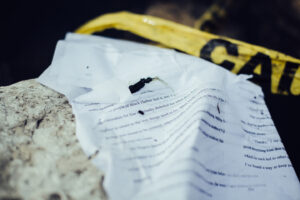 Tell us about your publishing journey: 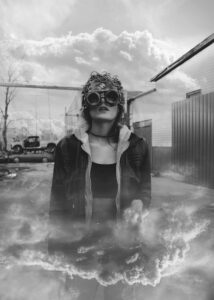 I’m pretty sure publishing is a lot like dating. There’s lots of waiting, waiting, waiting, rejection, waiting, a little crying, and then suddenly, when all seems lost, potential suitors are suddenly knocking at your door.

My publishing journey wasn’t smooth—at all. Looking back, I’m sure there are things I would have done differently, but you don’t know until you know. For the longest time, I didn’t even know what genre I should be writing in. I stuck with the same fantasy manuscript for seven years, dabbled in young adult, some dystopian, and finally found my footing with thrillers. Crime, specifically.

Hello, Transcriber was the fifth manuscript I queried. I’d even pitched it at a convention to four agents who gave me four green lights to send them the manuscript. Weeks later, I got one no, two no responses, and one “I can’t sell this.”

So, I went back to cold querying, and I’ll share some of the best advice I got from the internet, of course: Don’t stop until you get 100 rejections.

I don’t know where I was at in my rejection count when I discovered my agent, Sharon Pelletier of Dystel, Goderich, & Bourret. I felt an instant connection with her: she’s a former Barnes & Noble bookseller like myself, is pro Oxford Comma, and her bio stated she isn’t into hard-drinking, hard boiled detectives. I was sold, so I queried her, careful not to get my hopes up. And, after reading the twenty-five sample pages with my submission, she requested the full, and the following Monday, she emailed to ask if she could give me a call.

After that, there were several literary agents interested in representing me, but in the end, I knew Sharon was the right one.

We worked for months to whip the manuscript into shape and while on submission, it was receiving great feedback, but ultimately getting rejected. I paid attention to the common criticisms: too literary, not enough suspense. There was one editor in particular, Leslie Gelbman from St. Martin’s Press, who provided really thoughtful feedback and what she would like to see if I decided to revise and resubmit. I remember I was going on a work trip to Ohio for several days. So while I was in the airport, on the plane, or in my hotel room at 4 a.m, I overhauled my manuscript.

When I returned, we resubmitted and she came back with a two-book deal. There were other editors interested at that point, but Leslie believed in me first and she was ready to do a deal that day. I think that speaks volumes—someone believing in you before anyone else does.

You have beautiful ink on your arms. What’s the significance of the T-rex skeleton and the feathers?

Thank you! I have a lot of ink, and I owe most of it to Molly at Arcane Rose Artistry in Illinois. I’m up to ten tattoos now—and counting—though I feel like my sleeve should count as more than one.

The “feather” that you see in my author headshot is actually a palm frond that now frames a whole Jurassic Park-themed sleeve. And then, of course, I have the T-rex skeleton on my left forearm. There’s no real deep significance to having all these dinosaur tattoos. I’m just living out my obsession for Jurassic Park. I think twelve-year-old me would be pleased.

Just kidding, haha. I’m actually working on a third Black Harbor novel with a medical examiner who follows a trail of morbid clues to find her missing daughter. Stay tuned!

Always be searching. Inspiration can be found anywhere, even in the darkest, most mundane of places. Not only is it fodder for your story, but it gives you an appreciation for the world around you as well. 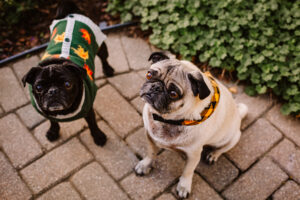 Special ability: can summon the hurt of the world in his eyes upon hearing the word “No”

Hannah Morrissey is a three-decade survivor of Wisconsin winters. Her education began at a two-room schoolhouse and concluded at the University of Wisconsin – Madison where she earned her BA in English with an emphasis in Creative Writing.

Between roles of bookseller and copywriter, she spent three and a half years transcribing police reports and contemplating her debut novel, Hello, Transcriber. She lives with her husband who is a police lieutenant, two pugs who sleep beside her while she writes, and a TBR pile that never seems to get any smaller.

When not writing, Hannah enjoys reading, rollerblading, kickboxing, traveling, and photography. Connect with her on Instagram and Facebook. 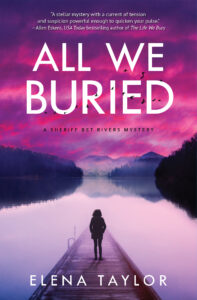