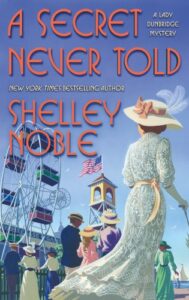 Philomena Amesbury, expatriate Countess of Dunbridge, is bored. Coney Island in the sweltering summer of 1908 offers no shortage of diversions for a young woman of means, but sea bathing, horse racing, and even amusement parks can’t hold a candle to uncovering dastardly plots and chasing villains. Lady Dunbridge hadn’t had a big challenge in months.

Fate obliges when Phil is called upon to host a dinner party in honor of a visiting Austrian psychologist whose revolutionary theories may be of interest to the War Department, not to mention various foreign powers, and who may have already survived one attempt on his life.

The guest list includes a wealthy industrialist, various rival scientists and academics, a party hypnotist, a flamboyant party-crasher, and a damaged beauty whose cloudy psyche is lost in a world of its own. Before the night is out, one of the guests is dead with a bullet between the eyes and Phil finds herself with another mystery on her hands, even if it’s unclear who exactly the intended victim was meant to be.

Worse yet, the police’s prime suspect is a mystery man who Phil happens to be rather intimately acquainted with. Now it’s up to Lady Dunbridge, with the invaluable assistance of her intrepid butler and lady’s maid, to find the real culprit before the police nab the wrong one . . .

My Thoughts on A Secret Never Told

This was my first introduction to Shelley Noble’s Lady Dunbridge Mysteries, and it definitely won’t be my last. Despite the fact this title is the fourth in the series, it’s easily enjoyable as a standalone. Noble fills in just enough of the past to clue readers into events and relationships from earlier books.

A Secret Never Told opens with Philomena Amesbury, the Countess of Dunbridge, on Coney Island, sitting on the Manhattan Beach Hotel’s veranda sipping a glass of champagne. From page one, the author plunges us into New York in 1908. Filled with historical details and smart descriptions from cars to clothes to social status, Noble does an excellent job of setting the scene.

The characters are delightful, even though it’s a rather large cast. From Phil, as the countess is called by those near and dear, to her friend Bev, who owns two horses she races at the Brighton Beach track. From her plucky maid, to an unflappable butler, not to mention a brave-to-the-point-of-foolhardiness newsboy, and a host of law enforcement officers, detectives, and a mysterious agent who may or may not work for the government, Noble peoples her work with dynamic personalities.

Called upon by an acquaintance—Godfrey Bennington—to act as hostess for a dinner party back in the city, Phil soon finds herself mixed up with several psychoanalysts, all vying to have their pet theories recognized as the latest thing, alongside a hypnotist, and two unexpected guests who show up with secrets and complicated histories that weave in with the academic set.

Phil manages to sail through  the tricky waters of several large personalities, only to have one of the guests end up dead. Not to be held back by decorum or official investigations, the countess sets herself, and her band of assistants, on the trail of the killer, potentially putting a target on her own back. Despite help (or is that hindering?) from official sources, Phil uses all her connections to keep herself and her crew out of harm’s way, while still pursuing the truth, no matter who it outs.

With a touch of romance, Phil not only faces down a killer, she also navigates the intricacies of preserving her social status and working around the expectations put on her gender. For those who love historical mysteries with strong female sleuths, A Secret Never Told fits the bill.

She is a New York Times and USA Today bestselling author of nine novels of women’s fiction. WHISPER BEACH and BEACH COLORS, were Amazon and Nook bestsellers.

The latest, LUCKY’S BEACH, was published in June 2020.

A former professional dancer and choreographer, Shelley lives at the Jersey shore where she indulges her passion for lighthouses and vintage carousels.

Visit all the stops on the Great Escapes Book Tour!

November 23 – Cozy Up With Kathy – REVIEW