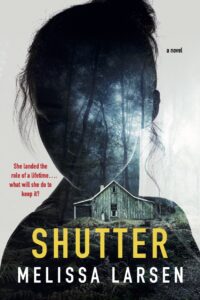 A young woman agrees to star in a filmmaker’s latest project, but soon realizes the movie is not what she expected in this chilling debut novel.

In the wake of her father’s death, Betty Roux doesn’t allow herself to mourn. Instead, she pushes away her mother, breaks up with her boyfriend, and leaves everything behind to move to New York City. She doesn’t know what she wants, except to run.

When she’s offered the chance to play the leading role in mysterious indie filmmaker Anthony Marino’s new project, she jumps at the opportunity. For a month Betty will live in a cabin on a private island off the coast of Maine, with a five-person cast and crew. Her mother warns against it, but Betty is too drawn to the charismatic Anthony to say no.

Anthony gives her a new identity–Lola–and Betty tells herself that this is exactly what she’s been looking for. The chance to reinvent herself. That is, until they begin filming and she meets Sammy, the island’s caretaker, and Betty realizes just how little she knows about the movie and its director.

Tell us about Betty Roux:

Betty Roux is a runner. If we’re aligning people by their fight or flight reflexes, we meet Betty in pure flight mode. Her father, the person she is closest to in this world, passes away and she just runs. She breaks up with her longtime boyfriend, alienates herself from her mother, and leaves her hometown, finding herself in Brooklyn, sleeping on her high school friend’s couch. She’s vulnerable and she’s reeling.

But there’s a layer of steel propping her up. She’s tougher than you think. Basically—I adore her. She’s trying to find her footing in the middle of an emotional hurricane.

A private island off the coast of Maine sounds like the perfect place to set a novel of suspense. Describe the island for us. How did you come to choose that location?

In the first drafts of Shutter, the filming actually took place in Upstate New York. This setting hadn’t always felt exactly right to me, but it was compelling (as a person who grew up in California, I find east coast forests to be very spooky!).

I was searching for writing retreats in the area to get a better feel for the forest, instead found the Norton Island Residency for Writers and Artists in Maine, and everything just clicked. The images of Norton Island’s woods and rocky shores and the cabins hidden in the trees—it was Shutter as I had imagined it.

When I finally made it to Maine, it was as though I had stepped inside my own novel. I spent the eleven/twelve days I was there rewriting Shutter to take place on a private island off the coast of Maine!

The island was small—fairly easily traced in a hike—but wild. In places the forest floor was covered in tight, wet moss, so it felt like you were bouncing on sponges, other times it was dry and sandy, or covered in patches of prehistoric-looking boulders, or boggy to the point where I felt like I was going to disappear in a mud puddle.

The trees grew close together, and they spoke in the wind. Some days it was hot enough to sweat, other days it hailed. The only wildlife were loud birds, skittish deer, and raccoons that swam to hunt for fish and crabs (did anyone know that raccoons can swim?). It could also be entirely terrifying, at least to me. The dark in the evening was complete. The island’s owner—the man who started and ran the retreat—once dared me to turn my flashlight off on my walk back to my cabin and see how long it would take me to panic.

I made it about five seconds, and even with the flashlight on I ran back to my cabin because I was convinced that somehow I was being followed. I could keep describing this island forever and I still haven’t even mentioned how close I felt to my companions on the island. It is a fairy tale world, all on its own!

What was your journey like to getting your first novel published?

I was pretty fortunate in my publishing journey! I left a job at Penguin Random House to pursue my MFA, and on my way out, one of my coworkers told me to get in touch with an agent named Jamie Carr—she thought we’d be a good fit. Jamie and I met for a coffee, and that meeting has convinced me that love at first sight is real (I am still, to this day, in awe that I get to work with her!).

I knew she was the one I wanted to submit my novel to—I just had to finish writing it.

I did, and she and I officially signed after my first year of the MFA.

She sent it out on submission that fall, and we tentatively landed with Danielle Perez at Berkley. I rewrote the novel based on an editorial letter from Danielle, resubmitted it to her months later, and we made a deal! This was a lucky journey all around—I’m blessed to work with two very impressive women.

“My experience in the industry absolutely helped me publish my first novel.”

How did working in the publishing industry help or hinder you in publishing your first novel?

My experience in the industry absolutely helped me publish my first novel. It introduced me to my agent, and after spending years evaluating manuscripts and writing editorial letters, I felt somewhat prepared to handle enormous revisions. I quickly learned that it’s an entirely different experience when it’s your writing, but I do think it has helped me put edits into perspective.

In a similar vein, the publishing industry and its procedures are made very opaque to outsiders, so knowing what goes on behind the scenes, at least in some ways, is comforting.

What question would you like to be asked about your debut novel?

Oh, this is such a wonderful and tough question. I’ll give myself an easy-ish one: Who is your dream cast of Shutter the film?

For the Big 3, Betty, Anthony, and Sammy, I see someone like Bella Heathcote or Emma Roberts, Ezra Miller or Bill Skarsgård, and Jesse Plemons (maybe Jake Gyllenhaal if Jesse’s schedule doesn’t line up).

Love this cast! Elena says, that movie should be made!

I’m in a drafting phase right now! I have been grieving Shutter as much as I am celebrating its release—Shutter and Betty and I are very close friends, so I am sorry (even as I am relieved) that I am no longer writing in that universe.

But I’m falling in love again with a new novel!

There’s the obvious: write and keep writing and don’t stop writing. But what the MFA and my experience in publishing taught me is to also read, keep reading, don’t stop reading—and read critically.

This applies both to your own writing and to published works. (Word of caution: a published novel has gone through a lot of revision and polishing, so don’t be hard on yourself in this next part)

Consider one of your most recently loved novels. Pick apart its structure. Its sentences. Look at it (in its entirety and its separate parts) like you’re a mechanic and this is a beautifully engineered machine.

Think about what the text is doing and how it does it. Do the same to your own writing, especially in revision.

But also, enjoy your reading and your writing. Write the story that you are dying to read.

Great advice! Thanks for hanging out with us, best of luck with your launch! 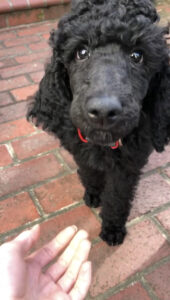 Melissa doesn’t have a pet, but I had to include this adorable photo of Iris!

Melissa says, “My grandfather recently adopted a poodle puppy named Iris and I have to share this photo of her, because she is perfect.

In this photo, she is about nine weeks old and she weighs around eight pounds (she will eventually reach about sixty pounds!).” 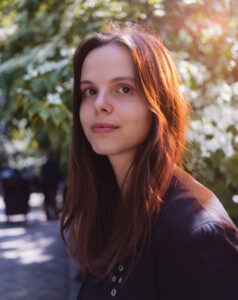 Melissa Larsen has an M.F.A. from Columbia University and a B.A. from NYU’s Gallatin School of Individualized Study.

She has interned and worked extensively in publishing. Shutter is her first novel.