Murder Most Viral: Sleuthing in the Digital Age

Murder Most Viral: Sleuthing in the Digital Age

Thrilled to host ITW Debut Author Olivia Blacke on my blog today with her guest post: Sleuthing in the Digital Age.

Sleuthing in the Digital Age by Olivia Blacke

It’s Murder Most Viral in Killer Content, a Brooklyn Mystery. In this Cozy Mystery, spunky Louisiana native Odessa Dean has three months in the trendy Brooklyn neighborhood of Williamsburg to make new friends, explore all that NYC has to offer, and solve a murder.

Odessa, a perky Southern waitress, is not a detective. Even though she’s been described by an Instagram reviewer as “a millennial Miss Marple,” she has no desire to be a detective—until her fellow waitresses plummets to her death in the background of a viral video.

Everyone else is eager to write it off as an accident, but Odessa knows that there is more to Bethany’s death. Determined to uncover the truth, Odessa embarks on an investigation that crisscrosses between the internet and Brooklyn, getting to know many quirky characters as she searches for the killer.

It’s Murder Most Viral in Killer Content, a Brooklyn Mystery.

Odessa doesn’t have any formal detective training, unless you count a minor obsession with true crime podcasts. She doesn’t have access to city security cameras, witness statements, or other police resources.

But she doesn’t need them, because most of the same information is already freely available on the internet. Footage of a flash mob proposal video that catches Bethany’s death in the background is all over YouTube. Several social media platforms play a role in locating suspects and verifying their alibis. Motives are hidden in plain sight in Instagram posts, text messages, and Venmo transactions.

The connectivity apps help locate new clues, however the majority of the action takes place IRL in Williamsburg and other nearby neighborhoods.

As Odessa interviews potential suspects, she gets to explore Brooklyn, and as readers, we get to experience New York City through her eyes. Particularly in a time where travel is difficult, it is great fun riding the subway with Odessa and hanging out in the bustling bookstore-slash-café where she works where the only thing more popular than the chef’s artisanal sandwiches is the wide selection of cold, craft beer.

She helps facilitate a crowded book signing, bargain hunts at second-hand stores, and samples a wide variety of food truck cuisine, all while gathering evidence (without falling into too many internet holes) and getting to know Brooklyn better. She may not know her way around the neighborhoods she visits or have the subway map memorized yet, but there are a variety of apps that help her navigate the big city. 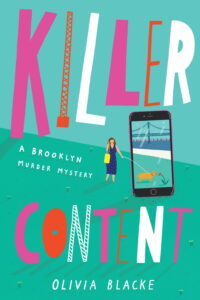 KILLER CONTENT (#KillerContentBook)—now available at Amazon and other bookstores in trade paperback, e-book, and audiobook—is a modern cozy mystery for a digital age.

Described as “#MURDER, SHE TWEETED!” by a GoodReads reviewer and “Refreshing fare” by Kirkus Review, like most mysteries, KILLER CONTENT is a scavenger hunt, except now the plucky heroine Odessa is assisted by virtual breadcrumbs as well as physical ones.

To purchase the book, click the following link for multiple locations: Penguin/Random House 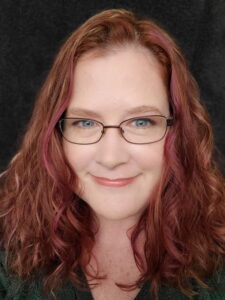 After shuffling around the U.S.A. from Hawaii to Maine, she currently resides with her husband and their roly-poly rescue puggle, but is forever homesick for NYC.

In addition to writing, disappearing into a good book, and spending way too much time on social media, she enjoys SCUBA diving, crocheting, collecting tattoos, and baking dog cookies. She is represented by James McGowan of the Bookends Literary Agency