I’m thrilled to host fellow Crooked Lane Books author Elizabeth Breck as part of her Great Escapes Virtual Book Tour. To visit all the stops along the way, click the link here.

Enter the Rafflecopter by clicking the link here. 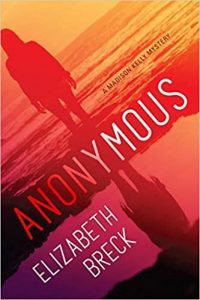 The note was threatening enough–but its link to two cold cases and a sinister unseen presence sends P.I. Madison Kelly on a frantic search for the truth.

Madison Kelly, a San Diego private investigator, arrives home to a note stabbed to her front door: Stop investigating me, or I will hunt you down and kill you. The only problem? Madison hasn’t been investigating anyone–she’s been taking time off to figure out what to do with her life. But how does she prove a negative? The only way to remove the threat is to do exactly what “Anonymous”, the note writer, is telling her not to do: investigate to see who left it. Could this have something to do with the true crime podcast she’s been tweeting about, and the missing girls?

The girls went missing, two years apart, after a night at the clubs in San Diego’s famed Gaslamp Quarter, and Madison had been probing the internet for clues. She discovers that someone has been one step ahead of her, monitoring her tweets to prevent her from getting too close. Soon Madison’s investigation brings up more questions than answers: are the disappearances connected? Are the girls dead or did they just walk away from their lives? And who is Anonymous, the person who will stop at nothing to keep Madison from learning the truth?

As she closes in, so does Anonymous. Set against a backdrop of surfer culture and coffee houses of San Diego, Anonymous follows Madison as she confronts the reality of the girls’ disappearance in a terrifying climax where the hunter becomes the hunted–and Madison is running for her life.

To buy the book, click on any of the following links:  – Amazon – Penguin Random House – B&N –BookShop

You are a licensed private investigator with the state of California. What’s the balance for you between keeping things authentic and the freedom in creating a fictional world?

Authenticity is priority one for me. When I’m reading mystery/thrillers, I hate it when the PI does something that is unrealistic. So when it came time to write my own series, I wanted to make sure that everything that happened would have happened in the real world.

That isn’t hard to do, because I’ve been a PI for so long that it is just second nature. When I create a fictional situation for the main character, Madison, I just put myself in that fictional situation and ask myself “What would I do in this situation?” and start writing. So everything is based in the reality of what it means to be a female PI.

Tell us about Madison Kelly.

Madison is thirty-five and has been a PI for years. She does the job better than most of the men who dominate her chosen field. She is five feet, eleven inches tall and loves all things Ralph Lauren. However, no one would call her girly: she doesn’t spend a lot of time fussing with hair and makeup.

She is often found wearing yoga pants, Chuck Taylor sneakers, and a jean jacket or Ralph Lauren flak jacket. That doesn’t mean she isn’t feminine; she is just her own kind of girl. She is confident, really smart, and quiet, which gives her an air of mystery. She is a loner who doesn’t have a lot of friends.

Her love interest is Dave, a champion surfer with a black belt, who surfs at the beach by her apartment. He appreciates her independence and the fact that she doesn’t need a guy to complete her—even if that leads to some difficult situations with them. Madison has a lot of what many would consider male attributes: strength, power, bravery, lack of crying over little things. She doesn’t “act tough,” because she doesn’t need to; she has a core strength and confidence that comes naturally to her. However, buried underneath it all is emotion that her stoic exterior belies: sadness that comes from too many losses in life.

Madison often says that she doesn’t cry, because “sometimes if you start crying you’ll never stop.”

In 2013, you went back to college to earn a bachelor’s degree in writing. What drove that decision?

I was getting older and looking for a way to move into a career that was less physically strenuous than being a PI; surveillance work is exhausting and I knew I couldn’t do it forever. I’d decided to become an attorney, so I went back to school to get my BA and then go to law school. That’s why I was getting straight As—I wanted a full ride to law school. I was still working full time, so I began writing about my work for some of my writing workshops, including nonfiction travel writing, as well as writing a short story about Madison Kelly for my honors thesis.

I’ve always been artistic, and that art has taken a variety of forms, including writing fiction throughout my life. And then I got breast cancer in my senior year, which derailed my plans to go straight into law school. I thought I’d take a year off, but during my recovery from surgery, I realized what I really wanted to do was be an author and write about Madison Kelly!

What role does Hubert play in your careers, does he ever go out on an investigation with you? Is he a good office mate when you’re writing? 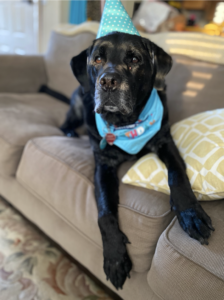 Here is a photo from his tenth birthday, which we just celebrated!

When he was a puppy I took him on surveillance with me and he HATED it.

I couldn’t leave him at home when he was so little, and it was helpful to get a better look at a house if I was walking a dog in front of it. But we had to sit inside the car for hours, and he would look outside the window as if to say, “I want to be like the dogs that get to go outside.”

Now he can stay home by himself because he won’t eat my rugs anymore, and of course if I’m gone for any length of time someone comes to walk him. But now if I take him with me to even just to run errands, the second I turn off the car he starts to whine because he’s afraid we’re doing surveillance!

I can’t even finish a phone call before getting out of the car; once the car is turned off we have to get out or he starts to cry that he doesn’t want to do surveillance.

However, he loves to lie on my foot and lick peanut butter out of his Kong while I write every morning at my desk. It is our routine.

San Diego is also my hometown, but it’s changed a lot since I was a kid. What are the pros and cons of being a private investigator in San Diego?

There are only pros, no cons, to being a PI in San Diego: it is easy to get everywhere, no matter where you’re doing surveillance it is beautiful, and the weather is good (for the most part; this summer has been brutal).

I’ve done surveillance all over the country, and San Diego is the best city!

I’m working on edits for the second novel in the series, which is already written and due out in November 2021. So as soon as everyone has finished talking about Anonymous, you’ll have another book to read!

Want to learn more about Elizabeth’s road to publication? Visit her website by clicking the link here and sign up for her newsletter!

My Thoughts on Anonymous by Elizabeth Breck

Breck’s background as a private investigator shines through in her understanding of how the job really works. Her details about what Madison can and cannot (legally!) do and how she thinks about her career provide an authentic voice often missing from fictional private detective novels.

Set in my hometown of San Diego, I enjoyed traveling through a city I lived in for more than twenty years and still visit regularly. Whether you know the city or not, the descriptions will take you on a tour around town as if you were hanging out with a local for the weekend.

Putting her PI in personal danger right at the beginning of the novel definitely increased my interest in Madison. I wanted to see how this smart, sassy young woman would deal with all the challenges that Breck would throw at her. And the challenges are plentiful!

Breck does a good job of keeping the obstacles big and raising the stakes throughout.

With a steady pace and enough excitement to build to a satisfying climax, Anonymous definitely held my attention to the end. 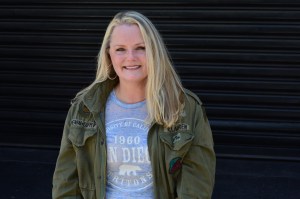 ELIZABETH BRECK is a state of California licensed private investigator.

A native Californian, she had read Harriet the Spy twenty times by the time she was nine, so it was no surprise when she grew up to become a PI.

She has worked mainly in the field of insurance investigations, making her the real-life version of Sue Grafton’s Kinsey Millhone.

Visit all the stops along the Great Escapes Virtual Book Tour!

November 7 – I’m All About Books – SPOTLIGHT