An amateur sleuth can make for some of the best crime fiction. Edwin Hill creates an intriguing and dynamic character with his research librarian Hester Thursby, who puts her skills to the test in the first two books of his series. Thrilled to have Edwin Hill on my blog this week to chat about his inspirations for writing his series.

Looking for more strong female amateur sleuths? Have you checked out the Clare Carlson series by R.G. Belsky? Click the link here to read more. 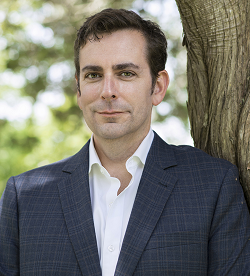 Edwin Hill was born in Duxbury, Massachusetts, and spent most of his childhood obsessing over The Famous Five, Agatha Christie, and somehow finding a way into C.S. Lewis’s wardrobe.

After attending Wesleyan University and graduating with a B.A. in American Studies, he headed west to San Francisco for the dotcom boom. Later, he returned to Boston, earned an MFA from Emerson College, and switched gears to work in educational publishing.

He lives in Roslindale, Massachusetts with his partner Michael and his favorite reviewer, their lab Edith Ann, who likes his first drafts enough to eat them. 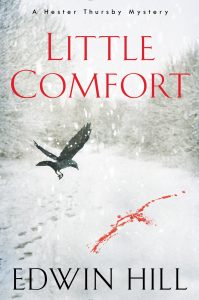 Harvard librarian Hester Thursby knows that even in the digital age, people still need help finding things. Using her research skills, Hester runs a side business tracking down the lost.

To Buy the Book, click on the following link: Amazon 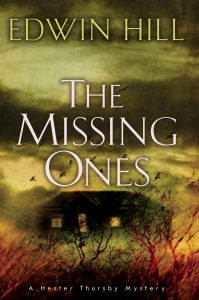 Edwin Hill, author of the acclaimed Little Comfort, returns with his next book featuring Harvard librarian Hester Thursby—an intimate, intricate mystery as smart and complex as it is riveting.

“A conflicted protagonist battles formidable opponents in a bid for a normal life.” Kirkus

“Hill is adept at building compassion for his characters in a tight-knit social web while implicating them in dark thoughts and actions. He remains a writer to watch.” Publishers Weekly

To Buy the Book, click on  the following link: Amazon

Your amateur sleuth is a research librarian, a brilliant set-up for a series. What gave you the idea for Hester Thursby?

My first book, Little Comfort, went through so many different revisions that I sometimes have to remind myself where Hester came from!

This book was inspired by the Clark Rockefeller case from about ten years ago. For those who don’t remember, Clark Rockefeller was a man who pretended to be a member of the Rockefeller family, married a wealthy woman, and had a child with her. When his story began to unravel, he went on the run with his daughter, and it became national news.

It turned out his name was actually Christian Gerhartsreiter, he was German national, and, ultimately, he was connected to the murder of a couple in California.

I thought this was a terrific story to use as inspiration for a novel, and for a while, I worked on a manuscript with a Tom Ripley-type antihero named Sam Blaine. I got to a point, though, where I didn’t feel that the story was moving forward enough, and that Sam needed a foil.

I also wanted to write a series, so I came up with Hester, a librarian, who uses her research skills to find missing people. To me, mysteries and thrillers are about curious people asking questions, and librarians are among the most curious people I know. I wondered what it would be like to extend that curiosity to the world of crime and missing people, and Hester was born!

I should note that Little Comfort and The Missing Ones are both psychological thrillers that are violent and deal with disturbing themes. Some readers have gone into the series expecting a gentler story and have been surprised by what they find!

“I wanted to play with class in that story, so choosing those locations was important to the plot because you find economic disparity in both.” 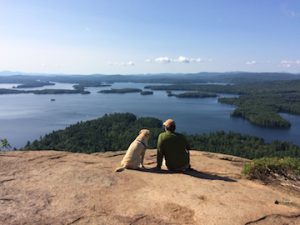 The first book in the series, Little Comfort, is set in Boston, the second, The Missing Ones, is set on a rugged, remote island off the coast of Maine. How has location and geography impacted the two books?

In the series, Hester and her longtime boyfriend Morgan live in Somerville’s Union Square, and Hester winds up exploring different parts of New England. Setting is so important to creating a good story, though I chose to set the series in Boston for a very practical reason: I live here and when I started writing I was still working full time at my day job, which didn’t leave much room for research.

All that said, I really like writing a series that’s set in New England because you can go from a very urban setting like Boston to a something different very quickly. Little Comfort is set in both Boston (Beacon Hill, to be exact) and in the Lakes Region of New Hampshire.

“I should note that Little Comfort and The Missing Ones are both psychological thrillers that are violent and deal with disturbing themes.”

I wanted to play with class in that story, so choosing those locations was important to the plot because you find economic disparity in both. Little Comfort also takes place in the winter, and I used the rural, isolated setting of the Lakes Region to increase the intensity and danger at the end of the novel.

For The Missing Ones, I wanted to write a locked room story where there would be a finite number of potential victims and killers.

I visited Monhegan Island, which is located eight miles off the coast of Boothbay Harbor in Maine and thought it would be the perfect setting for a crime. It’s a tiny, isolated island that has been an artist colony for many years, and one of the unique things about it is that no cars are allowed on the island.

Once I started writing, I realized that I’d need to create a fictional island instead of using the actual location, so I renamed it Finisterre Island.

I made the change for a few reasons, mostly because the actual island is so specific that the smallest error would have destroyed the authenticity of setting.

Ultimately, I also needed to make some changes to the landscape for plot, so it seemed best to rename the setting. Still, anyone who has ever been to Monhegan Island will recognize many details from this unique and beautiful place.

“Edith Ann never lets me forget who is boss.” 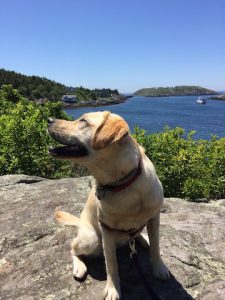 Your yellow lab Edith Ann is your toughest critic. She also has her own Instagram page – what’s it like living with a canine celebrity?

Edith Ann never lets me forget who is boss.

[You can find Edith Ann by clicking on the link here]

A quick definition of the Agatha Award: The Agatha Awards honor the Traditional Mystery, books typified by the works of Agatha Christie and others. For more information visit the Malice Domestic Website. A great place to find more books that feature an Amateur Sleuth!

The first book in the series, Little Comfort, was nominated for an Agatha. Did the success of the first novel give you a sense of relief? Or up the anxiety for The Missing Ones to live up to the debut?

For so many years (decades, actually), I never had the slightest whiff of success as a writer, so having a book published checked off all my dream boxes.

Writing a series comes with its own challenges, with two books down and a third coming out next year, what have you learned about writing a series?

I really love reading series where you learn more about the main characters in each installment. For me, the hardest part of writing this series is balancing how much information I reveal about Hester and Morgan in each book so that the novel itself is a satisfying standalone read, while holding back enough to keep interest going for a longer series.

For example, I’m already thinking forward to Book Four in the series, which will focus on Morgan’s extended family, and I want to include a few clues in Book Three that will be tantalizing, and yet not annoying or untethered. Wish me luck!

Good to know amateur sleuth Hester Thursby will be back!

I am working on the third Hester Thursby book, tentatively called BLIND SPOT (a title I can almost guarantee won’t stick!)

This novel is about four students who enroll in a sketchy for-profit art school only to be killed off one by one. Hester comes into the story when the general manager of the school hires her to find alumni without contact information. Great danger follows.

For fans of the series, much of the plot will focus on Detective Angela White, who has been a popular minor character in the first two novels.

Honestly, if I can do this, so can you. Keep working hard on what you want to write, meet as many people in your given genre as possible, and listen.  You’ll get there!

Great words of wisdom! Thank you so much for sharing your books and your amateur sleuth Hester Thursby, and your adorable dog Edith Ann with us! Can’t wait to have you back on my blog with books three and four.