Journalist and Novelist RG Belsky on Writing, News, and Hats

Thrilled to have journalist and novelist R.G. Belsky on my blog today chatting about news, writing, and his latest novel, Below the Fold.

R.G. Belsky is a longtime journalist and a crime fiction author in New York City.

Belsky has worked as a top editor at the New York Post, the New York Daily News, Star magazine and NBC News. He has also published 12 mystery novels, including his current Clare Carlson series – about a woman TV journalist. 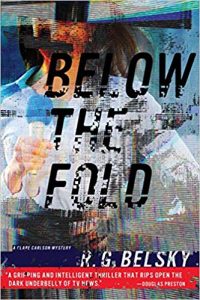 Every human life is supposed to be important. Everyone should matter. But that’s not the case in the cutthroat TV news-rating world where Clare Carlson works. Sex, money, and power sell. Only murder victims of the right social strata are considered worth covering. Not the murder of a “nobody.”

So, when the battered body of a homeless woman named Dora Gayle is found on the streets of New York City, her murder barely gets a mention in the media. But Clare―a TV news director who still has a reporter’s instincts―decides to dig deeper into the seemingly meaningless death.

“What a terrific book! A complex and compelling nonstop cat-and-mouse chase―and you’re never quite sure which one’s the mouse. Even the savviest of readers will be gasping in awe at Belsky’s impressive story-telling skills.” ―Hank Phillippi Ryan, Agatha, Anthony and Mary Higgins Clark Award-winning author

To find R.G. Belsky’s books from various retailers, click on the link here.

Your journalism career spans decades and went from print to TV to digital. How has the American public changed in how we consume news? Are we consuming more, but in smaller pieces? Less overall? Are we less discerning? Less discriminating? I’d love to hear your perspective on how things have changed and the impact that has had on society.

When I was city editor of the New York Post back in the 1980s, we sold a million copies a day – and everyone got their news from newspapers, the three TV networks or local TV stations. Those sure were heady, exciting times to be a journalist. Now print newspapers are dying off rapidly, there’s 24-hour cable news networks and many people get all their news from tablets or smart phones.

But I’m not some old “get off my lawn” curmudgeon of a journalist who wants to tell you how terrible the news business is today.

You see, I spent my most recent years in journalism developing digital websites at NBC. And I saw first-hand there the exciting and limitless possibilities we have for delivering the news to people today.

Yes, I realize the media is changing all around us so rapidly that it’s hard to keep up. But the truth is it’s always been that way.

There used to be 12 newspapers in New York City – now there are ten times that many local news outlets available online.

People once got their breaking news first from radio, then from television and now from Twitter. CNN changed the face of journalism with a 24-hour news channel a generation ago in the same way blogs and websites and social media are doing it now.

But the news is still the same.

“But I’m not some old “get off my lawn” curmudgeon of a journalist who wants to tell you how terrible the news business is today.” 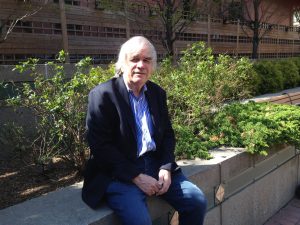 Clare Carlson, a TV news director, isn’t the first character you’ve written who works in journalism. Gil Malloy is a disgraced journalist solving crimes in a series all his own. Lucy Shannon is a reporter in Loverboy. How accurately do you depict the journalists in your novels? Do you take dramatic license in the name of advancing the story? Or remain as true as you can to your experiences in the trenches?

Oh, I take plenty of dramatic license! Clare Carlson, Gil Malloy and Lucy Shannon are not really accurate depictions of journalists and what they do. But then neither are Harry Bosch, Kinsey Millhone or Stephanie Plum accurate depictions.

The truth is that a real journalist’s life can be pretty boring on a day to day basis – and I don’t know any journalist who has ever solved a murder case on their own like Clare does in every book.

So I just try to use my experience and knowledge as a real journalist to create a fictional journalist who’s a lot more interesting!

My favorite story about this came from Raymond Chandler. Someone once criticized his Philip Marlowe character for not being believable enough as a private investigator.

“Real private investigators don’t get knocked on the head every time they go into a room or always meet beautiful blonde clients,” the critic pointed out.

“You’re absolutely right,” Chandler said. “But if I wrote about all the dull stuff a real private eye does – sitting at a desk and going through divorce papers – no one would ever read my books.”

That’s sort of the same way I feel about Clare Carlson.

How did the war in Viet Nam impact you as a writer and a journalist?

I think Vietnam impacted me more as a person than as a writer and a journalist. Going to war there at the age of 23 (I was drafted, so I had no choice) made me believe that if I could survive that, I could survive anything else life threw at me.

I did try to write a Vietnam novel soon after I got back to the U.S. and I have a Vietnam short story somewhere too, but none of them ever came close to publication. I do refer back to Vietnam – as well as some more recent wars like Iraq – in several of my books.

If I ever did write a Vietnam novel, it would probably be like M.A.S.H. from the Korean War. Vietnam and that whole era of the ‘60s was such a crazy time – fun in some ways, tragic in others.

For the record, my favorite Vietnam book is The Things They Carried by Tim O’Brien. And my favorite movie is Apocalypse Now, which perfectly captures all the insanity I remember from my own year there.

(For the record – The Things They Carried is one of Elena’s all time favorite books.)

“The biggest challenge I had when I started writing novels was telling my story too quickly.”

What (if any!) news story would you have liked to cover that you didn’t get to?

The JFK assassination. I believe this is the greatest unsolved murder cold case in American history. (And no, I don’t believe a word of the Warren Report.).

It happened before I became a journalist, but I’ve always been fascinated by many of the stories about how it was covered back in 1963.

The most famous was one about the AP and UPI reporters wrestling in the press car for the single cell phone in order to be first to break the story of the shooting. And a lot of the other live TV and newspaper stuff from then is really interesting too.

Like I said though, that was all before my time.

Not the same as the real thing, but at least this was one news story I got to write an ending for on my own! 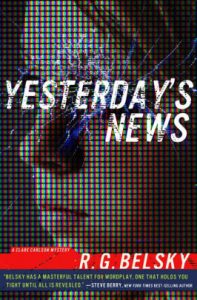 The biggest challenge I had when I started writing novels was telling my story too quickly.

That’s what a journalist is trained to do – especially a tabloid journalist like me: tell the news story as quickly as possible. Put the basic facts – who, what, why, where, when – in the lead. Short sentences, short paragraphs, short stories.

But, in a mystery novel, you can’t tell the reader the whole story on the first paragraph or the first page or the first chapter. “You’re going from A to B too fast,” was one criticism I heard. So I had to learn to slow down when telling a mystery story.

Having said that, I still try to keep the story moving as fast as I can.

I have a new Clare Carlson book The Last Scoop – the third in the series after Yesterday’s News and Below The Fold – that will be out in 2020.

I’ve also just completed a suspense thriller called The Perfect Victim – about a woman who becomes a media star after she is the victim of a horrific crime, but then discovers that everything she’s been told about what really happened to her is a lie.

I’ve also got a couple of other projects working – including a non-fiction memoir about my life and times in the real world of journalism at the New York Post (think “Headless Body in Topless Bar),” New York Daily News, Star Magazine and NBC News.

I’ve written about some of these things in articles over the years – but hope to put it together into a book one day.

I always have the same advice for anyone who tells me they want to be a writer: “Write!”

I’ve been asked this question so many times, and I always have the same advice for anyone who tells me they want to be a writer: “Write!”

There’s a lot of people who say they want to write novels, but most of them never do.

There’s only one way to find out if you can write a good novel or not: write the damn book!

Bonus Question: Are you getting a hat for Killer Nashville? Jim Nesbitt and I need to know. 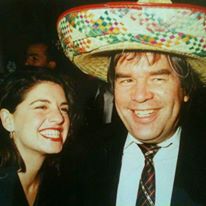 Okay, this question comes about because Elena Hartwell wears a hat at Killer Nashville that makes her look very good and very cool and very hip. (Awww . . . shucks, thanks!)

So does author Jim Nesbitt. I do not wear a hat, and I don’t look particularly good or cool or hip. So they are both pushing me to go for the “hat” look. But there is the very real possibility that wearing a hat will not change this for me, and it will simply make me look silly.

That’s a big gamble for me to take. I believe I’ve only been pictured once in a hat during my whole life (see attached — see it! I posted it!).

This was at an office party for Star magazine. I don’t recall all the details of me putting on that hat, but I’m pretty certain there was alcohol involved. Which might be the best way to get me in a hat at Killer Nashville too.

I think Jim Nesbitt and I can make that happen! Thanks for hanging out with us on my blog.

Header photo by Alexas_Fotos on Pixabay. Click the link here for more information.