Tech Thriller author Tom Chatfield is the latest ITW Debut Author to visit my blog. An expert in contemporary technology and digital culture, he’s here to chat about how truth can sometimes be stranger than fiction . . . Welcome Tom!

Do you love Tech Thrillers and Thrillers with a sci-fi or technological twist? Don’t miss my interview with S.L. Huang and her debut near-future science fiction thriller, click the link here. 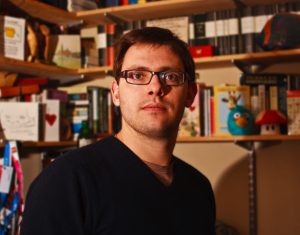 Dr. Tom Chatfield is a British writer, broadcaster and tech philosopher. He’s the author of half a dozen books of non-fiction exploring digital culture—most recently Live This Book! (Penguin) and Critical Thinking (SAGE Publishing), researched as a Visiting Associate at the Oxford Internet Institute—published in over two dozen languages.

His debut novel, The Gomorrah Gambit (Mulholland), is the first in a series of thrillers set in the world of the dark net and was a Sunday Times thriller of the month. He’s also an avid amateur jazz pianist, father to two small children, and heavily reliant on coffee for sustained concentration. 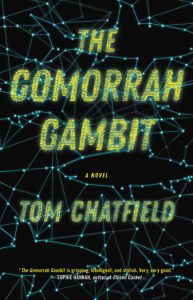 A darkly satirical tech thriller set in the underbelly of the internet, featuring the stuff of everyday 21st-century nightmares: terrorism, fascism, trafficked drugs and lives, hacked democracies and stolen identities.

All unravelled by a reluctantly globe-trotting hero who’d rather stay safely sat behind a screen in his shed.

To Buy the Book, click on any of the following links: IndieBound, Mulholland Books, Barnes & Noble, and Amazon

“Fiction either succeeds or fails on its own terms: and when you’re explicitly setting out to thrill and captivate your audience, that’s a pretty scary thing.”

I’m a slightly unusual debut novelist, in that I’ve been writing non-fiction exploring technology and 21st-century society for the best part of a decade. After years of gathering increasingly incredible stories about the world we’re living in and its unseen networks of power, I came to feel that fiction was one of the best ways I could approach what’s going on – and do so, I hope, without slipping into despair or resignation.

Fortunately for me, I found a fantastic editor at Hodder – Melissa Cox – who felt the same way. I’ve been incredibly lucky to make a relatively smooth transition from facts to fiction, although I couldn’t believe how hard it was to write a book that isn’t propped up by reality in the way that non-fiction is.

Fiction either succeeds or fails on its own terms: and when you’re explicitly setting out to thrill and captivate your audience, that’s a pretty scary thing.

I’m a total geek who has always been fascinated both by technology and by genre-bending speculative fictions: novels of ideas, thrillers that break down the barriers between sci-fi and fantasy and contemporary reality. It’s a world I’ve always wanted to be a part of, and that has fueled a lot of my non-fiction.

In technology especially, I think fiction has played a powerful role in mapping (and warning against) possible futures. I’ve spent much of the last decade looking for ways to turn my non-fictional fascinations into fiction, and I finally found the answer in the form of the dark net and the tales emerging from its users: this parallel world of anonymous marketplaces in which anything and everything is for sale, nobody is who they seem, and the strangest extremities of human behavior are laid bare.

That’s the stuff I tried to put onto the page. Although, sometimes, the reality was so bizarre or appalling that I found myself toning it down in order to make it bearable and believable.

Tech Thriller, also called a Techno-Thriller, is a book that includes a focus on the details of technology.

I have a little textbook coming out in the Fall, which will be my second book for the academic publisher SAGE addressing the topic of critical thinking.

And I’m also working away on the sequel to The Gomorrah Gambit, which should be coming out next year (provided I don’t get paralyzed by anxiety around the reception of the first book).

I’m looking forward to leaping between non-fiction and fiction over the coming years. It keeps me feeling fresh and anchored in the world.

Sounds like a fascinating Tech Thriller! Thanks for hanging out with us today!

Header photo by Gerd Altmann on Pixabay. For more information, click on the link here.