Two thriller writers for the 21st Century. Thrilled to have Brian Nelson and August Norman on my blog this week. I think they are male authors for the new millennium. One is a primary care-giver for his kids – the other writes a female protagonist. I love these guys! 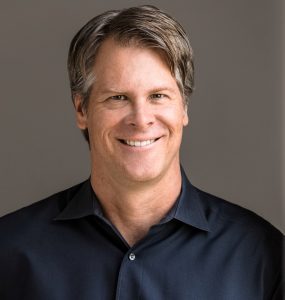 Brian Nelson is a former Fulbright Scholar who holds degrees in international relations, economics, and creative writing (fiction). His first book, The Silence and the Scorpion: The Coup against Chávez and the Making of Modern Venezuela, was named one of the Best Books of 2009 by the Economist.

His work has appeared in the Virginia Quarterly Review, Christian Science Monitor and the Southern Humanities Review, among others. He lives in Denver with his wife and two children. 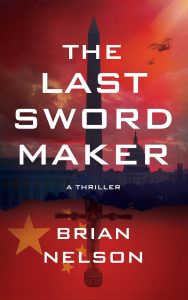 The Last Sword Maker is a thriller that imagines a new arms race between the United States and China as they race to weaponize artificial intelligence, genetic engineering, and nanotechnology.

To buy the book click on the following links: Amazon, Blackstone Publishing

This was the first book-length project I ever attempted. I started in the year (cough, cough) 2000, so it took seventeen years to reach fruition. I was doing other things during that time, including a nonfiction project (“The Silence and the Scorpion”, 2009), but I probably spent a solid six years of work on this manuscript.

One of the things I’m most proud of is that I wrote about 85% of it while being the primary care giver for my two infant sons. The funny thing is when I read the book now it’s very obvious to me what the author was going through! Even though it was unintentional, many of the characters’ motivations are linked to protecting children…and, in one case, avenging a child’s death.

There is an interesting story about how this book got sold. It almost got picked up by Thomas and Mercer, but that fell through. Then there was a “dark time” when it looked like it might not get published.

I owe a huge debt to Andrea Cavallaro at the Sandra Dijkstra Agency, because Andrea—who is technically my rights agent and not my literary agent—went above and beyond the call of duty and made the connection with Blackstone Publishing that got the deal.
So you never know!

“The prediction is that in the near future we will have man-made microscopic organisms that can make copies of themselves and are controlled by an A.I. system that is smarter than we are. Hey, what could go wrong?”

My interest in advanced technologies began when I was a computer programmer for EDS (now part of Hewlett-Packard). Like many of us, I was both fascinated and a little frightened by what the future was going to hold. I did a great deal of research on A.I., nanotechnology and genetic engineering for the book.

While most people have a basic understanding of each of these sciences, things get really interesting when you merge them together (which, in fact, the military hopes to do). The prediction is that in the near future we will have man-made microscopic organisms that can make copies of themselves and are controlled by an A.I. system that is smarter than we are. Hey, what could go wrong? (Elena here . . . so this is going to keep me up at night!!)

Fascinating stuff you’re working on! Thanks for hanging out with us today!

A lover and champion of crime fiction, August is an active member of the Mystery Writers of America, the International Thriller Writers, and Sisters in Crime (National and LA), and regularly attends the Santa Barbara Writer’s Conference. 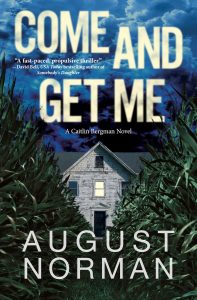 When award-winning journalist Caitlin Bergman is invited back to campus to receive an honorary degree, she finds an opportunity for a well-earned victory lap―and a chance to face the trauma that almost destroyed her as an undergrad.

But her lap becomes an all-out race when a student begs her to probe an unsolved campus disappearance.

To find the missing woman, Caitlin must join forces with a local police detective from the department that botched her own case so long ago―before she becomes the newest addition to a twisted killer’s collection.

While Come and Get Me is my publishing debut, it was actually my second marketable finished manuscript.

I’ve always written, though in my twenties and early thirties concentrated more on screenplays, but once I had that first manuscript, a prequel to Come and Get Me, I made the standard mistakes – submitting and querying too early, ignoring the advice of published authors, generic query letters, etc.

Luckily, I attended my first conference in 2011, the annual Santa Barbara Writers Conference. Not only did the conference concentrate on craft, I also met agents, editors, and writers of all levels of success.

That network of wonderfully gifted and giving people led to my first agent, who taught me to self-edit, and partially submitted that first manuscript. After a major life event, cough (divorce) cough, I parted ways with my first agent as well, and found another more fitted to my temperament (Once again, through a pitch session at the SBWC. I don’t think I’m bad at query letters, but I’m much better ‘in the room,’ as they say).

That new agent, the wonderful Eric Myers (Myers Literary Management) took my first manuscript out for some wonderful rejections while I worked on Come and Get Me, a book I knew to be much stronger than the first in all ways. Crooked Lane Books purchased Come and Get Me and a second Caitlin Bergman novel to be released in 2020.

“I wanted Caitlin, the strongest character I’d ever written, to solve the unsolvable, albeit with realistic costs in her life, fictional as it may be.”

Caitlin Bergman began as a secondary POV character in my first manuscript. As I looked at that first work in regards toward developing a long-term series, I knew she was the stronger, more dynamic character that people would identify and root for, despite her flaws.

At the same time, several horrible, and even unsolved to this day, things happened in Midwestern college towns, including my alma mater of Indiana University in Bloomington, Indiana.

My college years gave me some of my longest lasting friendships and memories, but I knew that not everyone has that opportunity, nor the ability to enjoy that time (ie, 1 out of every 6 women).

I wanted Caitlin, the strongest character I’d ever written, to solve the unsolvable, albeit with realistic costs in her life, fictional as it may be.

As contracted, I’m continuing with Caitlin Bergman’s life in the next book of a series (not a sequel).  Back in Los Angeles, Caitlin’s suddenly faced with the death of her birth mother, a woman she’s never met.

A trip to Coastal Oregon to pick up the pieces turns into an honest look at her adopted parents, a fight with a cult, and a mass grave.

Does this mean I’m building my own religion? Kind of. Hopefully, no one will follow it.  Send checks, sure, but don’t follow the rules!

Congratulations on the continuation of Caitlin’s story! Can’t wait to learn more.