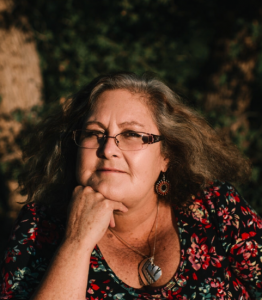 Carol Potenza lives in southern New Mexico with her husband, Leos, and love for the desert southwest. She has a breathtaking view of the Organ Mountains from her backyard.

Her day job is teaching biochemistry to undergraduates at New Mexico State University, a Land Grant University established in 1888. Before teaching became a full-time position, she conducted plant genetic engineering research, also at NMSU, and worked briefly on the Jornada Experimental Range north of town and at a drug-testing lab.

The beauty of New Mexico is the inspiration for her books and will continue to be for years to come.

In Hearts of the Missing, Fire-Sky police sergeant Nicky Matthews investigates the tragic death of a young woman and makes a stunning discovery that leads her to a list of missing tribal members. She must carefully navigate the culture and traditions of the Pueblo in her search for answers as well as contend with departmental jealousy and undercover federal agents.

But when Nicky’s closest friends are put in danger, she may have to make the ultimate sacrifice to save then and the spirits of those already taken.

I decided I wanted to write books after I retired and started doing just that one January. In a year or so, I’d completed two books in a different genre: the first one was to ‘learn’ how to write fiction (and will never see the light of day), and the second, I may one day self-publish under a different name. After I started Hearts of the Missing, I queried it directly to an editor at a small writer’s conference. She requested a full manuscript, but ultimately rejected it. I was kind of glad about that because I’d found out about the Tony Hillerman Prize and wanted to enter. I in no way thought it would win. I was just hoping for feedback. When I received the call from a St. Martin’s Press editor a few months later, she asked me if I was sitting down. I did, and was glad of it after she told me I’d won. The news literally made me weak at the knees!

Three things were the ‘seeds’ for Hearts of the Missing: true ghost stories, a pendant, and science twisted to fiction.

Ghosts first. It turns out some of my relatives are ‘sensitive’. They see spirits, ghosts, shadows, or hear ‘scenes’ from the past. We were sitting around one night and they were exchanging stories. I was fascinated—and creeped out like you wouldn’t believe. Goose bumps everywhere. I loved it. When they were finished, I made a comment, something like, ‘I’ve never seen anything supernatural’, and one of them said, ‘How do you know? A ghost or a spirit could be a person sitting at a bus stop or standing next to you in a crowd, but we never think to question that ‘what we see isn’t reality because it looks so normal’. That statement stunned me. I actually put something very similar to that in HOTM.

The pendant is a piece of Zuni petit point my husband and I purchased on a trip to Chaco Canyon one spring. It’s shaped like the rays of the sun, the silver filled with slim coral sticks. It also has an open circle in the center divided by an cross—like the chambers in a heart. I haven’t seen anything like it since. The only problem is that the coral pieces fall out. I made up a short story about how these pieces of stone represent missing people, called the pendant type a ‘Spirit’s Heart’—also in the book—and blended that story with the ghost stories.

A description of the science will give too much of the plot away, so you’ll have to read the book to see how this ‘seed’ weaves in with the ghost stories!

I’m editing the second Nicky Matthews book—also a blend of police procedural, ghosts and spirits, and science twisted to fiction—writing the third, and researching the fourth. I’ve always planned at least four books, each themed for one of the elemental clans in Hearts of the Missing: earth, fire, water, and sky

Great to have you here, Carol! Thanks for visiting with us. 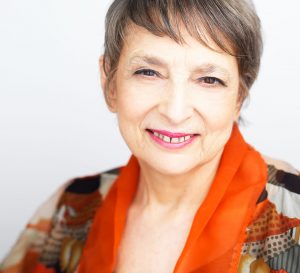 Loretta Goldberg is an Australian-American, Loretta earned a BA in English Literature, Musicology and History at the University of Melbourne, Australia. After teaching English Literature at the Department of English for a year, she risked all, coming to the USA on a Fulbright scholarship to study piano with Claudio Arrau.

She earned an MA (music performance) from Hunter College, New York; and a Chartered Life Underwriter degree from the American College, Pennsylvania. Member of the Historical Novel Society, New York Chapter, she started and ran their published writer public reading series at the landmark Jefferson Market Library. This is her first novel.

The Reversible Mask is about an Elizabethan courtier, Edward Latham, torn between his Catholicism and the Protestant government. The contemplative life isn’t for him—he wants action– so he throws up prospects and family in 1566 to go abroad and spy for European Catholic monarchs. His missions take him to the Brussels bed of the greatest woman singer of the day, an Emperor’s concubine; to Constantinople, where he witnesses the fearsome comet of 1578; to the River Scheldt when the first self-detonating bomb ship explodes, with devastating effect.

But when Europe’s religious wars threaten England he becomes a double agent, penetrating plots and battle plans to help his Queen and home country prepare for invasion.

You can find the book on Amazon and IndieBound.

Describe your publishing journey, is this your first manuscript?:

Yes, it’s truly a debut. When I was a child, my parents insisted that I never make anything up. My father was a distinguished accountant who lived for balance sheets, while my mother equated fantasy with “madness.” I taught English Literature, then was a concert pianist and financial advisor. It’s been an astonishing mid-life adventure to un-creak my imagination. I think I’m still sane!

The toughest challenge has been structure. I wasn’t prepared for that, because as a classical musician I did good Liszt and Copland climaxes. I thought the skill would transfer. It didn’t. Creating momentum from the characters’ vicissitudes took more false starts than I can count. I was lucky to have an agent, John A. Ware. I was thrilled to read on your blog that one of your other writers, Deirdre Feehan, was also his client. (Click here to read Deirdre’s interview). I’d love to swap “John” stories with her. He represented me in a non-fiction project, but urged me to try fiction until he died.

After that I had helpful critique groups. Of course, I got rejections when I looked for another agent and publication. My opportunity came from the Historical Novel Society Portland Conference in 2017. They have a mentor program. You submit ten pages and they match you with a published writer in your field. The mentor edits your submission and gives you a fifteen-minute interview. My mentor was generous enough to refer me to her publisher, MadeGlobal Publishing, which wanted the book. Large dose of luck.

A historical person, Anthony Standen. A Catholic from a solid Surrey family, he left England before Latham does, and spied for Catholic Spain. Yet he also spied for Elizabeth from the 1580s until he was blown in 1592, beyond the time of my novel. His letters to his English handlers, the Bacon brothers Sir Francis and Anthony, grabbed me. I felt that Standen’s inner conflicts epitomized, in pure form, dilemmas we face in modern life: a tobacco executive pays his children’s college bills with profits from cigarettes he knows are poison. Most of us compartmentalize. Standen couldn’t. What split could be more profound than a Catholic who believed in transubstantiation and a physical hell yet risked his life to protect his heretical birth country?

I wanted to wander in his world. The upheavals of the sixteenth century were a backdrop that for me has modern relevance. The printing press had spawned outpourings of dissent, provoking institutional leaders to clamp down with cruelty. It was a little like our wild-west digital media. There was a siren call of religious martyrdom, while new learning, mechanical innovation and far-off lands generated excitement. Social turbulence becomes a character in the novel. Latham is the only one with split loyalties, but everyone from queens to peasants and balladeers is affected by this lumbering oaf, change.

Another dimension is Latham’s individual moral code. With spies, betrayal is built in. But what won’t he do? How does he define the higher purpose he’s sacrificed his patrimony for? In creating this side of his personality I was inspired by a modern spy, the “Green Prince.” He is the son of a Hamas leader but spied for Israel for ten years.

As a new writer, blogs and articles. I’m also active in the Historical Novel Society, New York Chapter. I run public readings by published HNS writers at the Jefferson Market Library, New York. But a sequel calls. Latham and other lovable rogues from The Reversible Mask return in a short tale about the fight between Elizabeth I and the Hanseatic League. I’m a sucker for moments when power relations wobble.

The Hanseatic League was an international merchants’ association of towns that had controlled tariffs within states for five hundred years, their monopolies backed by their own military forces. But when Francis Drake captured a Hansa merchant convoy taking war materials to Spain after the defeat of the Spanish Armada in 1588, the cargoes were litigated in the English admiralty court, subordinating the Hansa to a nation state and breaking its monopolies.

Latham, along with his autistic manservant and the servant’s pert wife, discover the convoy’s route, and Latham testifies at a trial. There’s a new fictional character I’m in love with, a Fleming Hansa merchant and his banker’s-daughter wife who are caught between the contesting sides.

Both debut novels sound fascinating! Might make good presents for a mystery reader on your holiday gift list?