One Teen Thriller, One Historical Mystery, and One TV Comedy Writer Who Kills….

I’m thrilled to introduce this week’s ITW Debut authors: Demetra Brodsky, Cari Davis, and Matt Goldman. These authors all bring something unique to their craft. A little something for every reader!

She has a B.F.A. from The Massachusetts College of Art and Design and lives in Southern California with her family of four and two lovable rescue dogs where she is always trying to make more time for the beach.

Dive Smack is dedicated to Pumpkin, the monarch butterfly she once saved from the brink of death. Once you read the book, you’ll understand why.

What is one of your favorite elements in your debut novel? One of my favorite elements in Dive Smack is the springboard diving I used as both his skill and a metaphor to illustrate the main character’s life spiraling out of control. I have a friend [Karen LaFace] who was a U.S.A. springboard diver in the 1992 Summer Olympics in Barcelona, who was kind enough to proofread all the diving in my book. When she blurbed my debut novel and called it “…a perfect 10” I was ecstatic. When an olympic springboard diver says you nailed it, you kind of have a moment of stomach swooping pride. 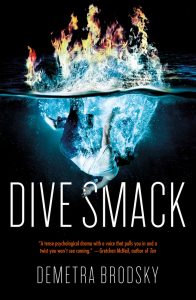 What led you to writing your first novel? I lost my job as an Artist Manager during the recession in 2009. At the same time, my youngest daughter was devouring the Percy Jackson novels. Being a first generation Greek American, I thought about how much I’ve always wanted to be an author, even though I was pushed by family as a teenager to do something they deemed more practical. I took the opportunity I had, for better or worse, to freelance and dive (pun acknowledge, not intended) into writing. I knew virtually nothing about writing a book. I had written poetry for years, though, so I set off for my local library and read as many books on the craft as I could carry, dedicated to changing my career and learning everything I could.

Once I had an outline and was drafting, I joined online groups and began attending conferences. I had started a now defunct blog and interviewed other authors to build my network, which branched into designing swag. That first novel got wonderful and constructive feedback from agents when I finally decided to query, but the timing for Greek Mythology had passed. I still intend to resurrect that book, which is the first in a planned goddess trilogy.

What are you working on now? At the moment, my projects are slightly under wraps, but I can say I have a YA thriller about alien abduction out on submission at the moment, and I’m also working with my editor at Tor Teen on a thriller proposal about siblings, and maybe the end of the world as we know it. I’d tell you more, but . . . you know how that saying goes. We’re thriller writers, after all. But please, stay tuned for things to come.

… is the author of historical romantic suspense, creating tales of love, crime,

and adventure in 19th century America.  As a child, Cari’s idea of fun Saturdays involved spending hours at the local library, researching historical tidbits and escaping into the endless worlds of fiction. She especially enjoys the suspense of thrillers/crime fiction, but is a sucker for being swept away by historical romance and the promise of true love. When she began writing, it became her goal to bring both genres together as one.

Originally from Southern California, Cari now resides with her husband in the beautiful state of Washington. She’s a member of International Thriller Writers and Romance Writers of America.

What is one of your favorite elements in your debut novel? I definitely have some favorite characters and favorite plot twists, but if I had to pick one favorite element it would be the various locations where the story is set. The reader is taken on an adventure with the characters from Gold Rush era San Francisco, through the jungles of the Isthmus of Panama, to antebellum New Orleans, with a brief stop in Acapulco along the way. 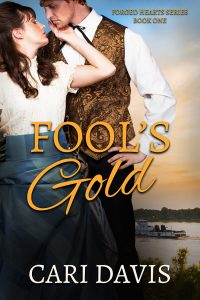 What led you to writing your first novel? I have had a lifelong love affair with mysteries, thrillers, and suspense novels, starting with Nancy Drew. As much as I enjoy reading them, though, my muse always wants to throw in a romantic element in the plots playing through my mind. When I decided to sit down and write my first novel, I thought it would be a romantic suspense in the same vein as Allison Brennan or Karen Rose. Yet, everything that I came up with seemed trite or woefully unoriginal. While struggling with the whole process, I took a break and read a historical romance (another genre I love). While reading the novel, I had an epiphany, realizing what I truly wanted to write. I set aside the horrible attempts at contemporary romantic suspense and wrote Fool’s Gold, a historical romantic suspense.

What are you working on now? I am working on rewrites for my second novel, TARNISHED COPPER.

… is also a television writer, he’s been nominated for a Writers Guild Award and has won an Emmy Award. His credits include Seinfeld, Ellen, The New Adventures of Old Christine, and Dirk Gently’s Holistic Detective Agency.

Matt Goldman’s novel, Gone to Dust, introduces private detective, Nils Shaprio. It will be be followed by Broken Ice, his second Nils Shapiro mystery in 2018. 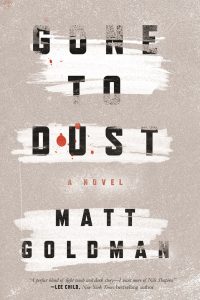 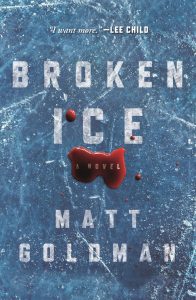 My favorite element in my debut novel, Gone to Dust, is my P.I., Nils Shapiro. He’s a modern man—complex, sensitive, and no tough guy. I have extensive experience in series creation from my TV work, and I’ve created a person who can live and grow for dozens of books.
What led you to writing your first novel? I’ve written television comedy for decades. I wanted to move into drama, so I started reading crime fiction for the first time. (I was a literary fiction snob before that.) I fell in love with the genre, and after a few years of reading it, decided to give it a try.
What are you working on now? When Forge acquired Gone to Dust, they asked for a second book in the series, which comes out June 12, 2018. When they read that, they asked for two more. I’m currently writing the fourth book in the series, and a stand-alone mystery set in 1922, and developing a television pitch.

on Amazon, Barnes & Noble, and Goodreads.

You can also request new books from your local library. Happy Reading! 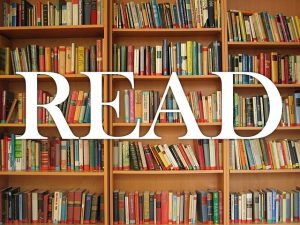