Domestic Thriller — The Mother Next Door 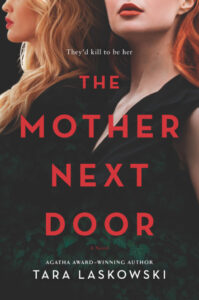 “If the women of Big Little Lies were the moms of East Coast high schoolers, they’d be right at home in The Mother Next Door—a witty, wicked thriller packed with hidden agendas, juicy secrets, and pitch-perfect satire of the suburban dream.”
—Andrea Bartz, author of The Lost Night and The Herd

The annual Halloween block party is the pinnacle of the year on idyllic suburban cul-de-sac Ivy Woods Drive. An influential group of neighborhood moms—known as the Ivy Five—plans the event for months.

Except the Ivy Five has been four for a long time.

When a new mother moves to town, eager to fit in, the moms see it as an opportunity to make the group whole again. This year’s block party should be the best yet… until the women start receiving anonymous messages threatening to expose the quiet neighborhood’s dark past—and the lengths they’ve gone to hide it.

As secrets seep out and the threats intensify, the Ivy Five must sort the loyal from the disloyal, the good from the bad. They’ll do anything to protect their families. But when a twisted plot is revealed, with dangerous consequences, their steady foundation begins to crumble, leaving only one certainty: after this year’s block party, Ivy Woods Drive will never be the same.

From award-winning author Tara Laskowski, The Mother Next Door is an atmospheric novel of domestic suspense in which the strive for perfection ends in murder…

Domestic Thriller is a subgenre of suspense and crime fiction that focuses on the psychology of personal relationships.

The Mother Next Door has been called the “pitch-perfect satire of the suburban dream.” What drew you to that particular community to set your second novel of suspense?

I’ve always found the suburbs a little creepy. This idea that you can have this perfect life, that there is such a thing as a perfect sleepy street where all the families are happy. It seemed like a great setting for a story about friendship, about lies, about wanting more and doing anything to get it. I wanted to expose the underbelly of the façade of the American dream, I guess.

Tell us about Ivy Woods Drive, the location of The Mother Next Door:

Here are two passages from the book that I think show the contrasting views of the street:

“I’d always been in love with this neighborhood—Ivy Woods—and my love had continued to grow since our family had moved here from Philadelphia three weeks ago. Our cul-de-sac ran up against a small lake that separated our homes from a town house community across the way. And even though we were only a dozen miles from DC, the woods around the neighborhood made us feel like we were in a secluded forest retreat, private and protected.

It felt so easy, so normal. The kind of place you saw on a dated sitcom, with large and wholesome families and golden retrievers and everyone learning important lessons. The kind of street that made you wonder how different your life would be if only you lived somewhere like that.

Look closer. Look under the makeup and the masks, look into the windows of the perfect houses. Dig under the surface of those freshly mowed lawns, and you’ll find the worms. I’ve looked—believe me, I’ve looked. There’s something about this street. There are secrets. I know from watching through the windows, from hearing the hushed conversations, from lingering on their faces when they think everyone else has looked away.”

The plotting for The Mother Next Door is impeccable. How did you work out all the twists and turns? Are you an outliner? Or do you work organically and find your way through the story on the page?

Thanks for saying that! It was an absolute nightmare to write this book, so I appreciate that compliment.

I think in this case, I had an idea of the backstory and what might happen at the end to bring all the threads together, but I also fumbled through a lot of it, figuring it out as I wrote. I think I’ve discovered I work best as a plantser—plotting a bit of the story, writing it, and then figuring out the next steps.

But every book is different!

Part of why I found the characters so compelling is they have very clear wants. All their goals are quite strong. How much did you know about the characters when you sat down to write? Did they evolve a lot during your rewriting? Or did they spring forth well-formed from the very beginning?

Usually I think character comes first for me. Character and setting. But in this case, I had to write a lot of the book before I felt like I really knew the characters and their motivations. It was hard because they are a group of suburban moms, all living on the same street, and so keeping them distinct but also interesting was a challenge.

I like writing about a bigger cast of characters, but I always get mad at myself halfway through the draft because it’s so hard to write a bunch of different people and have them all feel real.

Your first novel, One Night Gone, also relies on the history of a place and the people there. What is it about that situation that intrigues you?

I think it’s a total theme for me! To me, the place my books are set is almost more important than the storyline, at least when I’m starting out. If I can get excited about the setting and really “see” it and its possibilities (mostly possibilities for being creepy), then I can totally move people around in that place and make things happen.

Places have such energy, and they evolve and change based on the mark left by the people in them. I really enjoy that idea, of how the past influences the present, and how you can never really get away from it.

My third novel is just evolving now, but I think it’s going to be another suspense novel about the history of a place and something dark that happened there that the people who were affected by it now have to face. And they probably won’t all survive, sadly.

Find your voice. Be humble. Hope for the best, but never expect it. Find the fun in writing whenever possible. Don’t quit your day job.

Excellent advice! Thank you for visiting with us! A good domestic thriller is one of my favorite reads.

My Thoughts On the Domestic Thriller The Mother Next Door

Theresa Pressley wants nothing more than to fit in with the women in her new neighborhood — the externally perfect Ivy Woods. “I’d been studying—their habits, their style. Figuring out how they operated, so that when the time was right, I would fit in.”

They are so perfect, the other mothers. “They were chatting animatedly, one woman’s words tripping over the last’s. Beautiful creatures, at ease in their lives and their homes.”

All Theresa wants is to become a part of that world.

Beginning with a seven-week countdown to Halloween, it’s not long before Theresa is brought into the fold by the Queen Bee, Kendra McCaul. Kendra even presents Theresa with a pin, marking her as one of their own: The Ivy Five.

Now Theresa can be perfect too. But is that really something to strive for? As with all good domestic thrillers, the shiny, pretty outside world doesn’t match the darkness underneath. And Theresa soon finds herself embroiled in the complex past of the group.

Told in multiple perspectives, Theresa, Kendra, and an unnamed third, Laskowski skillfully navigates the challenge of making each point-of-view character equally compelling. Further, all the characters, despite their outward veneer of similarity, have their own distinct personalities, a challenge in a large cast novel.

Determinedly over-the-top, The Mother Next Door succeeds in delivering the chills of the season, the delicious catty backstabbing only a group of coiffed women can bring, and enough plot twists and reveals to keep the reader turning pages. Atmospheric and dark, Tara Laskowski has penned another terrific novel of suspense. I’ll be waiting on pins and needles for book three. 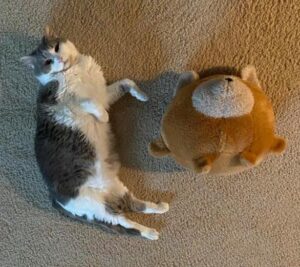 Izzy is a cranky old lady cat who wants none of your nonsense.

She enjoys eating and sleeping and half-heartedly tossing around old hair ties. 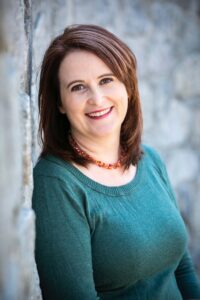 TARA LASKOWSKI’s debut suspense novel One Night Gone won the Agatha Award, Macavity Award, and the Anthony Award and was a finalist for the Lefty, the Simon and Schuster Mary Higgins Clark, the Strand Critics, and the Library of VA Literary awards.

She has also written two short story collections, Modern Manners for Your Inner Demons and Bystanders. She has had stories published in numerous magazines and anthologies such as Mid-American Review, Barcelona Review, and the Norton anthologies Flash Fiction International and New Micro: Exceptionally Short Fiction, among others.

Tara was the winner of the 2010 Santa Fe Writers Project’s Literary Awards Prize, was the longtime editor of the popular online flash fiction journal SmokeLong Quarterly, and is a member of Sisters in Crime, Mystery Writers of America, and International Thriller Writers.

She and her husband, writer Art Taylor, write the column Long Story Short at the Washington Independent Review of Books. She earned a BA in English with a minor in writing from Susquehanna University and an MFA in creative writing from George Mason University. She grew up in Pennsylvania and lives in Virginia.