Damascus Station — the debut novel by David McCloskey, based in part on firsthand knowledge of the Syrian war. 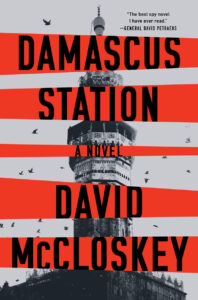 “Damascus Station is the best spy novel I have ever read.” —General David Petraeus, former director of the CIA

A CIA officer and his recruit arrive in war-ravaged Damascus to hunt for a killer in this page-turner that offers the “most authentic depiction of modern-day tradecraft in print.” (Navy SEAL sniper and New York Times bestselling author Jack Carr).

CIA case officer Sam Joseph is dispatched to Paris to recruit Syrian Palace official Mariam Haddad. The two fall into a forbidden relationship, which supercharges Haddad’s recruitment and creates unspeakable danger when they enter Damascus to find the man responsible for the disappearance of an American spy.

But the cat and mouse chase for the killer soon leads to a trail of high-profile assassinations and the discovery of a dark secret at the heart of the Syrian regime, bringing the pair under the all-seeing eyes of Assad’s spy catcher, Ali Hassan, and his brother Rustum, the head of the feared Republican Guard. Set against the backdrop of a Syria pulsing with fear and rebellion, Damascus Station is a gripping thriller that offers a textured portrayal of espionage, love, loyalty, and betrayal in one of the most difficult CIA assignments on the planet.

To purchase Damascus Station, click on either of the following links: Amazon & IndieBound

“The complex and brutal war in Syria was fertile ground for this exploration.”

Damascus Station is your first thriller. Out of all the spy stories you could tell, what drew you to this specific series of events? What intrigues you about Syria?

I worked on the Middle East for many years while at the CIA and watched the Syrian war closely, so there was a familiarity that attracted me.

When I left the Agency, I was also struggling to process the tragedy and hopelessness of that conflict, so I started writing about it. As I got deeper into the project, I realized the setting provided both an opportunity to reveal an authentic side to the CIA and to craft characters – many of them Syrian – who would demonstrate something true about war, love, power, and loyalty.

The complex and brutal war in Syria was fertile ground for this exploration.

As a former CIA analyst, you have insider knowledge about how that organization works, realism that you wove into Damascus Station. Was there anything you wrote that you later had to remove because it would get you into hot water? Or things you would have liked to include but couldn’t?

The CIA’s Publication Review Board is professional, efficient, and helpful. I submitted a few versions of the manuscript and each time they responded quickly and with a clear point of view. They had a few small issues with the book – by the way, when they make edits, they run over your manuscript with a black highlighter – which were logical to me and relatively simple to address. I think they had only minor issues in part because I knew what kind of information would be fine to publish and what might threaten sources and methods.

Since I knew the rough boundary, it was fairly easy to determine what I could and could not include.

A black highlighter! That’s crazy. I should try that when I edit – ha ha ha

What drew you to a career in international dynamics, counterterrorism, and the Middle East?

I was an International Relations major in undergrad, and was drawn to studying how the world really worked. I was lucky that an alum of my college happened to be running the CIA’s Middle East analytic shop at the time. He came on campus to conduct a few interviews, and the rest is history.

Tell us about the road to publication for Damascus Station:

My wife knew an agent through a colleague at her old think tank in DC. So, I had a contact in the industry which was incredibly fortunate.

I told him I was working on a spy novel, and he was kind enough to counsel me on the plot and offered to read it along the way. We had just submitted the book to publishers in February 2020 which, it turns out, was a bad time. COVID hit, and for several months we heard crickets. Then, out of the blue, Star Lawrence at Norton called. He said he liked the story but had a few things he wanted to work on.

Most of the problems were Writing 101 mistakes I made because I’ve never taken a class on writing. Star helped me improve the prose and the story and we worked together over the summer on the manuscript.

When the process was done, he bought the book.

How do you balance work, writing, and family life?

I’m fortunate in that I’m now writing full time. But until very recently that wasn’t the case – I was juggling a job in management consulting, three kids, and writing the novel.  I would not use the word ‘balanced’ to describe that mixture!

I’m currently working on another spy novel centered on the next stage of the US-Russia spy war. The book explores the question of what it might look like if the CIA got very serious about making life hard for Vladimir Putin.

Get the first draft done. Just finish the draft. It’s very hard to see the full arc of the story and to truly know your characters before you clear the first draft.

Terrific advice, and fascinating interview. Looking forward to having you back on with book two!

He worked in CIA field stations across the Middle East throughout the Arab Spring and conducted a rotation in the Counterterrorism Center focused on the jihad in Syria and Iraq. During his time at McKinsey, David advised national security, aerospace, and transportation clients on a range of strategic and operational issues.

David holds an M.A. from the Johns Hopkins School for Advanced International Studies, where he specialized in energy policy and the Middle East. He lives in Texas with his wife and three children.