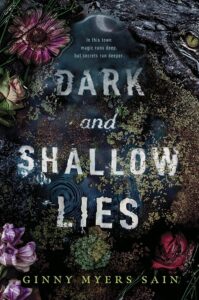 A teen girl disappears from her small town deep in the bayou, where magic festers beneath the surface of the swamp like water rot, in this chilling debut supernatural thriller for fans of Natasha Preston, Karen McManus, and Rory Power.
La Cachette, Louisiana, is the worst place to be if you have something to hide.This tiny town, where seventeen-year-old Grey spends her summers, is the self-proclaimed Psychic Capital of the World—and the place where Elora Pellerin, Grey’s best friend, disappeared six months earlier.

Grey can’t believe that Elora vanished into thin air any more than she can believe that nobody in a town full of psychics knows what happened. But as she digs into the night that Elora went missing, she begins to realize that everybody in town is hiding something—her grandmother Honey; her childhood crush Hart; and even her late mother, whose secrets continue to call to Grey from beyond the grave.

When a mysterious stranger emerges from the bayou—a stormy-eyed boy with links to Elora and the town’s bloody history—Grey realizes that La Cachette’s past is far more present and dangerous than she’d ever understood. Suddenly, she doesn’t know who she can trust. In a town where secrets lurk just below the surface, and where a murderer is on the loose, nobody can be presumed innocent—and La Cachette’s dark and shallow lies may just rip the town apart.

Tell us about your road to publication with Dark and Shallow Lies:

I come from a family of writers. My mother has 20 traditionally published novels, mostly middle grade historical fiction, and my father was a poet and non-fiction writer. Even my brother is a past Poet Laureate for the state of Oklahoma! So writing is in my DNA.

I actually didn’t start out as a writer, though. The theatre has always been my true love. My degree is in theatre and I’ve spent my whole adult life, up until now, working in the theatre. I only started writing when I moved back to Oklahoma. I needed some new direction, and my mother convinced me to become involved in SCBWI.

Originally, I was just looking to meet some cool people and learn a little bit, but I’ve been seriously working toward publication for about five years now.

I did write two novels before this one, and although I got a lot of good feedback and lots of full requests for those manuscripts, they just weren’t quite ready. Once I wrote Dark and Shallow Lies, though, things went pretty fast. I finished the first draft in about four months, and it was only another couple of months before I got an offer of rep from an agent.

I had the full out with several agents by that point, so I let them all know I had an offer, and I was lucky enough to end up with several offers. I was able to pick an agent I’d always wanted to work with, and the rest happened really fast. I signed with my agent, Pete Knapp at Park & Fine,  in July.

We did one quick round of minor revisions, went out on sub, and sold the book at auction a week later. That was fall of 2020, so when it comes out in August 2021, it will have been about ten months from auction to release. So very fast! It’s been kind of a whirlwind, in the most awesome way.

Describe La Cachette, Louisiana, the location of the novel:

La Cachette, Louisiana, is the self-proclaimed “Psychic Capital of the World.” It’s a town that’s deep in the bayous of southern Louisiana, accessible only by boat.

La Cachette itself is not a real place, of course, but the town was very loosely inspired by two actual places. The first is the tiny town of Cassadaga, Florida, which I was lucky enough to stumble upon  during a road trip across the sunshine state. Cassadaga really does bill itself as the “Psychic Capital of the World” and its home to palm readers, tarot card readers, astrologists, and mystics of all kinds. However, Cassadaga was a bit too accessible for what I had in mind.

I needed a place that was more cut-off from the world. Somewhere a little harder to get to…and to escape from. I had spent a lot of time in Louisiana over the years and had fallen so deeply in love with the swampy landscapes, the culture, and the people, and my mind went back to a little place called Pilottstown, which served for years as a home to riverboat pilots on the Mississippi River, so that became the inspiration for the geographical location.

Young Adult books usually have a protagonist between the ages of 13 and 18, and focus on situations important to teens.

What draws you to writing Young Adult (YA):

I taught and directed theatre with high school students for years, and I just loved working with that age group. They are so funny and fierce and loyal and brave. And it’s such a time of change. Everyone is becoming someone new, and they are all feeling their way through that process. It’s a kind of metamorphosis.

You always feel like you’re right on the cusp of something that will either be a wonderful adventure or an absolute disaster. It’s just a time when anything can happen. And the stakes are huge!

Supernatural Mystery: having the conventions of a mystery, but with events that transcend our natural world.

Everyone in the town of La Cachette has some kind of psychic ability, so we have psychic empaths, psychic artists, a girl who is clairaudient, clairvoyants, a little girl who’s a physic healer, a boy who has the power of bilocation. It’s just this mix of very ordinary people with very extraordinary gifts.

You have a background in theater. How has theater been a part of your life? How does it impact your storytelling?

I think the main thing is that I see the scenes in my head very visually as I write them. I’m always very aware of what a scene would look like on stage. Where would the set pieces be? What would the actors be doing with their bodies? How are they relating to each other physically? What would the lighting look like? Then I try to write it the way I would direct it.

I had a two-book contract, so I’m working on book two, which should be out in the fall of 2022. I can’t say a lot about it, but it is also a YA mystery/thriller with some magical/paranormal elements. Think waves, lighthouses, salt in the air.

It’s actually set in the world of the theatre, so I’m excited to bring my love of theatre and my love of writing together for this project!

Don’t be afraid to screw things up.

By that I mean, don’t be afraid to experiment, try new things, stretch outside of your comfort zone, and do the things that scare you. If it’s ends in disaster….so what? At least you tried something new.

That’s always been hard for me, because I’m kind of a perfectionist. I like to get things right the first time, But, when it comes to art, that really holds you back. It means you never create anything that truly challenges you. 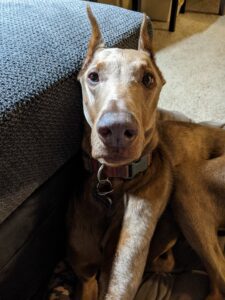 I have one pet, a nine-year-old Doberman named Shipley.

She was named after my son’s favorite donut shop.

Shipley is afraid of everything.

Her list of phobias includes (but is not limited to): slippery floors, strange water dishes, roosters, TV trays, the Chihuahua down the street. 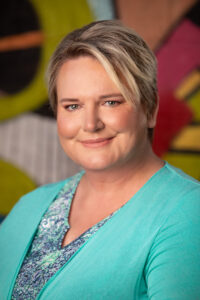 Ginny Myers Sain is the author of DARK AND SHALLOW LIES, her debut YA novel available 8-31-21 from Razorbill/Penguin.

Although she comes from a long line of writers, her first love has always been the theatre. She has a degree in theatre and has spent most of her career teaching acting and directing plays and musicals. ​

When she is not working in the theatre or writing, you’re likely to find her listening to true crime podcasts, taking pictures of alligators, eating tacos, or planning a trip to Walt Disney World.