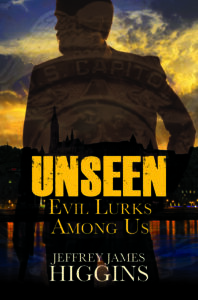 “This high-stakes political thriller pulses with suspense, as two men navigate a series of killings in and around Washington D.C.” –Independent Book Review

Rookie Homicide Detective Malachi Wolf investigates a string of murders in Washington, DC and uncovers both a vigilante killer and a terrorist conspiracy-making himself a target.

After his father’s murder, Malachi abandoned his economics doctorate to become a police officer and protect the innocent. Now, he must solve his first homicide to prove himself worthy of the badge. Austin grew up in a strict religious home, with an abusive father who taught him to solve problems with violence, so when an Islamist infiltrator murders Austin’s girlfriend, he seeks revenge the only way he knows how.

The body count grows as Malachi hunts the brutal assassin and unearths a sinister scheme that threatens the country. The former academic seeking justice and a vigilante set on revenge travel on a collision course-two men fighting evil by different means. Can Malachi stop the murders and expose the plot before the streets run with blood?

To purchase Unseen, click on any of the following links: Amazon, Barnes & Noble & IndieBound

Tell us about the protagonist for Unseen: Evil Lurks Among Us, Malachi Wolf.

Shortly after becoming a detective, Malachi stumbles on a murder in Washington, DC. He investigates with his mentor, a seasoned DC cop, and as the body count grows, Malachi discovers a conspiracy that threatens the country.

He needs to solve the crimes to prove himself worthy of carrying a badge and find justice for his murdered father. As a former economist, Malachi uses logic, reason, and economic theories to piece together clues. Malachi works with Dr. Zahra Mansoor, a brilliant and beautiful fellow at a think tank, and his interest reaches beyond her research.

Malachi is torn about his decision to leave economics and become a police officer, and he has a serious disease that limits the time he can be a cop. He longs to be with his daughters, and his divorce hampers his romantic relationships.

He’s also Jewish, which is unusual for protagonists in crime thrillers. Kirkus Reviews called the characters in Unseen “surprising.”

Your first Thriller, Furious: Sailing into Terror, was set on the Indian Ocean, Unseen: Evil Lurks Among Us is set in Washington D.C. Those are two very different locations. How did the move to an iconic and urban setting impact your descriptions and the role that place has in your latest work?

Great question. The settings in both books affect the stories and are as important as the characters. Almost the entire story in Furious takes place on a yacht in the middle of the Indian ocean.

The sea is a source of conflict and impacts the characters and action. I set Unseen in and around the historic Georgetown neighborhood in Washington, DC. Action takes place in iconic buildings, and the backdrop adds to the suspenseful atmosphere.  The setting is also important to the underlying conspiracy. Several important scenes take place on the Potomac River, and I realized my love of the water has influenced both books.

Political Thriller: A thriller set against the backdrop of a political power struggle

Your protagonists are both impacted by intense personal tragedies that upend their lives and sets them on new journeys for the course of the book. How does the personal and the public interact for Malachi Wolf?

Malachi Wolf followed in his father’s footsteps and pursued a doctorate in economics until his father was killed in the Boston Marathon bombing. That event changed Malachi’s life.

He dropped out of school and became a police officer to find some measure of justice in the world. His radical career change forced his wife to take their two daughters to leave him. Malachi is driven to solve murders to resolve his internal conflict.

Tell us about Blood and Power.

In 2017, I retired as a supervisory special agent after twenty years with DEA. I believe in legalizing most drugs, so I spent my career hunting narco-terrorists and violent transnational criminals.

Special Agent Jeffrey Higgins swore he would avenge the dead. That oath, made standing in the smoldering rubble of the World Trade Center, propelled him around the world on a quest to prove the nexus between terrorism and drug trafficking and maneuver DEA into the war.

Defying skeptics, he attained the first narco-terrorism conviction and exposed the secret cabal of jihadists and traffickers who murder innocents and fuel the world’s heroin epidemic. This historic investigation demonstrated the effectiveness of law enforcement techniques in combating terrorism and created a template for bringing terrorists to justice.

You have led a very exciting and often dangerous career. How does launching a book compare to catching narco-terrorists and fighting the Taliban in combat?

I’m not sure if it’s more difficult to hunt terrorists or to get a manuscript published. I’m passionate about writing, but the publishing business is brutal. I spend at least half my time studying the craft and business of writing.

Most readers don’t understand how much marketing and sales have become the author’s responsibility. Unseen is my second published novel this year, which means I’ve been asking for blurbs and reviews, designing social-media ads, preparing for in-person and virtual launches, giving interviews, creating ad copy, and trying to get word to my readers.

I’ve wrestled a suicide bomber and been shot at with AK-47s, RPGs, and rockets—which is obviously more dangerous—but subjecting my writing to public criticism can also be scary. When readers tell me they loved my book, it’s all worth it.

My second novel launched on August 26, so I’ve been busy seeking blurbs from other authors and terrorism experts, asking for reviews, writing guest blogs, speaking on panels, and marketing the book on social media and other websites.

Everyone who has gone through a launch understands there’s so much involved to make readers aware of your book—especially for a relatively new writer. Once most people read my books, they’re hooked, but getting them to try a new author is a challenge.

I’m working with my agent to find a publisher for Blood and Powder. My agent has also submitted Shaking, a small-town murder mystery novel. I set Shaking in my hometown of Harvard, Massachusetts, and I was excited to write about the little New England town where I grew up.

Battling bipolar disorder, Emily Miller lands her dream job as a reporter and returns to her New England hometown, but when her brother becomes a suspect in a gruesome murder, she must identify the killer to save her family, her job, and her life. It’s Sharp Objects meets The Truth About the Harry Quebert Affair.

I recently self-published my first serial story, Forsaken, on Kindle Vella, Amazon’s new serial platform. Presumed dead and abandoned in Afghanistan, Army Medic Samantha North must evade a ruthless Taliban commander and fight for her life. Samantha joined the Army to become a medic, but when the US military withdraws from Afghanistan, she is listed as Killed in Action and left behind. Now, she must transform from healer to war fighter to evade capture and find her way home. Lost, hunted, and forgotten—can she survive?

I’ve posted most of it, and I’m trying to finish the final episodes. Serials have a different structure than novels, because each episode must have its own arc, much like a television show in a series. Most of my thriller chapters start with hooks and end with cliffhangers, so writing a serial has not been too difficult.

I’m also editing my new techno thriller, The Forever Game. Adam Locke quits DEA to care for his dying wife and takes a job as a security consultant at his brother’s tech start-up. When his brother is murdered, Adam hunts the killer and discovers life-saving artificial intelligence can also be deadly. It’s “Man on Fire” meets “Altered Carbon.”

Words of Wisdom for Aspiring Writers.

My favorite writing advice is to write your first draft with abandon and allow your imagination to carry you through to the end. Tell yourself nobody will read it until it is ready and let it flow until you have a completed draft.  Some brilliant author said, “you can’t edit a blank page.” You will have plenty of time to edit character arcs and your plot. First drafts are all about creation.

I’m an outliner, but I find it difficult to get my plot on paper if I don’t write the first draft straight through. Some people edit every day before they begin, and that’s fine if they write new material every day. I shoot for at least 2,000 words per day when I’m writing a first draft. Writing daily helps me maintain the voices of my characters and keeps my subconscious working on plot problems while I’m away from my computer. 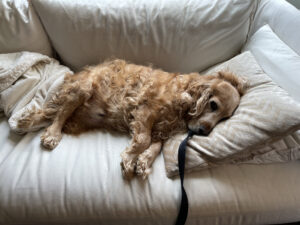 I grew up with Treasure, the golden retriever my parents gave me on my fifth birthday. She was my best friend.

As an adult, I had Sophie, a 30-pound cocker spaniel, and Spenser, a 120-pound Rottweiler. They made quite a pair. I named characters after all three of them in my debut novel, Furious: Sailing into Terror.

Five years ago, my mother-in-law and her dog moved in with my wife and me. Slinky is an eleven-year-old cocker spaniel who understands English and Arabic. He’s high strung, but affectionate. I love having a dog in our home. 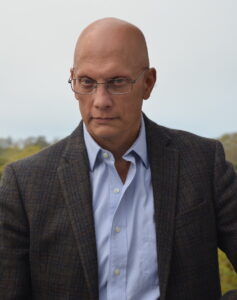 Jeffrey James Higgins is a former reporter and retired supervisory special agent who writes thriller novels, short stories, creative nonfiction, and essays. He has wrestled a suicide bomber, fought the Taliban in combat, and chased terrorists across five continents.

During his career, he made the first narco-terrorism arrest, convicted the world’s most prolific heroin trafficker, and arrested an Iranian operative trying to acquire surface-to-air missiles. Jeffrey received both the Attorney General’s Award for Exceptional Heroism and the DEA Award of Valor.

Jeffrey has been interviewed by CNN Newsroom, Investigation Discovery, CNN Declassified, New York Times, and Fox News. He was a finalist Adelaide’s 2018 Best Essay Contest and a quarterfinalist in ScreenCraft’s 2019 Most Cinematic Book Competition and 2021 Cinematic Short Story Writing Competition. His nonfiction is represented by Linda Langton, Langtons International Agency.