Regency widow and amateur sleuth Lily Adler returns with Silence in the Library by Katharine Schellman.

Silence in the Library 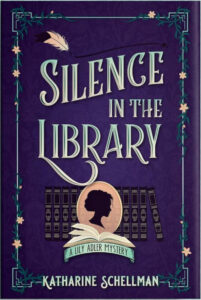 Regency widow Lily Adler didn’t expect to find a corpse when visiting a family friend. Now it’s up to her to discover the killer in the charming second installment in the Lily Adler mysteries.

Regency widow Lily Adler has finally settled into her new London life when her semi-estranged father arrives unexpectedly, intending to stay with her while he recovers from an illness. Hounded by his disapproval, Lily is drawn into spending time with Lady Wyatt, the new wife of an old family friend. Lily barely knows Lady Wyatt. But she and her husband, Sir Charles, seem as happy as any newly married couple until the morning Lily arrives to find the house in an uproar and Sir Charles dead.

All signs indicate that he tripped and struck his head late at night. But when Bow Street constable Simon Page is called to the scene, he suspects foul play. And it isn’t long before Lily stumbles on evidence that Sir Charles was, indeed, murdered.

Mr. Page was there when Lily caught her first murderer, and he trusts her insight into the world of London’s upper class. With the help of Captain Jack Hartley, they piece together the reasons that Sir Charles’s family might have wanted him dead. But anyone who might have profited from the old man’s death seems to have an alibi… until Lily receives a mysterious summons to speak with one of the Wyatts’ maids, only to find the young woman dead when she arrives.

Mr. Page believes the surviving family members are hiding the key to the death of both Sir Charles and the maid. To uncover the truth, Lily must convince the father who doesn’t trust or respect her to help catch his friend’s killer before anyone else in the Wyatt household dies.

To purchase Silence in the Library, click on any of the following links: Amazon | Barnes & Noble | BookShop | Goodreads

Tell us about Lily Adler:

Lily is a young widow who has recently set out to rebuild her life after the loss of her husband.

When I first started writing about Lily, I thought the story was going to be more of a romance. But I quickly discovered that she was a character who wasn’t ready to fall in love again — who, in fact, wasn’t sure she would ever fall in love again. For a while I had a character I adored wandering around in search of a plot.

Luckily, Lily is also intelligent, observant, reserved, determined, and has an unnerving habit of stumbling on dead bodies. So it didn’t take me long to realize I was writing a mystery instead of a romance!

The Regency Period officially spans the years when George Augustus Frederick, the Prince of Wales, acted as the regent for his ill father, King George III.

What drew you to setting this series in the Regency era? And how do you go about your research?

I’m a big fan of both Agatha Christie and Jane Austen, so I liked the idea of seeing what would happen if those two worlds collided. I also thought I knew everything I needed to know about the Regency, which was supposed to make the historical setting simple to write.

I quickly discovered that what I knew barely scratched the surface of the Regency, which had some dark and tumultuous undercurrents running just below its elegant surface! Luckily, I love the research side of things. I’ll look at everything from historical maps to fashion plates to personal letters to get a sense for the world and the people in it.

Less than 30% of that research makes it into the final novel, but it’s all good background for me as a writer. Plus, you never know when you’ll stumble on some unbelievable-but-true tidbit that sets off the next story!

Silence in the Library is the second book in your series, but it can be read as a standalone. How do you balance providing too much backstory with filling in new readers for a later book in a series?

By having a very skilled editor. 😉

I’m always worried about providing too much detail about what happened in previous books — tedious for folks who read the first one and frustrating for new readers who might still want to pick up the first one without the end being spoiled!

My editor has helped me find what feels like a good balance between filling in any blanks for new readers without giving away too much or slowing down the second book. But it’ll be up to readers to decide whether that balance was a success or not!

Called “The Prince Regent” during his tenure, he becomes King George IV in 1820

Lily is still very much herself in book two, with her found family around her and helping her to build a new life for herself. The biggest change in this book is the sudden appearance of her father, who doesn’t approve of his daughter and definitely doesn’t approve of her solving mysteries. It’s a new challenge for her to tackle and a peek into what shaped her as a person for readers who met her in book one.

The nice thing about mysteries is that you’re pretty much guaranteed the plot of each will be wrapped up by the end, which makes them really tidy reads on their own. But I knew there were certain character arcs that I wanted to continue, and I had my fingers crossed for a book two where I could explore them.

Prior to becoming a published novelist, you were a dancer and performer. How did those art forms inform your writing?

My dance background made me a very physical performer, so I would always use movement and posture as a way to understand and define the characters I was playing onstage or on screen. That habit has carried over to my writing, and I tend to describe how characters move a lot as a way of expressing their moods and personalities.

Sometimes this works really well, and sometimes I overdo it. My agent and editor have more than once pointed out that I tend to give characters a particular physical habit and then mention them doing it way too much!

I’m in the middle of writing the third Lily Adler Mystery! It’s a whodunit with a bit of a gothic vibe, which is perfect since it’s due out in Fall 2022.

I also just wrapped up edits for a new book that will be coming out in June of 2022. Last Call at the Nightingale is the start of a series of mysteries set in 1920s New York City.

It’s a very different setting and vibe than the Lily Adler books, and going back and forth between them has been so much fun.

Everyone writes terrible books before they write good ones. Even published writers — my first drafts are always a mess. Writing, like any other art, requires practice. And editing makes everything better.

Katharine Schellman is a former actor, one-time political consultant, and currently the author of the Lily Adler Mysteries.

A graduate of the College of William & Mary, Katharine currently lives and writes in the mountains of Virginia in the company of her family and the many houseplants she keeps accidentally murdering.

Visit all the Stops Along the Partners In Crime Book Tour! 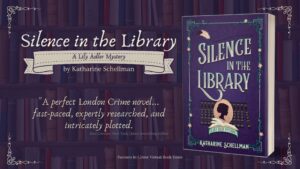