Unlikeable Characters and a Riveting Plot

Unlikeable characters are tough to do well, but Kate Myles creates a dynamic domestic thriller with the kind of people you love to hate.

The Receptionist by Kate Myles 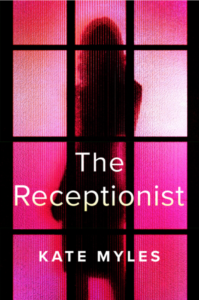 “Unlikeable characters? Check. Twisty plot? Check. This book has a pervasive sense of dread throughout, which made me turn the pages even faster. I couldn’t wait to see how it ended.” ―Samantha Downing, USA Today bestselling author of My Lovely Wife and He Started It

In this domestic thriller, sex, ambitions, and disaster burn more intensely than the Los Angeles sun.

Emily is a top talent agent who rules the land of talk shows and reality TV. Whip-smart and brutally practical, she outmaneuvers all rivals…except in her personal life.

Emily willfully ignores her CEO husband Doug’s philandering in exchange for their glamorous one-percenter lifestyle, until a surprise pregnancy changes everything.

A TED-Talking business guru with a reckless streak, Doug embarks on an audacious relationship with Chloe, the stunning young receptionist at his market research firm.

But Chloe has a secret: a volatile past she’s desperate to forget. Their chaotic entanglement sets off a chain of shocking scandals, plunging Emily into a scheming fight for survival.

As they each try to fight their way to the top, there’s only one question: How far will Emily go to protect her child and preserve her carefully curated life?

To purchase The Receptionist, click the following link: Amazon

My Thoughts on The Receptionist and Unlikeable Characters

I found The Receptionist a fascinating read. Like watching a car derailing a train before they both fall off a bridge onto the traffic below. The main characters in Myles’ debut novel treat each other horribly. But that’s part of what kept me turning pages.

Emily and Doug are married. Doug and Chloe have an affair. Chloe is a psychopath. It’s a combustable combination and no one is above reproach in Myles’ investigation of what lengths people will go to preserve their careers, their reputations, and their financial status.

A tough-minded, take-no-prisoners talent agent, Emily has worked hard to get where she is. She forged a life as a top predator in the Los Angeles film industry. It’s not pretty, but it’s shiny. It’s not secure, but it’s something others admire.

Doug is a charismatic CEO with a ruthless side to his ambition. He’s also a cheater and a liar, but Emily is willing to look the other way . . . for a time.

Chloe is a struggling artist. Gorgeous and seductive, but she’s also in over her head trying to fit into the Hollywood scene. Or is she the worst of the trio? Willing to do anything to succeed? But then, isn’t that what’s been modeled for her?

Myles background in the entertainment industry lends an air of credibility to her tale, but regardless, that’s not why we read books like The Receptionist. We’re reading because of the intense drives of the characters. Everyone wants something and wants it badly, we just want to see how far they will go.

Not for the faint of heart, The Receptionist is a total guilty pleasure. Grab yourself a drink and hold on for the ride.

Tell us about your road to publishing The Receptionist:

It was a long one! It took about five years to finish the first draft. I started writing seriously during my maternity leave in 2012. I wrote during my son’s nap time during his infancy and then between television producing jobs after I went back to work. I would have to put the whole project down for months at a time when I had a producing gig. I found it impossible to be effective at work, raise my son, and work on the book all at the same time. Luckily I often had time between jobs when I was able to write.

I always came back to the project.

I found my agent, Noah Ballard, through querying. I actually nudged him after a few weeks of not hearing back and caught him at just the right time. He asked for the full and then emailed me an hour after I sent it, asking if other agents had the MS. We signed the next day.

It took about a year after that to hammer the book into something sellable. When we finally went wide with submissions, Liz Pearsons, my editor at Thomas & Mercer was wonderfully enthusiastic. She especially liked the cross-genre feel of it. I’d been hoping someone would respond to that. I have to say, it feels pretty good to feel supported.

Unlikeable Characters are people we root for despite their bad actions. Why do we do it? They likely have clear goals and make interesting choices.

The primary characters are incredibly cruel to each other, which is both mesmerizing and ghastly—making for a book I couldn’t put down. What drew you to writing Emily, Doug, and Chloe?

I don’t think the characters are intentionally cruel, at least not in the beginning of the book. Emily and Doug aren’t sadists. They’re users. The cruelty is a by-product of their ambition and self-absorption. With Doug especially, I try not to let him see the damage he does. In his mind, he’s happy-go-lucky and leads a charmed life. Most of the consequences play out in Emily’s and Chloe’s chapters.

I wanted to write a story about predation. Originally I’d intended sort of an ironic fairytale, wondering what would happen if you plopped someone like Cinderella or Sleeping Beauty down in 21st century Los Angeles. I figured she’d be a magnet for all these Fairy Godmothers and Princes Charming, all way too good to be true.

As I worked on it, I started paying attention to this ancillary character, the wronged wife of Prince Charming. I’d initially painted this woman as somehow noble in her suffering, with shades of Anne Archer in Fatal Attraction. But then I realized she was probably just as cynical as her husband. The book took off from there, switching the focus from the victim to the perpetrators.

Unlikeable Characters are the heroes in their own stories, not necessarily aware of their own flaws. Just like the rest of us!

How did your real-world experience in television impact the fictional world that Emily, a top talent agent, and Chloe, an aspiring actor, live in?

I had so much fun writing the entertainment industry scenes! First, I want to stress that the vast majority of people in TV are down-to-earth and hard working. But at the same time you have these outsize personalities, people who’ve professionalized their natural charisma. It’s fairly unique to entertainment and is always ripe for parody. I’m not the first to write about it, but I did try to come up with a fresh take.

In the first chapter with Emily and Chloe, there are a couple of things happening. There’s the personal element: a wife feeling out a potential threat to her marriage. The professional: Seasoned pro vs. naif. But it’s also a dialogue about art.

Emily is all about the elevator pitch – simplicity, making things “easy to understand,” while Chloe approaches her art like a mining operation – aiming for immediacy, almost a break from the bounds of narrative. These are two extremes that any creative person has to consider in their work. Balancing idealism and pragmatism. Staying true to a personal vision while also conceding to the requirements of the marketplace.

There’s a giant Calder sculpture in the lobby of the Emily’s agency, which is a nod to this Lichtenstein mural that dominated the lobby of the old CAA building. Chloe sees the sculpture as alternately comforting, something that “started as an idea in someone’s head,” and nausea-inducing, a flexing of money and power.

How does Los Angeles play a role in your novel?

Setting the book in Los Angeles, I knew that it would easy to drift toward cliché with glamorous party scenes and clashing egos and such. I tried to get underneath all that by focusing on the grueling labor involved in throwing star-studded event.

If there are celebrities in attendance, it’s because Emily and her colleagues put a huge amount of muscle into getting them there. Emily is not having fun at these parties. She’s working them. It was important to me that she be good at her job. To me, a large part of LA is about people making tremendous personal sacrifices for punishing jobs.

You have worked as an actor, a comedian, and host of a travel show on television. How did that work prepare you to write your first novel?

I’ve always worked as a storyteller in one form or another. Early on as an actor, I learned how to hone characters by giving them clear objectives. Working in television was especially helpful in learning how to move a story forward. I spent years as a journeyman producer, churning out episode after episode, which was great practice for when I finally had the time and motivation to start writing my own work.

“If it hadn’t sold, those years working on the book would still have been worthwhile.”

First off, I volunteer as an adult literacy tutor and believe wholeheartedly in a healthy amateur tradition. If you’re writing, you’re a writer. Enjoy it!

The process of writing The Receptionist brought me happiness and community. If it hadn’t sold, those years working on the book would still have been worthwhile.

If you do want to venture into the marketplace, don’t be shy about sending out your work. You’ll only get to know how your voice fits in the market by racking up rejections and then going back and retooling.

Wonderful words of advice! Congratulations on your debut, looking forward to reading your next one! 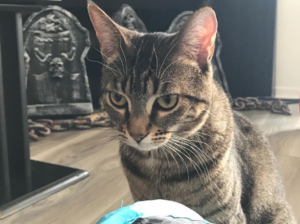 Tigey talks to the crows who flock outside our living room window.

Since I don’t speak Cat, I’m not a hundred percent sure what she’s saying, but I’m guessing it’s something like, “Come inside, crows, and let me kill you.”

I feel bad for her because I don’t think the crows are aware of her at all. It’s more like she’s just mumbling to herself. 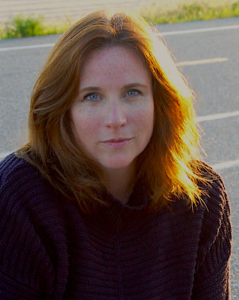 Kate Myles has worked as television producer for a variety of networks, including Discovery, OWN and the Food Network.

Before her producing career, she was an actor and comedian, enjoying a two-year stint as a host of the Travel Channel series, Not Your Average Travel Guide, among other adventures.

Her short fiction has appeared in Quarterly West, Necessary Fiction, and Storm Cellar. The Receptionist is her first novel. She lives in Los Angeles with her husband and son.

Elena Taylor is the author of All We Buried, available now in print, e-book, and audio book format at all your favorite bookstores, libraries, and on-line retailers.