Comedy to Crime: The Making of a Crime Novelist

Comedy to Crime, Wendy Whitman’s career spanned working for top comedians to law school to Court TV. Find out how it all culminated in her first novel, Premonition. 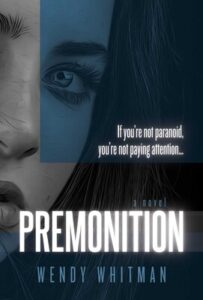 Cary Mackin is a TV journalist who has covered crime for nearly twenty years. After losing her job she moves to a small town in Connecticut—only to get caught up in the web of a deranged serial killer.

Cary has a dark secret that drives everything she does: a deep-seated, lifelong fear that one day she will be murdered.

As the madman Cary stumbled upon continues to terrorize the beautiful countryside where she now resides, will her premonition come true?

“Premonition…a psycho-thriller roller coaster ride that probes the dark corners of one woman’s seemingly overwhelming paranoia…or is it? From a crime and justice expert, Premonition nails every detail of the criminal mind, the hunter and the hunted. Premonition is full of twists and surprises…I love it! Bravo!”

Comedy to Crime —The Interview with Wendy Whitman

Tell us about Premonition and your road to publication:

Well after working for Court TV for the better part of fifteen years and then on the Nancy Grace show for several more, writing a book seemed like a natural progression.

At first I thought of doing something along the lines of non-fiction: a particular case I was obsessed with or my take on the legal system. But then one night I literally woke up and figured out how I could do all that through fiction: a crime thriller.

So I started writing and stayed up until five o’clock in the morning putting my thoughts onto paper. Over the next four months the words flowed out of me until the first draft was completed. Through the protagonist I was able to highlight more than twenty true cases, note failings I see in the justice system, provide safety tips I gleaned from specific cases, and give “inside baseball” anecdotes, a behind-the-scenes look into how crime is produced for television.

After rewriting and editing for an additional period of time I reached out to my contacts and was fortunate to have Post Hill Press express interest in publishing my book. The rest as they say is history.

What should readers know about Cary Mackin? Are the two of you a lot alike?

I’m sure it will come as no surprise to anyone that I based Cary Mackin, the protagonist of Premonition, on myself and my own experiences. That’s probably one of the reasons the book just flowed out of me. Cary and I share the same fear: that we will be murdered.

It was a feeling I was aware of from a very early age. I remember hearing about one awful murder after the next in the news growing up in the New York area. One was the case of a five-year-old girl who was kidnapped and murdered. Another was the case the media dubbed the “Career Girls Murders.” Photos of victims Janice Wylie and Emily Hoffert were all over the front pages of every newspaper in New York at the time.

I think that’s when I began to grasp what a scary world we live in. So I attribute my personal fear in part to the many murder cases I heard about growing up. I used to be afraid to go to bed at night. At a very early age I certainly learned that there are things to fear.

Cary and I are alike in this respect. We both empathize with victims and are terrified at the thought of finding ourselves in a similar deadly situation. Cary like me spends much of her time wondering what it would feel like to be confronted by a crazed intruder in the middle of the night.

How could we survive and would we?

You spent several years working as a producer, executive, and reporter for Court TV and HLN. How did those experiences impact your writing?

I would say that the nearly twenty years I spent producing mostly murder cases at both Court TV and HLN had a huge impact on my decision to write a book.

After all those cases and all the knowledge I had accumulated over the years, I felt a very strong need to share my thoughts. I drew upon more than twenty true cases as I wrote the novel. I also was able to include my take on the judicial system and note some particular things I take issue with.

I used fiction, specifically a crime thriller, to accomplish all of that. And of course one of the most important elements of the book is the way in which I tried to draw attention to certain victims that I feel a particular affinity with because of the particularly brutal nature of their murders.

The book became a means for me to communicate all these different elements. It is the culmination of my career covering crime.

How did your law degree help or hinder your foray into fiction?

I would have to say that going to law school was very enlightening in terms of how our legal system works. So that experience certainly was a huge plus when it came to writing a crime thriller.

Had I never gone to law school I think my novel would have lacked the depth that I believe it has. You build upon your experiences in life and law school was a very important part of what became a twenty-year career covering crime.

Even subconsciously I think that the experience of law school significantly affected the way I approached the book and added greatly to it. Although law school teaches you to think in a particular manner, it also, in a round-about-way, helped me structure my novel. And at the time I graduated and applied for a job at Court TV most of the employees there had law degrees so who even knows if I would have ended up working there had I not gone to law school.

And all those years in crime television led me to write my book so in a funny way it all started with law school.

You worked for both Lily Tomlin and George Carlin. How did those jobs prepare you for becoming a novelist?

Lily and George are two of the smartest people I have ever known.

Observing their creative process from close up certainly helped prepare me for my own future in writing. I consider it a great privilege that I was fortunate enough to work for both of them: two comedic geniuses. Whenever we went out after her Broadway show Lily would spend the better part of the night writing notes on everything from a napkin to any scrap of paper she could get her hands on.

I think that stayed with me because as I began writing my book I would often have to pull over if I was driving to jot down a thought I had that I didn’t want to forget.

George was actually a very serious and introspective person. He was definitely ahead of his time. I decided to go back to law school when I was working for George. It was a very difficult decision but ended up working out well as it led me to Court TV.

I tell everyone that I went from comedy to crime, but in the case of both Lily and George they have such intelligent and socially cognizant humor that it wasn’t a very big leap from jokes to far more serious matters. I’d have to say that working for two intellectual comedians definitely helped prepare me for becoming a novelist.

I am currently writing the sequel to Premonition.

Don’t listen to anyone who tells who how difficult it is to get a book published. Just follow your heart and write about something you are passionate about and the words will flow out of you. That’s what creating a book is all about.

This is one of my favorite Words of Wisdom ever! Thank you for joining us on my blog. I love your journey from Comedy to Crime . . . fiction that is! 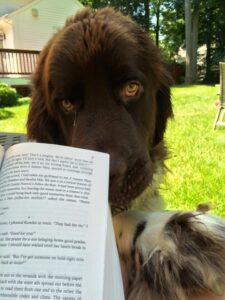 Such a wonderful companion. 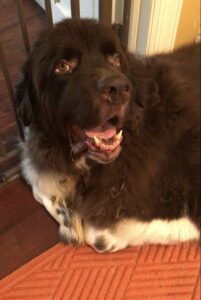 I was so glad to see this request as I am a huge dog lover and my sister’s Newfoundland Obelus plays a critical role in the novel.

Although Obi was my sister’s family pet he and I bonded immediately and I was his person and he my soul mate. Obi was by my side the entire time I was writing the book beginning in August 2018.

In general, unless I was traveling, we were rarely ever apart. Obi was diagnosed with laryngeal paralysis – a neurological disorder – in December of 2017. It got progressively worse until we finally had to let him go in October of 2019.

I lost my best friend and source of support when he died. We had the most incredible bond.

He is the hero of Premonition and a major part of the storyline. Although Obi’s life was short in years, it had a lasting impact. I miss him every day. It is very difficult living without him.

He was an amazing dog. 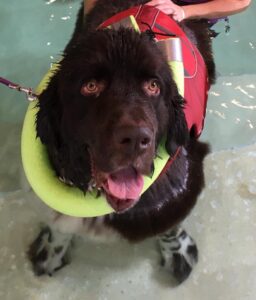 I’m so sorry for your loss —What a beautiful dog! 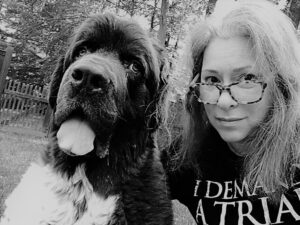 Wendy Whitman has a unique background through her decades-long work as an executive and producer for Court TV and HLN, covering almost every major high-profile murder case in America.

Through her knowledge of the most detailed aspects of the crimes, Ms. Whitman has become an expert on the subject of murder in America.

Before attending Boston University School of Law, Whitman worked for comedians Lily Tomlin and George Carlin. After graduating from law school, the author embarked on what turned out to be a twenty-year career in television covering crime. She spent fifteen years at Court TV and another several at HLN for the Nancy Grace show, where she appeared on air as a producer/reporter covering high-profile cases.

Whitman received three Telly Awards and a GLAAD nomination during her tenure at Court TV.

To learn more about Wendy, click on her name, photo, or any of the following links: Amazon Author Page, LinkedIn, Goodreads & Instagram