Historical Supernatural Mystery with William Shakespeare as protagonist—a fascinating recipe for a debut novel. Discover Greg Hoover and his journey to publication. 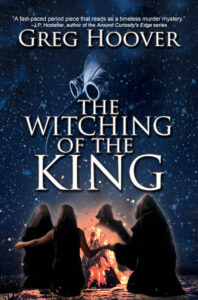 England 1604. At a remote palace in the dead of winter, William Shakespeare and his acting company are invited to perform for King James. When a killer tries to assassinate the king, a priest is murdered by mistake.

Feeling he can trust no one inside the palace, King James appoints William Shakespeare to solve the mystery and bring the killer to justice. But when Shakespeare’s daughter is arrested for witchcraft, the investigation becomes personal.

The Witching of the King blends a fast-paced historical mystery with the supernatural to create a non-stop thrill ride. Follow William Shakespeare as he becomes a reluctant detective, leading up to a final climatic struggle between good and evil. Filled with mystery, intrigue, witchcraft, and more, The Witching of the King is a high adventure you won’t soon forget.

To buy the book, click on any of the following links: Barnes & Noble, IndieBound & Amazon

Historical novels integrate the story with the era in which it’s set, in other words, the story can only happen in that time period. Supernatural stories are a subgenre of speculative fiction that questions our understanding of the natural order of things. Mysteries involve a crime the protagonist solves in the course of the book.

The Interview with Greg Hoover

Tell us about your road to publication with The Witching of the King:

A couple of years ago, I was teaching a class about King James.

I researched his famous conference at Hampton Court Palace in 1604. Tensions were high at the conference, the plague was raging in England, and the newly-crowned king was obsessed with witchcraft. All interesting historical stuff in its own right. But when my research uncovered that William Shakespeare was also at the conference, I knew I had the perfect setting for a novel.

I began to wonder, what if a murder happened during the conference? And what if Shakespeare was drawn into solving the mystery as an amateur detective? After that, my novel wrote itself.

What drew you to William Shakespeare as your protagonist?

I’ve always loved William Shakespeare. When I was a teenager, I wrote a play about his life, and I love his work.

I’ve often thought of Hamlet as kind of a detective, too. So, the idea of Shakespeare’s brilliant mind working to solve a murder mystery inspired me.

Tell us about the research you did for the novel:

I’m fascinated by 16th and 17th Century England, and I read everything I could get my hands on about the period. I also researched a lot about the manners, clothing, culture, and customs of the time.

An early firearm is an important part of the novel, and I careful researched that to make it as accurate as possible.

I also studied about real witchcraft cases of the time, and included several real, historical characters. The research was great fun!

“The Witching of the King is an historical murder mystery novel with supernatural overtones.”

You also have a novella out, Resurrection, Inc. How different was it for you to write a novella versus a novel?

It was a very different process. I love the literary form of a novella, and enjoyed writing in that medium.

The challenge is to be both concise and complete at the same time. A novel, however, gives you more “room” to grow your story.

Also, Resurrection, Inc. is a science fiction story. It explores humankind’s hope for immortality. The Witching of the King is an historical murder mystery novel with supernatural overtones. Both have elements of speculative fiction, but used in very different ways. So, the writing process was different, but both were satisfying.

How did your work as an actor, therapist, and Episcopal priest train you to be a novelist?

I think the old saying “write what you know” is true. My work as an actor helped to give realism to the novel’s focus on Shakespeare and his acting company. Likewise, my work as an Episcopal priest helped make the murder of a priest realistic. It also gave authenticity to the novel’s background in Church history.

Finally, my work as a therapist helped give depth and insight to the psychological dimensions of the novel. All three careers have prepared me to write The Witching of the King.

The Witching of the King is the first book in a series featuring William Shakespeare solving mysteries; I’m working on the next installment.

Unrelated to that, I’m writing a True Crime novel. It is the most personal thing I’ve ever written. It begins with a 5-year-old boy finding a murder victim. From there, it expands into one of the greatest unsolved mysteries of all time. It is based on a true story.

The little boy was me.

The book features my reflections on the murders, and my lifelong quest to make sense of the problem of evil.

Read everything. Write every day. Don’t waste time talking about writing, do it.

Excellent advice! I’m fascinated with your truc crime story, I look forward to having you back on my blog with your next projects! 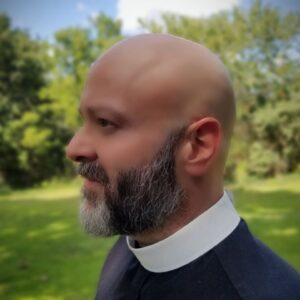 Greg Hoover, an award-winning writer, has been an actor, playwright, therapist, and priest.

He and his wife have four children, and live surrounded by nature in their country home.

Greg loves the outdoors, hiking, exploring, traveling, and playing guitar. The Witching of the King is his debut novel.