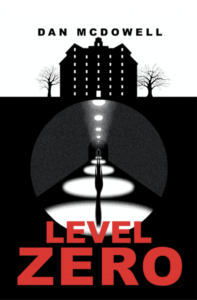 “The Shining meets Dante’s Inferno … brimming with sinister surprises sure to keep horror fans up at night.” –Best Thrillers

Despite not operating as such for years, a haphazard acquisition of the facility leads Chris Wilkerson down a dark path to uncover its mysteries as he forms a call-center specializing in horror stories. A sinister character lurks in an abandoned tunnel just beneath, manipulating Chris as he struggles to walk a fine line between his love for the dark and the macabre and a collapsing marriage.

Todd Adams, a manic depressive financial advisor, awakens from a coma along with 53 others, fighting to understand unexplained phantom memories that plague them. As each work to unravel their meaning, they begin to disappear into a labyrinth beneath the hotel at the torment of a bizarre captor. Discovering mutual commonality in an unresolved past, Todd works to lead them out.

Will they find the key to freedom?

Tell us about your road to publication for Level Zero:

In September 2019, I wrote a series of horror-themed short stories. I considered the idea of publishing a collection around that time upon sharing them with select family and friends.

As I spoke, engaged, and “studied up” on publishers, I was encouraged to write a standalone novel and release the collection later on as a more-established author. A few expressed interest in publishing at the time but I decided to hold off and continue improving my skills as a writer.

Though the concept of a novel initially seemed daunting, I warmed up to the idea and began to write, and the early phases of Level Zero were born.

I had a first draft completed somewhere around January 2020 (more or less 325 pages double spaced/85,000 words) and submitted to a few publishers. A couple of months went by and the rejection letters started arriving. Most of them were boring templates—cold and heartless.

I didn’t know if I’d made the editor’s sludge pile on the first page or the fiftieth, but that didn’t matter – my work wasn’t selected.

One publisher took a different approach, and that was Black Rose Writing.

They encouraged me because of the potential seen in the work and offered constructive feedback for what needed retooling, stating that they wanted to see it more refined to consider it for publication.

There was no offer on the table, merely the promise of opportunity if I kept working toward it. At that point, I was at a crossroads. Was my self-declared “bestseller” ready to go up against the likes of King and Koontz selling 5 copies to my parents and cousins… or did it belong in a burn pile out behind the doublewide out back? I wasn’t going the self-publishing route. I have nothing against it, and there is certainly money to be made, but I’m not a salesman, nor do I want to be that annoying friend working an angle on everyone I know to buy something they may or may not have interest in.

Writing and selling a niche-genre requires experience and credibility, which was something I as a no-namer know virtually nothing about beyond Google searches.

Bottom line, I want to write the story… and let the professionals handle the rest. With constructive feedback and gracious beta readers, I continued to refine the book over the months that followed. After a good bit of updating and slicing and dicing, I turned in the updated manuscript to Black Rose.

Following their review, in June 2020, I signed a contract. I continued the revision process and the beta readers through the summer and fall and turned in the final draft (down to a sleek 65,000 words) to the company’s design team in December 2020 for our May 2021 release date.

What should readers know about Riverton, Texas?

I like the way it’s described in Level Zero by Detective Neil Penske… “Riverton’s a depressed place – a miserable town with dark secrets that silently eat away at all of us wearing us all to pathetic states of mind.”

In all reality, it’s loosely inspired by Austin, but I’ve given it the creative liberty of being its own place with less politics and even more weirdness because there are too many that take history and locations far too literally. Why limit the boundaries in fiction?

I love historical stories, too, but this universe doesn’t need to be hampered by that.

Tell us about The Oak Hollow Hotel:

It’s built in the 1920s before the Great Depression by a wealthy family in the northern part of town. It stands eight stories high. The trouble is, its past is tormented by duplicity.

Mysterious things like to happen in the basement and on the sixth and eighth floors.

Greed and significant pull in Riverton’s Precinct Three (better known as the Oak Hollow District) leads the family to permit plans for a subway to run just beneath.

Fast forward to the 1950s and the facility has decayed to an eyesore overrun by troublemakers as the hotel shuts its doors.

By the 1980s, when the book begins, it’s more or less a place for vagrants to wander and take residence and completely overlooked by the local cops.

Lorrie Hatcher describes it as a “safe haven for lowlifes and thugs to screw around…” She further describes its affect on her after a teenage encounter, “It was weird… I felt unwelcome when I went in and cursed by the time I left. They say buildings can’t talk… This one did…”

We catch glimpses of the hotel throughout Level Zero — mostly in its decayed 1982 and 1983 state as Chris Wilkerson repurposes it to be the headquarters for a cutting-edge horror hotline. As to further origins, we dig into it even more in the next Nightmare in Riverton Novel, Oak Hollow.

I’m excited to share this follow-up release coming to readers in October from Black Rose Writing.

What draws you to the horror genre?

I see opportunity and I enjoy a good scare. How many horror films get greenlit and end up being colossal failures…? Most of them… How many horror books can the average person name? Not many (except for superfans of the genre)… but names like Stephen King and Dean Koontz are internationally known, right?

Point is, many of the best books have been turned into movies and teleplays. Let’s talk about an exception to the rule from Thomas Harris. I know we’re talking about books, but I can’t help but think of The Silence of the Lambs, the first mainstream horror/thriller novel turned film to win all five of the major academy award categories, despite its incredibly dark leanings.

I don’t think every story has to be told with such a sinister outlook, but that’s one that lingers in my mind all the time as a true showstopper.

As for me, I’m also a movie watcher turned reader (eg. I saw the movie and later bought the book to go deeper into the characters). What also sticks with me about a lot of horror are terrible and mediocre efforts that are presented as if they’re the best that we can do…

If a few of us would buckle down harder, there is great potential to grow the genre to reach a wider audience, rather than be seen as a pile of filth and raunch better suited for the dumpster. I believe a hint of relatability in our stories and characters is the key.

Most ideas are born in the wee hours of the night or early in the morning when I first wake. I typically jot them down in a spiral or in the notes app on my phone. Sometimes a phrase or a situation in my day-to-day life hits like a bolt of lightning and I scribble it down.

I write a few keywords in shorthand to keep it fresh for when I’m ready or able to sit down and write. Many of my scenes start as dialogue and I build the world around it. I can be a bit verbose, but I think it’s a better way to know the characters and what makes them tick. I’d rather make a reader think about it and come to their own conclusion then say… Johnny is this… Johnny did that… and so on.

I have a few works in progress. We’re prepping for the launch of Oak Hollow in the fall. I have another in progress with a working title of RIVERTON NOVELTIES. I’m just in the conceptual phase at this point but the draft is in process.

Read and write every day. Be thankful for critique and don’t let it stick to you. Absorb it and grow, remaining thankful that someone took the time to be honest.

Also, give your Creator and your imagination a little credit. Creating something takes a lot of courage to share with others for most of us.

As for sharpening your writing skills, I love Stephen King’s, On Writing. I also enjoyed Chuck Palahniuk’s, Consider This. Naturally, you should also pick up the little gray ninety pager from Strunk and White, The Elements of Style.

PS: Run from excessive adverbs. It’s hard, but it will improve your writing.

Maggie—I’m a total mischief maker, diabolical in fact—with a touch of OCD. My little alarm clock goes off in my mind at 5:45AM, and I’m not afraid to knock the TV off the nightstand, slap your water glass over, or claw you until you get out of bed to feed me or take me outside to play and chase the birds.

Featured below, I got into the family Christmas tree and got caught. 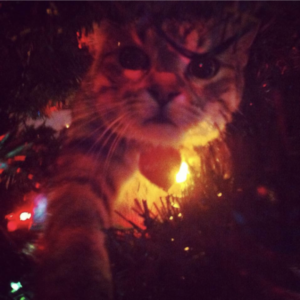 Sometimes, I take a catnap in the home office while my pet dad writes stories. 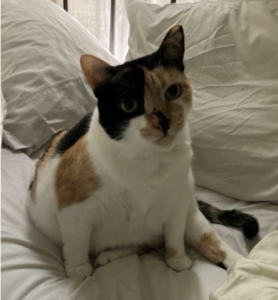 Millie – I’m rotund and enjoy sleeping a lot. I scare easily and stay under the bed or behind door’s most of the time, sneaking out only at night once my owner’s turn in for the night.

I do like to tuck in with them and snuggle once they’re asleep. I don’t go outside much. When I do, I end up in tall trees, chasing possums and snakes, under houses, and spooked by trains and cars.

This is my preferred sleeping position. 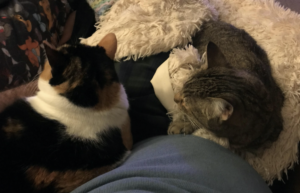 We’re not the best of friends… except when our “parents,” return from long trips and we both get snuggly. Otherwise, we tolerate each other and make fun of how much weight we put on over the holiday season.

Dan McDowell is a writer with a Texas-sized appetite for thrilling and mysterious stories.

When he’s not crunching spreadsheets or resolving technical problems at the office, he can be found trying to channel his inner-creativity into writing, playing music, and drawing stick figures with a set of hands that no surgeon or carpenter should ever trust.

He lives at the foot of the Texas Hill Country with his wife and daughter and two oversized cats named Maggie and Millie.

To learn more about Dan, click on his name, photo, or any of the following links: Facebook, LinkedIn & Goodreads