A Philosopher, a Biker, and a Crime Writer Walk into a Bar

Lee McIntyre, philosopher by day, crime writer at night. Throw in a friend who is an outlaw biker and you have the story of his debut novel . . .

Love people who use their real life experiences to infuse their crime fiction with strong, realistic characters? Don’t miss my interview of martial artist and writer Tori Eldridge, click the link here.

Lee McIntyre is a philosopher who writes both fiction and nonfiction for a general audience. In his non-fiction, he explores such topics as how to defend facts, truth, and science from the recent assaults against them.

His fiction is pure fun, but still aims to make the reader think : how far would you go to save your family? Who would you turn to—if a crisis hit at 3 a.m.— and you couldn’t call the cops?

Lee is a Research Fellow at the Center for Philosophy and History of Science at Boston University and an Instructor in Ethics at Harvard Extension School.

He has a Ph.D. in Philosophy from the University of Michigan (Ann Arbor) and has previously taught philosophy at Colgate, Tufts, Simmons, and Boston University. A black belt martial artist, he lives with two German Shepherds and the rest of his family just outside Boston. 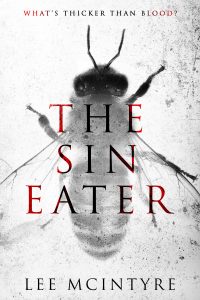 Adam Grammaticus grew up on the wrong side of town, but now lives the good life with his wife Kate and daughter Emma.

Late one night there’s a knock on the door from Child Protective Services, who threaten to take Emma based on a false complaint from the family’s new nanny.

Later, when the nanny turns up dead, Adam becomes the prime suspect and turns for help to his childhood friend Tugg Morgan—an ex-military, Harley-riding drifter—who helps him hide out with an outlaw motorcycle club, to solve the conspiracy and try to get his daughter back.

” . . . over the next seven years as I took writing classes, went to conferences, tore my book down and rewrote it ten times, and finally put it in a drawer.”

I started my first novel (which shall remain nameless) in 2004, when I wanted to have a fun writing project to balance out my more serious writing.

I learned a ton about writing fiction (and the profession) over the next seven years as I took writing classes, went to conferences, tore my book down and rewrote it ten times, and finally put it in a drawer. But I wasn’t done.

I started to write The Sin Eater, in 2011. I put all of the same time and effort into the new book, but now I was a better writer, and understood the levers of power in the industry a little better.

I finally got lucky when I met the head of Braveship Books at Thrillerfest a few years back. And the rest was one of the happiest experiences of my publishing career. It was a long journey, during which I learned the importance of being persistent, and also that crime writers are some of the nicest people you’ll ever meet. (Awww . . . shucks 🙂 )

I heard a true story about a family who had their child taken on a false charge, and the odyssey they went through to get her back.

Simultaneously, I heard an NPR story on the foster care crisis on Native American reservations—and some of the greed and corruption at the center of the state’s role in that—and got the main story line in my head.

Then it was just a question of asking “now if this happened to me in real life, who would I call?” But that was easy.

My best friend in life really IS an outlaw biker….and the rest became my book.

Other than my non-fiction (which just keeps chugging along), I’m working on another novel, about a college professor who loses his family in a freak accident and loses his will to live, then finds new meaning in a series of “ethical” crimes intended to make the world a better place.

Think “A Beautiful Mind” meets “Death Wish.” It’s a very different book from The Sin Eater, but the moral stakes are the same: What is friendship? What is love? What is the meaning of life? Hey, I’m a philosopher….I can’t help it!

I love the intersection of philosophy and crime writing! Maybe all crime writers are philosophers on some level, but you definitely have the credentials to back it up! Congratulations on your debut novel – thanks for hanging out with us here on my blog.