Nikola Tesla and unlimited electricity . . . what great inspirations for a technothriller! Are you a fan of technothrillers? Don’t miss my post with author Tom Chatfield. To read, click the link here.

Colleen Winter: With one foot in the world of technology and the other in the world of words, Colleen uses her electrical engineering degree to create stories that walk the line between what is real and what is possible.

In a previous life she worked as a journalist and is currently a communications consultant in the Ontario electrical industry.

She lives near Toronto, Canada and spends as much time as she can hiking and climbing the beautiful places of the world. 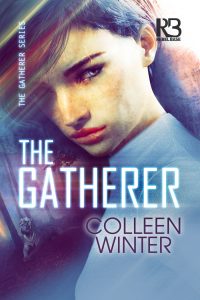 Storm Freeman created The Gatherer to bring free, infinite electricity to the world.

It ushered in an era of decadence and luxury like the world has never seen, until people started getting sick. Including her.

This is where the book begins.

To buy the book, click on any of the following links: Amazon, Itunes, Google Play, Barnes & Noble, KOBO, and IndieBound

Part of this is from my success story published on the Thrillerfest website.

My first foray into publishing came when I attended Thrillerfest in 2015. I had been writing for a long time but this was the first time I had attended a professional conference with the intent of finding an agent or publisher.

I pitched to eleven agents that year and eight said yes to the manuscript. None of them ended up saying yes after I submitted and I distinctly remember one of the agents who said no, saying that the story was too ‘small.’ I was hurt and devastated but after going home and licking my wounds I understood what she was saying.

I also had gone home with an understanding of what it meant to be an A-list author after having observed the ones I had seen at Thrillerfest.  I knew I needed to up my game if I wanted to be a published author.

Two years later I came back with a new book. I pitched to eight agents and one editor. All of them said yes, and within one week of sending the first 50 pages to an editor at Kensington Books, I got a detailed email about changes that would be needed to reconsider the manuscript. Within a month I had made those changes and sent it back.

“A week before I was to attend the conference, I received an email from Kensington saying they were interested in the book and wanted to meet while I was in New York.”

Six weeks later I sent a follow-up email. When I still hadn’t heard the following June, I registered for Pitchfest again at Thrillerfest. A week before I was to attend the conference, I received an email from Kensington saying they were interested in the book and wanted to meet while I was in New York.

That week at Thrillerfest was one of the most incredible of my life. It started with being selected as one of the winners of the The Best First Sentence Contest. That honour was nothing in comparison to the email I received the next day with Kensington Books offering me a three e-book deal.  It still felt like this was something that happened to other people.

After a quick re-adjustment on my strategy, I spent Pitchfest looking for an agent. It was an unexpected position to be in and it felt strange to all of a sudden be in the driver’s seat. It helped that my feet had yet to touch back to the ground after the offer. I spent the rest of the conference speaking with agents and experienced authors to figure out my best course of action. It was the perfect place to be when having to make a decision on first whether I needed an agent and second which one it would be.

With the cards from many agents in my hand, I returned home and spent the next few weeks making my decision. Without exception all of the agents were kind, helpful and didn’t put any pressure on me to choose them. It was a relief to finally make a decision and I will be forever grateful to Kensington Books for having faith in the series and to Gail Fortune of Talbot Fortune Agency for helping me navigate the world of publishing.

“I was doing research on Nikola Tesla and read about how he had tried to invent a device that would provide free electricity to the world.”

What inspired me to write this novel was when I was doing research on Nikola Tesla and read about how he had tried to invent a device that would provide free electricity to the world. I started to think about what that would look like, how it would change our society, and then what would happen if it wasn’t the miracle solution the world had thought. 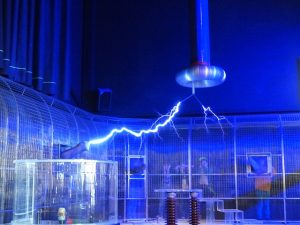 I had also always wanted to write real female characters who were strong, capable and doing incredible things. If these women provided the ultimate solution for our energy needs, and were heralded as saviours, how would they respond when their invention unleashed a plague not only on the world, but on them as well.

The world’s relationship with energy has always been a difficult one, with the wonders and conveniences it delivers coming at high costs. What if we achieved the perfect energy source only to find we had to pay the ultimate price of our lives to continue using it.

How would people respond?

The Gatherer is the first in a trilogy. Since submitting the manuscript for the first book I have been madly writing the second installment.

I am excited with how the second book has developed and by the time this interview is published I will have submitted the second manuscript and will have started on the third.

The second book holds some surprises that even I wasn’t expecting so I am impatient to get the book out to readers so they can follow this amazing story of how a woman tries to save the world from the destruction that she created.

I love your road to publication and the concepts behind your books! Can’t wait to find out how your career unfolds. Looking forward to having you on next year for book 2!