Modern-Day Ninja and a Debut Novel

Do you love writers who bring their own experiences into their writing? Don’t miss my interview with SL Huang, a weapons expert, stuntwoman, and math genius turned novelist. Click the link here to read the post. 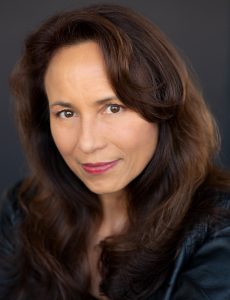 Tori Eldridge is a Honolulu-born thriller writer who challenges perspective and empowers the spirit.

Her debut novel, The Ninja Daughter, is the first book in the Lily Wong series and was inspired by her debut short story featured in Suspense Magazine’s Best of 2014.

Other short stories have been published in several anthologies. Tori’s screenplay The Gift earned a semi-finalist place for the prestigious Academy Nicholl Fellowship.

Tori holds a fifth-degree black belt in To-Shin Do Ninjutsu and has traveled the USA teaching seminars on the ninja arts, weapons, and women’s self-protection. 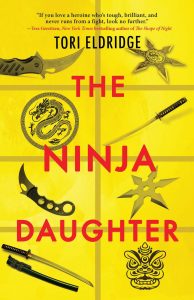 The Ninja Daughter is an action-packed thriller about a Chinese-Norwegian modern-day ninja in Los Angeles with Joy Luck Club family issues who dedicates her life to the protection of women.

When a Ukrainian mother that Lily Wong has rescued returns to her abusive husband, Lily is drawn to another woman, victim shamed by the press, and propelled into a dangerous and complex mystery that teams her with a lethal stranger and forces her to confront her own tragic past.

To buy the book, click on the following link: Amazon, IndieBound, and Barnes & Noble.

I had written screenplays decades ago between a career as an actress, singer, dancer and earning a 5th degree black belt in the ninja arts. One of those screenplays inspired me to write a novel, but since I wasn’t interested in the business of writing—at that time—I tucked the completed manuscript in my closet and went on with raising my sons and becoming a ninja.

Eventually, I caught the fiction bug again, dug out that manuscript, and used it as the project on which to hone my craft. I attended conferences, met editors, revised and submitted my manuscript, wrote short stories, hosted a podcast, and built relationships. Eventually, I signed with my first agent, who I had met years before, and she took over the submission process.

Then I wrote The Ninja Daughter.

When Pam Stack—the producer of my former podcast and Authors on the Air—read it, she went nuts and sent me to Jason Pinter of Polis Books. He had just hired Chantelle Osman Aimeé to spearhead his new diversity-focused crime fiction imprint. The timing was perfect. Jason and Chantelle fell in love with The Ninja Daughter and invited me to be one of three debut authors to launch Agora Books.

“. . . an action-packed thriller about a Chinese-Norwegian modern-day ninja in Los Angeles with Joy Luck Club family issues who dedicates her life to the protection of women.”

It all began with a social media contest challenging writers to create a thriller in two hundred words. I expanded my micro-thriller into the short story “Call Me Dumpling,” and Suspense Magazine published it in their Best of 2014 issue.

As soon as I wrote it, I knew it would become a novel. Lily Wong was so vivid to me—this young bi-racial woman whose future was derailed by her sister’s murder and who puts her life on the line to become a big sister to a city. Her story needed to be told. So, I drew from my own Chinese-Norwegian heritage, my experience in the warrior arts, and thirty-five years living in Los Angeles, and wrote it.

I recently turned in the manuscript for the second Lily Wong novel and have been up to my eyeballs in logistics for the November 5th release of The Ninja Daughter and my thirteen-city book tour.

It’s all very exciting, but the only thing I’ve had time to write are interview answers and essays for online magazines. When I catch my breath, I’ll return to the dystopian thriller I’ve been working on—that is, until Chantelle sends me the editorial notes for book two. Then it’s back to the world of Lily Wong!

Congratulations on your debut and the second book in the series! Looking forward to hearing how all your future projects go! I love the concept of a modern-day ninja!