Psychological Thriller writer Catharine Riggs launches the second book in her Santa Barbara Suspense Series. So excited to have Catharine on my blog to chat about her writing and what comes next!

Lots of great authors with Thomas and Mercer! Want to find more? Read my post on debut author Dea Poirier and her novel Next Girl to Die by clicking the link here. 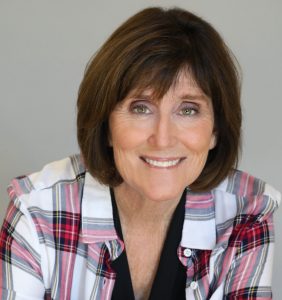 Catharine Riggs lives and writes on California’s central coast. Before her dive into thrillers, Riggs worked as a business banker, adjunct college instructor, and a nonprofit executive.

What She Never Said is the second novel in her Santa Barbara Suspense series.

The first, What She Gave Away, was published by Thomas & Mercer in September of 2018. 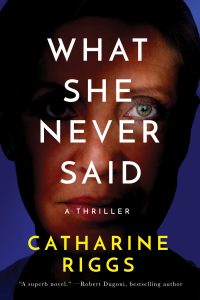 People are dying at a luxury retirement community . . . and not from natural causes.

Ruth Mosby is the VP of operations at Serenity Acres, where the privileged elite go to die. For a hefty fee, wealthy retirees can live the good life in this posh Santa Barbara community—even after they outlive their money. Ruth thinks this is a fine arrangement, but the savvy new boss has a new rule: if you can’t pay, you can’t stay.

Ruth is deeply disturbed when destitute residents start dying at an alarming rate, as if on cue. Even more troubling, a macabre note accompanies each departed guest. Surviving guests whisper about an “Angel” who assists with suicides. Ruth has another word for it: murder.

Ruth enlists her neighbor, an ex-detective named Zach, to discover the Angel’s secret identity. However, the two have a painful history, and Ruth has dark secrets all her own. To solve the mystery, Ruth must descend from her golden tower—but can she bear the consequences of revealing her own sinister truths?

To buy the book, click on any of the following links: Amazon, Barnes & Noble, and IndieBound 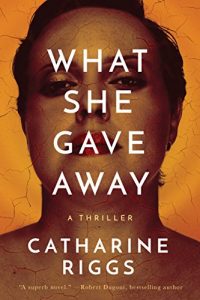 Revenge is anything but sweet in this twisty thriller about two women with very different lives locked in the same deadly game.

Imagining the best way to destroy a person’s happiness is Crystal Love’s favorite game. Devious and unpolished, the plus-sized loan analyst couldn’t be more out of place in her new town of Santa Barbara, where the beautifully manicured women never age and the ocean views stretch farther than the million-dollar lawns. And yet her eye for the power dynamics at play in this tony community is dead accurate.

Kathi Wright, on the other hand, has made it her life’s work to fit in with the plastic people who surround her. But when her husband—a wealthy bank president—dies suddenly, she’s left with nothing. Then the FBI shows up, asking questions she can’t answer and freezing assets she once took for granted.

While Kathi struggles to outrun the mess caused by her husband’s mysterious death, Crystal seems focused on her game. But why? And who are her targets?

Spanning two years and told in Crystal’s and Kathi’s alternating voices, this tautly plotted novel reveals the power of choice and the price of revenge.

To buy the book, click on any of the following links: Amazon, Barnes & Noble, and IndieBound

” . . .the psychological thriller explores the dark side of wealth and privilege . . .”

Your Santa Barbara Suspense novels are linked by place, not character. How did you arrive at that choice for your books?

I hadn’t considered a series when I wrote my first published novel, What She Gave Away. Set in Santa Barbara, California, the psychological thriller explores the dark side of wealth and privilege and the toxic effects of denial. When I came to the end of the novel, I felt my protagonists’ arcs were complete but I wanted to continue to explore the subject.

So I constructed the second in the series, What She Never Said, to be loosely linked by location and secondary characters allowing me to further explore the overarching themes. 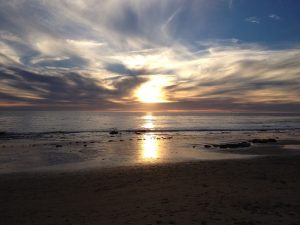 My thriller brain never at rest, I began to wonder what would happen if a supportive community such as his was purchased by a greedy, profit-driven corporation focused on enhancing the bottom line. How would they manage their destitute residents? Thus, my plot was born.

A Psychological Thriller emphasizes the delusional or unstable psychological states of the characters.

Tell us something about you that we won’t learn from your website bio.

I recently completed forty hours of training to receive my California Naturalist Certification. A program of the UC Division of Agriculture and Natural Resources, the California Naturalist Program promotes stewardship of our state’s diverse natural resources through education and service.

They use a science-based curriculum combined with hands-on learning to develop a citizen science approach to understanding our natural environment. One of my reasons for taking the course was to better incorporate the flora and fauna of the central coast into my everyday writing.

My naturalist “capstone” project was the first chapter of an adventure novel set in Big Sur, California.

(Incidentally, Big Sur is one of Elena’s all time favorite places!) 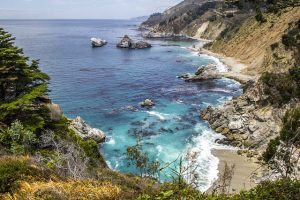 What do you love most about the area that you live in?

I currently live in the small town of Cambria, California, in a house perched above the sea. Each day I rise before dawn and work at a desk fronted by a large picture window where I can watch the sun rise over the ocean as I massage words onto the page.

Writing is hard, getting published is harder. Looking back, what helped you the most to become a Psychological Thriller writer with a 2-Book publishing deal with Thomas & Mercer? How did you learn your craft and stick out the rejections to get where you are now?

Stubbornness combined with a willingness to learn and a sprinkling of fairy dust led to the realization of my publishing dream. Like many authors, I toiled in obscurity for years working toward my goal. During that time, I wrote two “practice” thrillers now safely ensconced in a drawer.

My third novel opened the door to success. My craft had improved, my voices had sharpened. I submitted the first fifty pages to a workshop taught by bestselling author Robert Dugoni and long story short; he forwarded the completed manuscript to his agent. I subsequently secured representation with my dream agent, Rebecca Scherer of the Jane Rotrosen Agency.

But this is no easy success story. Although the novel received positive feedback, in the end it did not sell. I was discouraged but unwilling to pass on the opportunity presented by securing an agent. So I got back to work and in three months’ time wrote the first draft of a psychological suspense novel set in my hometown of Santa Barbara.

Within the year we sold What She Gave Away to Thomas & Mercer in a two-book deal with an option on the third. This month’s What She Never Said is the second book in the series.

The third is written but the option has yet to be exercised. Fingers crossed that happens, but if not? Did I mention I’m stubborn? It’s an important trait.

I’m at work on a near-future thriller about a young mother’s cross-country escape from an abusive relationship and her subsequent encounter with a deadly virus that could signal the end of the world.

Develop your craft. The only thing you control in this business is your writing, so produce the best work you can. Believe in yourself but be open to criticism. And be stubborn. Don’t give up.

Thank you for sharing your journey with us!

I love a good psychological thriller!

Can’t wait to see what happens with book three!

Header Photo: Geralt on Pixabay. Click on the link here for more information.