ThrillerFest 2019 and one last Debut Author

ThrillerFest and one last ITW Debut Author from the 2018/2019 Class!

Visiting New York makes me nostalgic for a history I never experienced. The heat coming up from the streets, the noise, the bustle. I feel like I should “know” it the way a person who once lived there would. Something about New York always feels like coming home.

Something about New York always feels like coming home.

This last weekend I visited New York for ThrillerFest, one of my favorite crime writer conferences. It’s always exhilarating and exhausting in equal measure. One of the highlights was the Breakfast with the Debut Author Class of 2019. I’ve been involved with the Debut Author Program since 2016. I love to engage with all the debut authors past and present.

As many of you know, I try to interview every single one of the Debut Authors from the Debut Author Program. This year there were (if I counted correctly) fifty-six debut authors in the program. Thirty-four made it to this year’s ThrillerFest! Here’s a link to my very first post about a debut author for 2019. 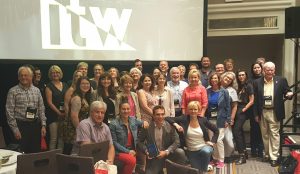 I got to hang out with fellow Crooked Lane Authors James L’Etoile (and #NotMyCat), D.A. Bartley 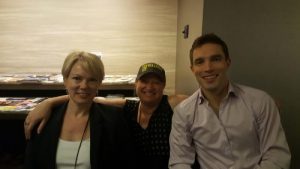 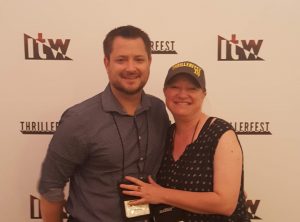 Lots of great panels to attend, including the one I was on with the amazing authors, Shaun Harris, Roger Johns, Lynn McPherson, Nina Sadowsky, and Sheila Sobel, moderated by the brilliant Bryan Robinson. Sheila always looks gorgeous in these photos, whereas, I of course, am yakking – I hope I had something interesting to say.

The City itself is like another person I love to catch up with since the last time I visited. I stayed at Pod 51, which has a very cool rooftop deck. 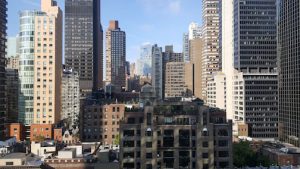 One of my favorite coffee shops, Ground Central, is just a few blocks away. I spent my first day walking the neighborhood, from the hotel to Central Park then back around to the hotel.

I visited a longtime friend and had dinner at The Bar Room on E. 60th Street. A funky joint with great burgers and a very nice Sauvignon Blanc (my go-to wine for hot days).

Hanging with my agent and editor at ThrillerFest

Thursday was a highlight of the trip. I got to see my agent Madelyn Burt and my editor at Crooked Lane, Jenny Chen, in person! So much fun to spend time hanging out over breakfast. We talked about travel, life, and whether or not the perfect book exists.

Then I got to help aspiring writers with Practice PitchFest. Nervous authors could practice their pitches with me before going in front of agents and editors. I like to think I helped a few people hone their pitches and steady their nerves. 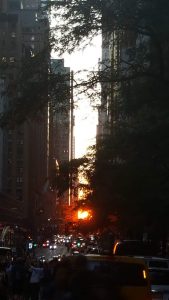 Friday was a blur, with speakers, chatting with writers, volunteer hours, and dinner with the debut authors.

It was also Manhattenhenge! A solar event where the sun lines up with 42nd Street like a modern day Druidic festival.

Saturday started with the breakfast, then more speakers, chats with friends – and ended with the blackout, which wiped out Hell’s Kitchen and part of Midtown in one fell swoop. Did a lot of walking instead of seeing Come From Away, which couldn’t go up without electricity.

I’ll have to get back to NYC soon to see the show another time. But I still had a great time out on the street with 100,000 of my closest friends.

Sunday I headed home with new books to read, new memories to cherish, and a lot of excitement for ThrillerFest next year, when I will be back as Elena Taylor, Crooked Lane Author of ALL WE BURIED, a Sheriff Bet Rivers Mystery. Until then – so long New York . . . 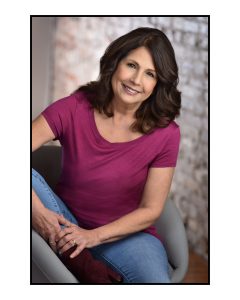 Ellen LaCorte: It’s funny how life redirects your plans. Like many young women in the 1970’s, I pursued a teaching degree. With a major in English, I did what I would do with every minute of my life if given the chance—read great literature and lots of it.
As it would happen, I completed my teaching practicum in my senior year and only discovered then that I really didn’t want to teach at the high school level. Not that the kids weren’t precocious and fun, it was the idea of presenting the same curriculum year after year. Faces would change but the information wouldn’t. Like many others in my graduating class, I was jettisoned from college into the great unemployed.

So I moved to Arizona. It was just as easy to be jobless in Arizona as in New Jersey but with the benefit of Michael, future husband-to-be, already there. I searched for a job as my savings dwindled. With $21 dollars left in my account I became employed as a window salesperson. I’m embarrassed to report that I didn’t quit this job but let’s just say the terms of employment—a very hand-sy boss—were not to my liking. At that point, ignoring all parental advice, I decided to get a job I thought would be fun. I answered an ad for a human resources position.

And a career was born. So much to learn and the faces changed all the time as did the challenges. No day was ever the same. For a very long time, this was my passion and led to wonderful positions as chief HR officer for prestigious universities and also a doctorate in Higher Education Administration.

“But, after thirty-five years in the field, it was time to try something new.”

But, after thirty-five years in the field, it was time to try something new.

I can’t tell you when I started to realize my heart was leaning elsewhere. Maybe it was when I started in community theater, dancing and singing my way through musical productions, sometimes three in a year. I wanted to improve my craft so I took singing and dancing lessons. There were some painting classes and the occasional writing seminar. And I kept ignoring the signs: that I was never happier than when I was singing or dancing or writing or painting. After three years, when I had started to write on a very part time basis, I finally decided it was time to make the leap full time into where my heart had already placed itself. It was frightening but wonderful to start over, with so much new to discover.

The Perfect Fraud is my debut novel. A native New Jerseyite, my family and I lived in Arizona for twenty-five years. Now I write from New Jersey, blocks away from where Washington crossed the Delaware. My husband, Mike, and I have two grown sons, Chris and Nick, and a cat, Emma, who is definitely a reincarnated dog. 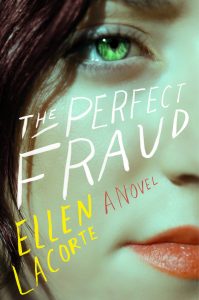 Claire Hathaway is a psychic, faking her way through readings in Sedona, Arizona and Rena Cole is a New Jersey mom with a seriously ill four-year old.

These two women with deep secrets are thrown together by an unexpected meeting that plunges both their lives into chaos.  But it’s a sick little girl whose fate hangs in the balance.

I’d actually written two books before The Perfcct Fraud.  The first one was like the first pancake – you, know, it didn’t come out quite right.  But I did get a call from a great agent who praised the writing and the fact that I had switched careers from Human Resources to Author but then said, “Don’t go out with this one. Shelve it and start another one.”  So I did.

With the second one, which is actually a precursor to The Perfect Fraud, I did secure an agent who did a great job marketing it to the large and mid-size NY publishing houses but it didn’t sell.  It’s disappointing but that’s the reality:  many agented books do not sell.  Part of the difficulty was that I don’t think that this book was as good as it needed to be to get traction and also that this agent was a children’s books agent who didn’t have the best targeted contacts in the market.

I was ready to give up.  After all, I’d had a wonderful 30-year career already and as you probably know, the writing/agenting/publishing route can be positively soul-sucking.  But I decided to try one more time and using everything I learned from writing and marketing the first two, I started on TPF.

I knew this one was a whole different thing from the beginning.  I was getting a lot of requests for full manuscripts.  Informed by my business background, I had a methodical way of approaching the submissions process (documented research into agents who represented my genre, spread sheets, etc.).

At the last minute I decided to also send query letters to those agents who had seen the second book, liked it, but ultimately passed.  One of these was the magnificent Molly Friedrich.  By the time she and I met in NYC (she first took my manuscript with her to her daughter’s wedding in Italy!), I had had two other offers for representation but there was no doubt in my mind that Molly was the person to shepherd this book on its way.
We became partners in May of 2018 and by the first week in July, she had The Perfect Fraud sold to HarperCollins!

“From the cards and my reading, I can see that you’re not giving enough to your marriage.”

I’d had an “interesting” experience with a psychic I visited about seven years ago.  After a sort of mediocre reading, she turned to me and said, “From the cards and my reading, I can see that you’re not giving enough to your marriage.”

She must have noticed the disappointment on my face because she continued, “But, don’t worry.  For $450 I can help you.  I’ll be your soul sister and can not only fix what’s going on your marriage but also lift you to a higher spiritual plane.”  Fortunately, I gathered myself up and left.

After, I was crying and telling my husband about it, apologizing for what a rotten wife I was.  He assured me that I was giving plenty to the marriage and after I calmed down, I thought, wow, what better way is there to get to a woman (and her wallet) than by telling her she’s not giving enough.

It got me thinking about psychics and how some of them do what they do and that led me to developing one of the two main characters in the book, Claire Hathaway.  For the other character, Rena Cole, without giving anything away, let’s just say I’d been collecting articles for years about stories I found interesting, squirreling them away for possible use in a future book.

This is the summer for marketing The Perfect Fraud but I’m hoping that come fall, I can begin on the second book.  Claire will likely be a character in this book, although not a primary one.  I’m excited to start!

Thanks, Ellen! Great to meet you at ThrillerFest!

Looking forward to seeing you again next year.

This is definitely going on my #tbr list! www.elenataylorauthor.com/2021/06/08/i-dont-forgive-you-suspense-aggie-blum-thompson/ ... See MoreSee Less