Find out how life in Hollywood—from actress to Miramax—helped Deborah Goodrich Royce pen her debut.

Deborah Goodrich Royce was an actress for ten years, starting with the leading role of Silver Kane, sister of the legendary Erica Kane, on ABC’s All My Children, and wrapping with a short stint on Beverly Hills 90210. She moved behind the scenes as the story editor at Miramax Films in the 1990s.

Today, she is the president of the Avon Theatre Film Center, an independent cinema outside of New York, and serves on the advisory boards of the American Film Institute, the Greenwich International Film Festival, the Preservation Foundation of Palm Beach, and the Preservation Society of Newport County, as well as the governing boards of New York Botanical Garden, the Greenwich Historical Society and the PRASAD Project. Finding Mrs. Ford is her first novel. 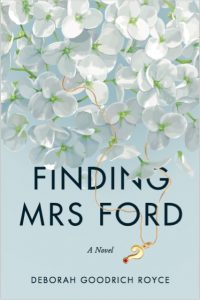 In the summer of 2014 by the sea in New England, Susan Ford’s cocoon of privilege is threatened when an Iraqi man from her distant past boards a plane in Baghdad to come find her.

In the summer of 1979, a much-younger Susan meets wild-as-the-wind Annie Nelson, who lures her to work at a shabby discothèque on the crumbling edge of Detroit. The tether that links these two summers is about to be tightened in ways that Mrs. Ford can no longer escape.

To buy the book click on any of the following links: Amazon, Barnes & Noble, Books-a-Million, IndieBound

My years as the story editor at Miramax Films were really my writing school. I couldn’t begin to count the number of screenplays and novels that I read, synopsized, and analyzed. Yet I did not begin to seriously approach writing on my own until—as I not-so-jokingly joke—my youngest child left the house and I got the real estate in my brain back!

I started Finding Mrs. Ford in 2014, I had a first draft and attended a seminal writers’ conference a year later, and I had an agent a year after that. And it was at that point that the journey hit a snag when my agent had difficulty selling the book to a big five publishing house. In the end, after two more years of revisions and rejections, I am happily housed at Post Hill Press, a small imprint that is distributed by Simon and Schuster.

“My years as the story editor at Miramax Films were really my writing school.”

I have always been interested in the ways that people change when their exterior circumstances alter. In early drafts, I played with titles that had to do with the concepts of slumming and social climbing, and Susan Ford is a woman who does a fair bit of both. So, it was this idea of moving between worlds, classes, social groups, that was my initial inspiration.

From there, the thriller—the danger—grew. For reasons the reader will slowly discover, Mrs. Ford seeks to put the past firmly behind her. The book is an exploration of the difficulty of doing just that.

Ruby Falls! This is a novel that is far more gothic than Finding Mrs. Ford. It begins when a six-year old girl—Eleanor Ruby Russell—is abandoned by her father in a pitch-black cave in Tennessee.

This, as you can imagine, catapults her into an extremely fragile psychological state. We next meet her when she is in her mid-twenties, has been suddenly fired from her starring role on a soap opera, and spontaneously marries Orlando Montague, a mysterious Englishman she meets on holiday in Europe.

Suffice it to say, Orlando might not be as wonderful as he seems, and Ruby might have a secret or two, herself. I just submitted a first draft to an editor.

Congratulations on your debut novel and the exciting follow up. Looking forward to reading both!

Next up, Caleb Smith. Find out how mortality prompted him to write his first novel!

Caleb Smith is an author from Bangor Maine. He studied Business Administration at the University of Maine and is a member of Phi Eta Kappa fraternity.

He is a life student to Christianity, Gnostic Anthropology and the greater mysteries of life.

Caleb works for a large transportation company in freight management. He starting writing 13 years ago as a hobby which has now turned into a second full time job. 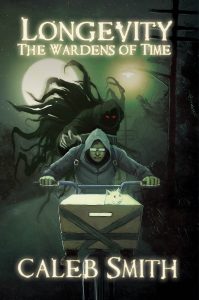 Friendless in his new school except for sassy tomboy Wendy Sherman, Noah Thomas constantly finds himself on the run to escape the continuous torture from bully Mike Nason and his cohorts.

Upon stumbling into a strange bookshop one afternoon while trying to escape the villainous pack, Noah is hurled into a wild adventure.

Noah learns that the bookshop, does in fact lead to the Akashic Records, a place that holds all past spirit lives stored in tablets of light. This new-found knowledge may just be what Noah needs to face his worst fears!

My publishing journey has been a great learning experience. I discovered the “Longevity” concept back in autumn of 2006 while on a long drive home to visit my parents for the weekend. Before then I never thought I would be a writer. I guess it’s in the blood as my grandfather was an English major and wrote to record battles in the Pacific while serving in General MacArthur’s cabinet during WWII.

My father championed English and literature as well, always holding a Sherlock Holmes or Agatha Christie novel close by. He introduced all the fantasy classics to me as a young boy, and I instantly fell in love with the likes of C.S. Lewis, J.R.R. Tolkien, Lewis Carroll, J.M. Barrie, George MacDonald and James Joyce to name a few.

After starting the Longevity series back in January of 2007, I haven’t looked back. Since then I have written 4 Novels in the genres of Fantasy and History and hundreds of poems, including two children’s poetry collections.

After sending a multitude of submissions to agents and publishers starting back in 2017, for (Longevity: The Wardens Of Time) I finally linked up with a solid mid-sized Indie House that has been great to work with on my first published novel. It’s been a fun but most challenging ride.

“After having a near death experience at the age of 22, I think the continuous thought of life after death pushed me to write this novel, after all is it not the biggest question in existence?”

After having a near death experience at the age of 22, I think the continuous thought of life after death pushed me to write this novel, after all is it not the biggest question in existence? Where do we go? What do we see? What happens to us?

It was the search of these thoughts with the combination of experiences growing up that contributed to making this novel complete. I felt that creating a young protagonist, would hold strong when it came time to introduce Longevity to the open market.

Right now, I am writing the second Longevity installment, Sub- Titled: Warrior’s Rise. This novel will be completely different from the Wardens of Time. The story takes place in 1275 A.D. Scotland and holds true to the English / Scottish conflict, stemming from the power-hungry King Edward I, to the opposing southern clans of Scotland who met his invading English forces head on.

In this novel I will be introducing and developing an entire new cast of characters next to a plethora of unique elemental creatures for a classic fantastical outlook. The two connecting factors in these books are the Akashic Records and Noah’s blood line, stemming back nearly 800 years to Scotland.

Fascinating! Congratulations on the amazing start to your publishing career. 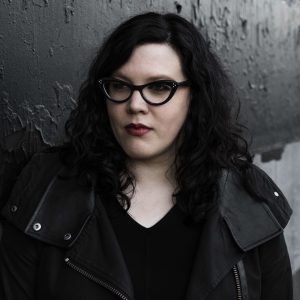 Layne Fargo is a thriller author with a background in theater and library science.

She’s a Pitch Wars mentor, a member of the Chicagoland chapter of Sisters in Crime, and the cocreator of the podcast Unlikeable Female Characters.

Layne lives in Chicago with her partner and their pets. 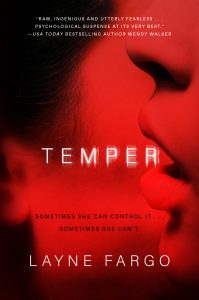 Temper is a feminist psychological thriller set in the Chicago theater world, about the power struggle between a mercurial director and a headstrong actress who thinks she can handle him.

To buy the book, click on any of the following links: Amazon, Barnes & Noble, Book Depository, and IndieBound

Temper was my second finished manuscript (though I have several other false starts stuffed in the proverbial trunk too). I was lucky enough to be mentored by thriller author Nina Laurin in the 2017 edition of Pitch Wars, and I signed with my agent Sharon Pelletier shortly afterward.

I did a few more rounds of revision with Sharon before going on submission in early 2018, and Temper sold to Gallery Books/Scout Press about a month later.

The original inspiration for Temper was a real-life scandal at a theater in Chicago, involving a director who physically, sexually, and psychologically abused multiple people in his company for many years.

The actress heroine of Temper, Kira, was actually the protagonist of my first-ever manuscript, and I found myself wondering how she would respond to a man like that. So I plucked her out of that first failed project and put her this new storyline, which ended up suiting her much better anyway.

I’m writing another feminist psych thriller featuring lots of rage and revenge, this time about a female serial killer who hunts terrible men on the college campus where she teaches.

They sound like fascinating stories! Check in with us again when you get ready to launch book two!