Writing On Boats: Sage Webb on Her First Novel

I’m thrilled to introduce one final Debut Author from the International Thriller Writers‘ Debut Author Program class of 2017/2018. Soon, I’ll be introducing the Debuts from 2018/2019. Hard to believe I’m starting my fourth year as a member of ITW and my third year of working with debut authors. Time flies when you’re having fun. Congratulations to all the debut authors on their first novels!

Sage Webb inherited itchy feet from her dad, who moved the family to Tijuana when she was five years old. She lived in Mexico till high school, when the family moved to the eastern side of San Diego County. Since then, she’s lived on boats and in an RV in search of that horizon, worked as a public defender, managed a yoga studio, and ballroom danced competitively.

Her debut novel, The Unremarkable Circumstances of Inmate 17656-090, won a Texas 2017 manuscript contest for general/literary fiction before Martin Brown’s release of it earlier this year. For short stories, she’s received a number of awards and she has stories forthcoming in the Birmingham Arts Journal and a Texas anthology of short fiction.

She writes for a Gulf Coast health-and-wellness magazine, and received honorable mention in Flyway Journal’s 2017 Notes from the Field Contest. As a panelist at this year’s Houston Writefest, she spoke on writing as activism. She is a member of International Thriller Writers. For fun, she volunteers with the Houston Yacht Club Special Olympics Sailing Team and enjoys to-the-death Skip Bo tournaments with her husband and stepsons.

You are quite the traveler! You’ve lived in Tijuana, San Diego, Hawai’i, the Midwest, and the Gulf Coast, and that doesn’t include all the places you’ve visited. How has all your experiences with different geographies and people and cultural groups impacted your writing?

Traveling has had a huge effect on what I write. I think it’s given me a nice well from which to draw characters and settings. It helps me conjure people who come from different worlds and have different perspectives. I usually slip a couple wanderlust-ridden characters in each book, and they often relate the adventures they’ve had with things like breaking down in rural Hungary or trying to stay dry in Hilo on the Big Island of Hawai`i (generally one of the wettest cities in the world with an annual rainfall of over 125 inches; I had an epic night riding my bike through over-the-seat water when I in my 20s).

Traveling has also made me treasure a strong sense of place in books. When I read, I love going somewhere! Really get soaked in a place. I recently read Robert Galbraith’s The Silkworm and enjoyed the visit to England it gave me. So when I write, I try to give people that experience that I love: traveling on the pages.

“… I wrote it hoping people might take a moment to see past the labels and knee-jerk reactions.”

Your law career started out with you working for the Public Defenders Office, how do you think working on the defense side of the legal system impacts your thoughts about crime and how we deal with it in this country?

It’s affected not just my view of law and criminal justice; it changed my view of life. I was 25 when I started at the Federal Defender’s Office, and meeting people who’d grown up in unspeakable circumstances, suffered unimaginable trauma at the hands of even their mothers, brought home the reality that life is mostly gray areas with very little black and white. My debut novel focuses on a young man convicted of receiving child pornography. It’s based on true-to-life circumstances and I wrote it hoping people might take a moment to see past the labels and knee-jerk reactions. Generally, you say “child pornography” to someone and they reply “MONSTER.” And I get that. And there are monsters out there. But there are also a lot of people who might just as easily fall in the victim category, who are looking at these pictures to try to make sense of the trauma they themselves suffered.

There are no easy answers, but some things seem pretty clear to me. We’re spending way too much money to lock way too many people up for way too long. The political climate creates mob frenzies and discourages judicial discretion, often handcuffing judges with mandatory minimum sentences. I don’t have a total answer, but I do think there’s a better way. OK, off the soap box now. . . .

Tell us about your writing space (do you write on the boat? 🙂 ): 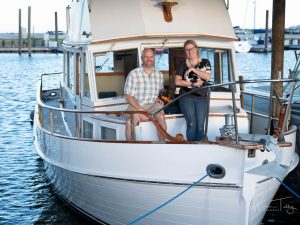 I do write on the boat. Her name is Peregrine for pilgrim/traveler, for the falcon, and for the patron saint of the cancer afflicted. Peregrine falcons mate for life and my husband and I bought this old wooden girl to resurrect her and eventually cruise on. And I suffered with bladder cancer for a number of years, so St. Peregrine is really close to my heart. Anyway, I just do not face writer’s block because the minute I get “blocked up” or stuck, I just have to return to the boat. She frees me in so many ways. I’ve lived on two sailboats, Peregrine (she’s a trawler), and in an RV. I can’t think of a better way to live. Once I’m on a mobile home (in the broad sense of the phrase), I feel free and there’re no blocks.

I also write in coffee shops, on friends’ boats, and even on the beach in Galveston. I love sitting under the pier down there (need the shade!) and writing with the water rolling in. We bought a little sailboat in Corpus Christi before we got Peregrine and writing there was unreal. I just had to drive over the bridge to that funky little town and words poured into my brain. My husband would laugh because I couldn’t get onto that boat and get my laptop open fast enough. It’s just being on the water. I love the book Hemingway’s Boat: I’m sure Pilar was a real inspiration to Papa.

What was the most challenging aspect of getting your first novel published?

Trying to sell a book sympathetic to a sex offender was tough. Period. I got some interesting feedback. I am SO grateful to Martin Brown for their support of the story and getting it out there.

Your debut novel tackles difficult subjects. What led you to this particular protagonist and his story? 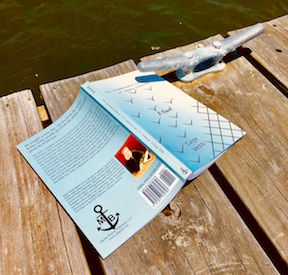 My nameless sex offender is not an anomaly. He’s not a real person, but his circumstances would likely be quite familiar to people in criminal defense. In 2011, Senior Judge Jack B. Weinstein, in the U.S. District Court for the Eastern District of New York, issued a 400-page opinion in a child-pornography case. He wanted to sentence the young defendant to a period of incarceration less than that mandated by the statute.

He wrote long and hard to support his sentence. (He was reversed when the government appealed and he ultimately had to impose the five-year mandatory.) I read that opinion and thought someone should write a book about those themes, help people understand them better. In January 2017, I was selling fair-trade handicrafts from Guatemala at a craft bazaar and not getting much business, so I opened my laptop, and next thing I knew, I was in this sandwich shop with this poor kid. He pretty much wrote his own story and that was that. . . .

So I’m currently querying a legal thriller with romantic elements. It involves two brothers charged with tax fraud, an attorney with a suspended license, a sailing passage to St. Kitts in search of exculpatory evidence, a prosecutor with a mysterious past, and a little boy trying to avoid going into foster care. It’s much lighter than my debut, much more “fun.” I loved writing it. And now, as I query it, I’m into its sequel, which involves those characters’ return and an email scam being run off the Big Island of Hawai`i.

Everybody says it, but I don’t think there’s better advice than READ, READ, READ. We know, subconsciously, what works and what doesn’t. We know what we enjoy reading. If we don’t get those “vibes” into our subconscious, we can’t write beautifully, right?!

Beyond that, I think it’s about being authentic, unselfconscious, real on the page.

And treating ourselves kindly. It’s OK to be kind to oneself. 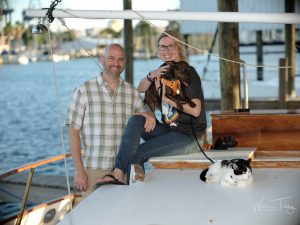