So happy to have fellow mystery author, Cynthia Kuhn visit with us this week! Cynthia and I both launched our first mystery novels in April, 2016. Welcome Cynthia!

The Semester of Our Discontent, an Agatha Award recipient (Best First Novel), and The Art of Vanishing, a Lefty Award nominee (Best Humorous Mystery).

The third in the series, The Spirit in Question, is forthcoming fall 2018. She teaches English in Denver, serves as president of Sisters in Crime-Colorado, and blogs with Chicks on the Case. For more information, please visit cynthiakuhn.net.

You write a celebrated and award-winning cozy series about an English professor who solves murders in her spare time. What draws you to cozies? What elements should a cozy include or not include? 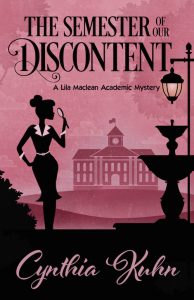 Thank you for letting me visit today—and for that very kind description! What has always drawn me to cozies as a reader is that they’re often humorous and ultimately uplifting: the crime is solved by the end, and justice prevails.

But generally speaking, cozies tend to take place in a connected community, keep the sex and violence offstage, and focus on someone who follows clues and exposes secrets (typically, though not always, an amateur sleuth).

Your other job is as a professor of English, just like your protagonist. What are the pros and cons of writing a mystery series with crossover to your “other” life?

One pro is that you’re immersed in the environment and dynamics, which helps you create authentic details for your fictional world. A con is that you must refrain from writing about things that actually happen, even if they would make a great story!

In addition to writing mysteries, you also write literary studies. How does writing fiction versus non-fiction change your process?

“I realized that the mystery writing community is a genuinely supportive and generous one.”

As president of the Sisters in Crime-Colorado chapter, along with memberships in a number of other mystery writers organizations, you are very active in the writer community. How does that impact your experience as an author? 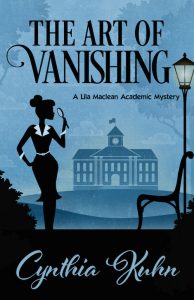 The Lila Maclean series probably wouldn’t have been published if I had not joined groups like Sisters in Crime, Mystery Writers of America, and International Thriller Writers. Conferences like Bouchercon and Malice Domestic have been fantastic as well. I’ve learned so much (and continue to learn) via classes, meetings, panels, workshops, speakers, online conversations, and organization publications.

At the core, the connection with other writers and readers is incredibly inspiring. At first, it surprised me how welcoming everyone was—I couldn’t believe that authors whose books were Actually In Bookstores were even talking to me!—but soon I realized that the mystery writing community is a genuinely supportive and generous one. People help each other, encourage each other, cheer each other on. So grateful to be part of it. It’s like nothing else I’ve ever experienced.

As you get ready to launch the third book in your series, what have you learned over the last couple years about being a series author? Anything you wish you’d known with that first book? Or something you’re really glad you wrote a certain way?

At the beginning, I made a streamlined chart to keep track of characters. But I’ve learned that you must keep more extensive notes about every single character, including the minor ones, because no matter how well you think you know what you wrote in book one, when you’re working on later books, you are not going to remember all the specific details of that character you only mentioned once! (Maybe this doesn’t happen to anyone else. If that’s the case, please don’t tell me.) I’m always amazed at what I DON’T remember about a character. I’m not as organized as you are though, I’m always doing a search in a past manuscript!

Finalizing book three in the Lila Maclean series, which was submitted to the publisher in January. Congratulations! So excited for you!

Read widely, write as much as you can, and join a community of people who write the same thing that you do. Also: never give up!

Excellent final words – thank you for joining us!