Writers Beware: The Perils of the Publishing Industry

I’m very happy to host mystery author Mark S. Bacon on my blog this week. A little about Mark …

Mark S. Bacon began his career as a southern California newspaper police reporter. After working for two newspapers, he moved to advertising and marketing when he became a copywriter for Knott’s Berry Farm, the large theme park down the road from Disneyland.

Before turning to fiction, Bacon wrote business books. His articles have appeared in the Washington Post, Cleveland Plain Dealer, San Antonio Express News, and many other publications.  Most recently he was a correspondent for the San Francisco Chronicle.

Take it away Mark!

The Perils Of Appropriating Pop Songs by Mark S. Bacon 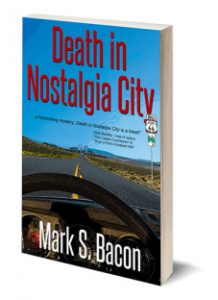 Few things are worse for a writer than the panicky feeling you get when your book is about to go to press and you realize you made a serious mistake. A costly mistake. A thousands-of-dollars mistake.

But I’m getting ahead of myself.

My first mystery novel, Death in Nostalgia City, takes place in a giant Arizona theme park. Nostalgia City is a complete re-creation of an entire small town as it would have appeared in the 1970s. Aimed at baby boomers and other seniors, the park includes period cars, clothes, food, fads, shops, restaurants, hairstyles and music. It’s the first in my mystery series.

To create the impression of the past for park visitors—and readers of the mystery novels—I use references to events from the 1970s and I dress park staff in bell bottoms, white belts and other recognizable styles from forty-plus years ago. Oldsmobiles, Pontiacs and Plymouths are among the cars of the past cruising the streets of Nostalgia City. 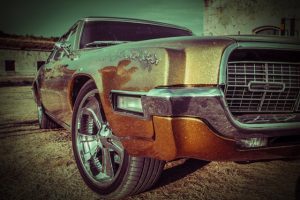 Because music played an important part of the 1970s, my characters listen to the Rolling Stones, Three Dog Night and other memorable groups and I mention popular songs of the period. So far, so good.

In my first mystery, songs are vital to the story. I use music as a murder clue. In one scene I have my two protagonists listening to Jefferson Airplanes’ “White Rabbit” and I spell out some of the lyrics. I love the song. It carries memories for those who grew up in the period.

But long after my manuscript had been submitted, edited and formatted for publication, it dawned on me that I might be getting into trouble using lyrics.

Having written several nonfiction books, I’d learned the rules for quoting material from other books. In general, the doctrine of fair use permits you to quote short passages provided they make up a tiny portion of the entire work. And you need to get written permission.

So I called my publisher. My editor told me she would contact the legal department for an opinion. But I didn’t wait. A little online research told me that when you quote lyrics you had to obtain permission from a song’s copyright holder. So who was that?

I discovered that Jefferson Airplanes’ singer Grace Slick wrote the song, but no longer controlled the rights. More research brought me to the legal department of the company that now owned those rights. I had forms to fill out, procedures to follow and the cost would be imposed on each word of the lyrics I used. Too expensive and too late.

By then I started worrying about using just song titles, let alone lyrics. Even before I heard back from my publisher, I was rewriting the chapter. I killed the lyrics and made changes just before the print book went to press and the e-book was released. I could use song titles, I was told. Whew. 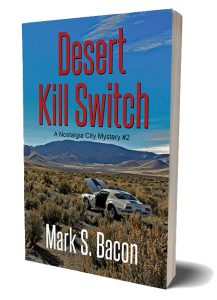 If you scan the Internet, you can find similar stories from writers who wanted to use song lyrics in their books. In an article in The Guardian, UK author Blake Morrison tells a similar story to mine, although he decided to pay for lyrics. Quoting lyrics, he reports, cost him the US equivalent of about $6,000.

Authors of any artistic work, whether novels or songs, deserve to have their creative work protected, and as Morrison points out, the idea that artists have property rights is at least as old as ancient Greece. Morrison advises authors never to quote lines from pop songs.

I won’t. Even though I’d love to recall what the Lewis Carroll portal rodent spoke.

Great post Mark, so lovely to have you as my guest. I’ve always been interested in this topic, as I like to incorporate music in my theatrical work. I’ve had characters sing familiar songs onstage. As one last note, songs published before 1923 are in the public domain and can be used without copyright issue. Which works great when you’re writing a historical piece! Song titles, as you note, can’t be copyrighted, so they are usable regardless of the date of publication or release.