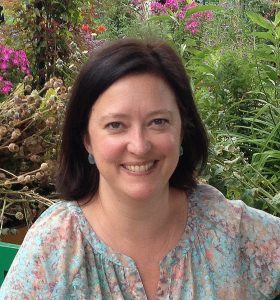 Tracee de Hahn is author of the Agnes Lüthi mysteries, which were inspired by her years living in Switzerland. Prior to writing full time she practiced architecture and was head of university alumni relations at a major west coast university. Currently she and her husband live in southwest Virginia with their Jack Russell Terriers and Flemish Giant rabbit.
Swiss Vendetta (St. Martins /Minotaur 2017) introduces police inspector Agnes Lüthi when she is called to investigate the death of an art appraiser on the lawn of a château near Lausanne. A blizzard descends, trapping her with the suspects of her first murder investigation, and casting her emotionally adrift as she struggles with her husband’s recent sudden death.

A Well-Timed Murder (St. Martins /Minotaur 2018) throws Agnes into the world of luxury watchmaking when a renowned watchmaker dies in suspicious circumstance in the days leading up to Baselworld, the world’s most prestigious watch and jewelry show. (Available now for pre-order)
To learn more about Tracee, you can find her online by clicking on the following links: on Twitter on Facebook on Pinterest and on Instagram
THE BLOG POST
As a debut author, I’m often asked “Why this book? These characters? This setting?”
All fair questions.
Many, if not all, debut authors have a number of completed manuscripts under their belts. Some we would cringe to expose to the light of day, others simply didn’t make it to market. In my case, by the time I completed Swiss Vendetta I’d learned enough about the business of publishing to know that writing the book doesn’t mean ‘the end’ for the author. The day you think it’s done is the day that your agent and editor will have excellent ideas for further revisions. There might be several rounds of revisions with plot changes, re-balancing themes, and fine tuning of scenes. Eventually, a copy editor will want to tidy other details. Once the book is bound and released you’ll want to talk about it in bookstores and at conferences, and with book clubs and other local groups, and, of course, in blogs. Hopefully while writing the next book. In other words, publishing a book requires a commitment beyond merely finishing the manuscript. You will live with it daily for years, make sure you want to.
When I submitted Swiss Vendetta, I knew it had elements that would keep me interested in an ongoing series. At the core of this was the setting. My husband is Swiss and we lived in Switzerland for several years, dividing our time between Lausanne and Zürich. It is a relatively small country, idyllic in its beauty and, on the surface, perfect. I knew differently.
While the landscape and people are wonderful, no place is without malice and to write mysteries you need malice aplenty. With an eye toward seeding the countryside with murder, I surveyed the high mountains, very deep lakes, cosmopolitan cities and small, truly isolated villages. Switzerland has four official languages (German, Italian, French and Romansh) which sets the tone for a diverse culture even amongst longtime citizens. And, despite being landlocked, Switzerland is a cross roads. It is a manufacturing center for luxury goods, headquarters for banking, insurance and pharmaceutical companies, and is home to many international organizations, including the United Nations. Taking a look around, I was confident my choice of setting was an adequate seedbed for conflict small and large.
Place sets the tone for many of the books we love – from Louise Penny’s fictional Three Pines to Michael Connelly’s Los Angeles. In each place the terrain and the climate play a role. Who can imagine Connelly’s Mickey Haller anywhere but LA as he navigates the geographic, cultural and economic divides of that megalopolis? In my own writing, and in particular in Swiss Vendetta, place is a character. A castle darkened by a power outage isn’t welcoming despite the efforts of the inhabitants. A partially frozen lake becomes forbidding. Setting can’t be separated from story.
That’s why, for me, the setting comes first. Where did the crime take place and what kind of crime would happen there? I’ve often imaged the loneliness early settlers experienced on the American prairies. A wife, husband and children. The wind whistling across the plains, no near neighbors, wolves baying in the distance. Dread of the unknown. How did they cope with the isolation against all that vastness? Some didn’t. Firearms and farm tools were at hand. I’m certain that there were more acts of passionate rage and despair than we would care to know. Bodies buried and forgotten. With few neighbors, who would question a swift illness or tragic accident mentioned weeks or months after the fact?
Today, society is more connected. There are certainly more records kept and questions asked about any death. But the underlying passions continue, no matter how beautiful or wealthy the surroundings. I plan to take advantage of this for some time to come.