This week, continuing my series on the authors in this year’s Debut Author Program through the International Thriller Writers, I’m heading north of the border.  The Canadian border that is.
Elle Wild, author of the debut novel Strange Things Done, grew up in Canada and now lives on a tiny island in the Salish Sea. Well-traveled and well-read, Elle is no debut to storytelling, her career as a filmmaker continues alongside her novel writing. For more information about Elle, visit her on social media.
TWITTER @ElleWild_writer
Facebook
THE INTERVIEW
You are also a filmmaker. How does telling stories with film differ from telling stories through novels (or fiction, since you also write short stories)? 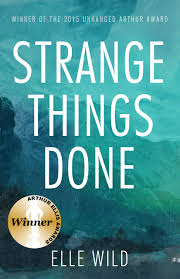 Oh, that’s a great question. I think the key thing is that you have to “show” more in a screenplay and “tell” less. In a film, you can’t necessarily access a character’s inner thoughts in the same way that you can in a novel (or short story), but you can use little visual clues about a character to give the audience a hint. For example, in the film Chinatown, we are shown Jake Gittes’ expensive shoes and well-tailored cream suit before he delivers the line, “I won’t take your last dime.” The viewer understands that Jake is lying. Of course, these kind of visual clues are well-employed by great fiction writers, too. The use of the colour green in F. Scott Fitzgerald’s The Great Gatsby comes to mind as a visual trigger for the theme of greed and the relentless pursuit of money. It’s clearly a story about class conflict and the American Dream gone wrong, and the imagery works to support that.
The other thing that screenwriters have to think more about is the speed/tightness of the plot, of course. You have to work harder to find a clear “way in” to the story, and the story has to be delivered and wrapped up in something like 90-120 pages for a feature screenplay. I love Michael Ondaatje’s The English Patient, and it’s also one of my favourite films, but the focus in the story had to change when it was adapted for film. The film spends more time on the romance between Almásy and Katherine as the “A” plot than the novel does as a result.
Tell us about the island where you live. How does your geography impact your writing? 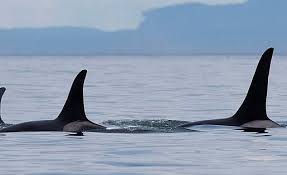 Currently I live on an island in the Salish Sea named after the bones of dead whales. It’s a tiny island, with four cafes and two grocery stores. Everyone knows everyone, and everyone’s business. When my debut novel was released, people in the grocery store would tell me what page they were on when I bumped into them in the produce section; it’s that kind of small.
The island may be miniscule, but the trees and the tales here are tall. There is always someone just back from swimming who knew someone who had to get out of the water before the orcas got too close. (And yes, we know that there has never been a documented case of orcas eating a human. That doesn’t mean we stay in the water once we see the dorsal fins.) People here are hugely into kayaking, and wait all year for the magical “bioluminescence nights” where the waters sparkle like the Northern lights and you can lift multitudes of tiny “stars” out of the sea with your paddle. I haven’t written about my island yet, but I’m sure I will. Eventually, everywhere I live gets under my skin and comes out in a story.
What draws you to small towns as a setting?
I find small towns fascinating because they present a double-edged sword of knowing your neighbours, but sometimes knowing too much about your neighbours, if you know what I mean. I love to figure out what makes people tick, and that’s much easier in a small town.
I’m a bit of a gypsy and like to move around a lot. This usually means that I’m looking into all of these small towns with a kind of a “window” perspective, peering in from the outside because I’m never around long enough to become fully a part of the community. The impermanence of my lifestyle coupled with the fact that I’m a writer who works from home, largely in isolation, probably contributes to the sense of distance that finds its way into my work. My protagonists are usually outsiders. 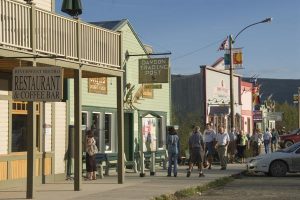 For example, I once spent a year in a small village in Japan, and that setting became the focus of my documentary film called Diary of an Alien. My time in Northern California in a town called Santa Cruz found its way into a short story called “California Pure” that was published this year in an anthology by the Canadian Author’s Association. My debut novel, Strange Things Done, was based on my time as an Artist in Residence in Dawson City, in the Yukon. I’m currently working on a Victorian thriller that is set in London and Dorset, based on the four years that I lived in the UK, (which I miss terribly – I’m a huge Britophile). I think what attracts me to small towns is the strong sense of community, and being part of the social fabric more so than an urban lifestyle. I’ve lived in cities, too, but I’m definitely finding myself returning to my rural roots – I grew up in the countryside in Canada where I spent my childhood fishing and reading. I love to be close to nature, and I love to write about it. I’ve always been very inspired by Thoreau.
The story in your novel is entwined with the natural world, did that come easily to you? Was that a conscious choice? Or was that something you deliberately set out to do?
The natural world is a very important part of my lifestyle, and I think a big part of the Canadian consciousness because it shapes who we are, particularly in the North. I don’t think you can write about the North in Canada without some kind of a man vs nature theme.

When I was an Artist in Residence in Dawson City (Yukon), I arrived just before freeze-up, when the ferry to West Dawson is dry-docked, the Top of the World Highway to Alaska closes, and the town becomes increasingly isolated as the main highway to the south, the Klondike, begins to snow over.
At this point, the population of Dawson plummets with the temperatures. In summer, the population of Dawson is roughly 60,000, but by freeze-up, there are just over a 1,000 “sourdough” (people tough enough to survive the winter) left. Certainly that informed my story, and the feeling in Strange Things Done that the natural world is an antagonist and an obstacle that the characters must overcome, on top of everything else that’s going on.
Your style has been described as Nordic-style Noir … what does that term mean to you? How would you define your writing style for your readers?

I can’t speak for others who might call my work “Nordic-style noir”, but to me, when I think “Nordic noir” I think of something that’s neo-noir in a Nordic setting. I also think of modern crimewriters like Jo Nesbo, Stieg Larsson and Peter Høeg. I particularly loved Høeg’s Smilla’s Senseof Snow and the way it (to quote the New York Times) approached “the suspense novel as exploration of the human heart”.  I love the idea that “white” is the new black/noir, so in Nordic noir, the world of swirling snow is just as terrifying as the dreaded dark alley of classic noir.

I don’t know how I would define my writing for readers. The Toronto Star calls it, “The Girl on a Train meets Robert Service.” I think I prefer for readers to come with an open mind, lest they have unreasonable expectations for parallels. That said, I can see that, like Nordic noir, the northern setting in Strange Things Doneis an antagonist in its own right. I can also understand why people have compared Strange to the Icelandic TV series Trapped; both are about small communities in northern environments who are cut off from the rest of the world during winter storms.
What are you working on now?
Well, strangely enough, I’m still working on, Strange Things Done, even though it’s already been published as my debut novel. I won a screenwriting contest, blind-judged by Wes Craven (Scream, Nightmare on Elm Street), among others, for a screen adaptation of Strange Things Done. The contest, called “From Our Dark Side”, is run by Women in Film & Video Vancouver (WIFVV). The judges pick five winners, and then WIFVV supports these filmmakers with a 5-month film incubation program, including a professional story editor. I have been working with story editor Sara Snow (Artic Air, Little Mosque on the Prairie, Degrassi) on the screen adaptation of Strange. The whole experience culminates in all five women in the program pitching in front of an audience of producers at the FRONTIÈRES international film co-production market in Montreal, which just happened this past weekend. There are some exciting things going on behind the scenes as a result, but I can’t say too much about them yet. Please cross your fingers in the meantime!
The other things I’m working on are various literary short stories, (I’ve just been published in the National Capital Writing Contest’s 30th Anniversary Anthology) and my second novel, a Victorian thriller set in London and Dorset.
Final words of wisdom:
I would like to say to you that if you persevere, and edit ruthlessly, draft after draft after draft, you will get there in the end: I’m proof of that. In the words of Ira Glass, it’s going to take a while for your skill to catch up to your ambition and taste, and you just have to “fight your way through that.” Honestly, I feel like I’m still fighting my way through that.
Good luck!
Thanks Elle, for spending time with us on my blog!