LS Hawker talks about Writing, Publishing, and the beauty of Kansas 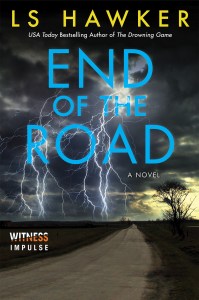 To shake things up a bit this week, I’m including an added bonus interview. LS Hawker debuted her first novel, The Drowning Game on September 22, 2015. Her second, Body and Bone came out May 6, 2016, and her new novel, End of The Road launched January 31, 2017, all with HarperCollins Witness. Not only is LS a fantastic writer, but she’s also part of the ITW Debut Author Program team. Thank you for joining me to today LS!
Let’s start out with a little bit about LS: LS Hawker grew up in suburban Denver, indulging her worrisome obsession with true-crime books, and writing stories about anthropomorphic fruit and juvenile delinquents. She wrote her first novel at 14.
Armed with a B.S. in journalism from the University of Kansas, she had a radio show called “People Are So Stupid,” edited a trade magazine, and worked as a traveling Kmart portrait photographer, but never lost her passion for fiction writing.
She’s got a hilarious, supportive husband, two brilliant daughters, and a massive music collection. She lives in Colorado but considers Kansas her spiritual homeland.
The Interview
Tell us about the road to writing your first novel. 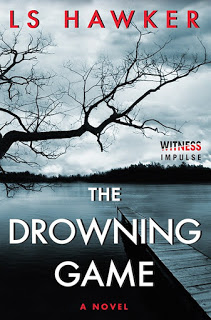 ​THE DROWNING GAME was the first novel I published, but not the first one I wrote. The first one I wrote when I was 14, and it was crap! But I digress. It took me about three months to write the first draft of THE DROWNING GAME, and then I rewrote and polished for another eight months before I pitched it to Michelle Johnson of Inklings LiteraryAgency at Pikes Peak Writers Conference. She asked for the full manuscript, which I sent her. Then I didn’t hear anything, so after three months, I figured that was a “no.” So I sent it out a few other places and had some solid interest from a small press.
Then on Super Bowl Sunday, 2015, I got an email from Michelle requesting a phone call. We talked and she offered me representation. I told her about the small press and she asked me to make a few minor changes so she could send it out to the big 5 that coming week, which I did, and she did. Most of them requested the manuscript, and Michelle sold it to HarperCollins Witness Impulse within 50 days. Six months later, it was published. Seven months after that, it was on the USA Today bestseller list.​ (Super Bowl Sunday, 2015 will forever go down in my memory as the day the Seahawks lost to the Patriots … I’m going to try to replace that image with LS’s excellent phone call!)
You’ve written three wildly different novels, how did you prepare for such different characters and plots? What is your research process like?
​I typically take situations from my own life and friends’ lives, or stories I’ve heard. Often I will do a mashup of several different stories to come up with unique plots. I love radio programs and podcasts where people tell true-life stories, and I’ve used those for inspiration more than once.
I always consult with a Jefferson County Colorado deputy sheriff for police procedure and an Arapahoe County Colorado prosecutor for legal issues. They’re very helpful.​
You’ve lived in Colorado and Kansas. How has that environment impacted you as a writer? 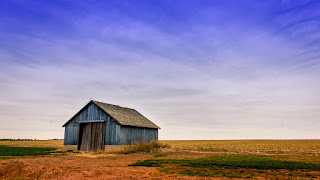 People think I’m nuts when I say this, but Kansas is a magical place for me, stretching back to when I was a kid. My grandparents lived in a tiny town that was picturesque, and very different from suburban Denver. And now that small towns all over America are dying and agriculture has transitioned to factory-based instead of family farms, Kansas is a great setting for thrillers and suspense, because there’s a sense of loss there, a lot of abandoned buildings and even whole towns, a bleakness that adds to the feelings of terror, desperation, and sadness that I like my thrillers to evoke. (I’m going to do a book club meeting in Hays, KS in April … I’m so excited to visit!)

Now that you have three published novels under your belt, what do you wish you’d known when you started?
That’s a tough one, Elena, because my journey with HarperCollins has been so wonderful. It has exceeded my dreams, to be honest, which is not something you usually hear, right? I guess I’d have to say that I wish I’d learned how to write even when I don’t feel like it—I had to learn to do that after I got my contract and had to produce! (Wonderful about your journey! And a good lesson to learn)
The publishing industry is going through big changes with ebooks, audio books, and multiple paths to publication. Where do you see the industry going? How would you like to see your career go? 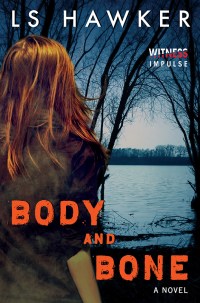 The thing I’m excited about in publishing is the multi-media aspect of it—the integration of video, audio, and graphics into what used to be a very two-dimensional form. One way that I’ve leaned into that is by creating websites for my novels—for the current release, END OF THE ROAD, I’ve created a website for the company my protagonist works for, which adds another dimension to the book (sipratech.com). For my second book, BODY AND BONE, I put up a blog for my main character (unknown-legends.com). I also make music playlists for each release.
How would I like my career to go? I want to write novels until I croak, plain and simple. (Love this answer!)
Final Words of Wisdom:
This isn’t that short, but I’ve had this hanging above my desk since I first got out of college, way last century. It perfectly illustrates why I’ve succeeded in this crazy business:
“Nothing in the world can take the place of Persistence. Talent will not; nothing is more common than unsuccessful men with talent. Genius will not; unrewarded genius is almost a proverb. Education will not; the world is full of educated derelicts. Persistence and Determination alone are omnipotent.”
—Calvin Coolidge