What Does a Venezuelan Jail, Gang Members, and a Brand New Novel Have in Common? Christina Hoag!

Today is the last day of my amazing blog tour. What a fantastic experience, thank you Escape With Dollycas! You can read all about my final stop- Cassidy’s Bookshelves – by clicking on the link here.

But now it’s time to look forward to new things. I’m very excited to be launching a new blog series. I have the pleasure of being the chair for the International Thriller Writers‘ Debut Author Program. In that position, I get to meet and interact with a host of debut mystery and thriller writers as they navigate their first year as published authors. Having just gone through that same experience myself, I decided it would be a lot of fun to host as many of them as I can on my blog. Check back regularly to find out what new author graces the cover of my page.
Christina Hoag – debut author of Skin of Tattoos

First up, I have the pleasure of introducing an amazing writer and journalist. Christina is the author of not only her first novel, Skin of Tattoos, but also the non-fiction book Peace in the Hood: Working with Gang Members to End the Violence, and the YA novel Girl On The Brink. For more information, visit Christina at www.christinahoag.com
The Interview 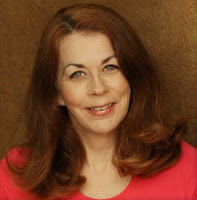 You have an amazing bio – threatened by a death row inmate, interviewing gang members and thieves, not to mention speaking fluent Spanish and French and traveling the world. I’d love to hear more about any of those amazing events – tell us one story about your colorful past.
I don’t normally talk about the things I’ve done because I don’t want to be seen as bragging, nor can people really relate to them. But since you asked! Here’s one.

I was doing a story on Venezuela’s prison conditions for a human rights magazine, particularly focusing on an infamous jail in Caracas called El Reten de Catia. I needed to get inside to talk to inmates and see the conditions for myself. I was denied entry by the Ministry of the Interior because they could not guarantee my safety inside the jail. (That gives you an idea of how out-of-control it was.) I don’t recall how, but I found a Filipina nun who went in every week to minister to inmates.  She said she would take me in, but I would have to adopt the cover that I was a nun. Fortunately, she did not wear a habit, just jeans and T-shirt. I signed on. 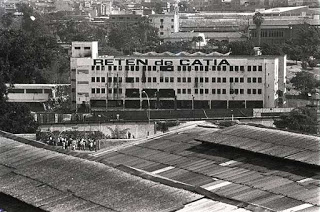 You could smell the jail from a block away. The air stunk of raw sewage. We queued up with several hundred other women, including a fair number of prostitutes, to go through a security check, which involved lying on a table and unzipping your pants so female guard could pat down your pelvic area. I was extremely lucky. Just the past week, they had stopped doing vaginal searches!
Once we were inside the jail, we were in territory ruled by inmates. No guards were in sight.  The place was horrific. The cafeteria/dining area was coated in a thick layer of black grease. There was no running water in cellblocks. Inmates had to fill buckets from communal faucets to take them to their cells, which were jampacked. Inmates slept in hallways on mattresses on the floor. They were also heavily armed with shanks (homemade weapons). One showed me a sharpened bed leg that he kept in the back of his pants. Since metal bed frames were the source of many weapons, the beds were supported on upturned buckets or on the floor. There was no visiting area. Visitors roamed free in the cellblocks.
Many inmates were desperate to talk to the “hermanas” (sisters) to have some outside contact. Some were not so friendly. I asked a lot of questions, storing answers in my head since I couldn’t take notes. One prisoner got nasty and asked if I was a journalist. “We don’t like journalists,” he said. (I’m not sure why, maybe he didn’t want his drug trade exposed or something.) I had to rapidly head off his suspicions and say I was simply interested in prison conditions. We visited the so-called infirmary, a cement courtyard with sick inmates lying on the ground, and asked a prisoner with HIV what kind of care he was getting—a glass of milk every day, that was his medical care.

I was certainly glad to get out of the place. It was truly a hellhole that degraded human beings. But I got my story.

Fortunately, a few years later, the jail got demolished as a symbol that the government was going to improve conditions throughout the prison system.  They may have improved somewhat, but I doubt they’re adequate.

In addition to being a journalist, you’ve written a non-fiction book, Peace in the Hood: Working with Gang Members to End the Violence. How did that come about?
As a reporter! I wrote a feature for the AP about a former Black Panther in South Los Angeles, Aquil Basheer, who ran a program to train former gang members as community peacekeepers, gang interventionists is the formal term. He has become a sought after expert in countering community violence. (He’s spoken at the World Health Organization in Geneva, had two documentaries produced on his work, conducts trainings around the country and abroad.)  I thought it was a fascinating concept, as well as a story of redemption of people who had wrought great harm in their communities and wanted to make amends.
Shortly thereafter, we started collaborating on a book, which ultimately took four years to write and sell, about Aquil’s model for accomplishing this conversion. I made it as narrative as possible, drawing on Aquil’s wealth of anecdotes from his four decades on the streets doing this work plus many of his team members’ stories, as well as a sort of how-to manual, which can serve anyone who works in inner-cities, where communities function with dynamics very different to other settings.  The book is being used as a text in various courses at UCLA, USC and The Chicago School of Professional Psychology. It’s a project that I found super interesting and, hopefully, contributes to the world being a better place.
You have a very exciting life, what drew you to the time consuming, working all alone in a room to write a novel, and then go through the agony of finding a publisher? What made you want to be a novelist?
The short answer: a vivid imagination combined with some sort of masochistic tendency! I won a prize for “writing interesting stories” when I was six years old so I guess writing was always there. It came out as soon as I literally learned how to put pen to paper. I was a voracious reader as a kid so that also made me want to write books when I grew up. When I discovered journalism in high school, I knew that’s what I wanted to do as a career because I could write. I wanted to be a foreign correspondent.
Although I had written short fiction on and off my whole life, I never seriously pursued it as I was very involved in journalism, which I loved. Then one day, I suddenly decided I had to get serious about my childhood dream of writing a novel. I don’t really know how that came about. It was just something I had to do. That was about 2004-2005. I was a reporter at the Miami Herald at the time. I’ve been steadily working on my fiction ever since.
Writing a novel is damn hard work. I just “love” these people who read a book and say “I could write that!” Well, go ahead and try! I’ve written my whole life and novels are the hardest thing to pull off, although I probably hold myself to higher standards than some writers.  However, the greater challenge also means the greater payoff in satisfaction. Ultimately, writing fiction is the only thing that completely absorbs me. I guess that’s why I am driven to do it.
You are a member of the International Thriller Writers Debut Author Program, what other events and PR do you have planned for your first year as a novelist?
This year and next I’m planning to get to as many writers’ conferences as I can with the aim of networking with other authors, readers and publishing industry types and simply getting more name exposure. I’m going to Thrillerfest in July (very excited to be heading to New York after an absence of eight years!), Malice Domestic in April, California Crime Writers in June in Los Angeles, and probably a couple more as funds allow! I’ve actually found that fellow authors are very supportive of each other and are an incredible resource. A writer’s best friend is other writers. (Elena here – so excited to spend time with you at ThrillerFest and Malice Domestic!)
What do you like to do when you aren’t writing or researching a story?
I don’t do much straight journalism any more as I’ve moved into corporate communication writing. I write a lot of speeches for executives at household-name companies, press releases, blog posts etc. I also edit dissertations and do big research reports for Congressional Quarterly Researcher.  It’s a schedule that allows me the time for my passion writing —my novels. I make an effort to get off my rump and exercise every day. I read a lot, of course, love theatre and movies, going to art galleries. Second to writing, however, my other passion is travel so I’m usually planning a trip somewhere.  I find travel super stimulating and nourishing  to the brain and the soul.
What are you working on now?
I’ve actually been in a bit of a creative funk of late, waffling about which of various unfinished manuscripts to pursue. However, with the climate of growing political awareness in this country, my gut is telling me that it’s the right time to resurrect an old manuscript tentatively called “The Revolutionary.” It’s sort of a political thriller set in Caracas, Venezuela, in 2002 around the coup attempt of then-President Hugo Chavez, which I covered as a reporter. The protagonist is an expat who gets involved in the political scene with disastrous consequences.
Final Words of Wisdom: 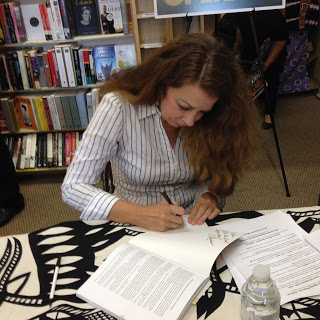 Believe. Believe you can do it, that you have something to say. Believe in yourself, not in agents, editors, your next door neighbor. Yourself. Believe in your gut instinct, your intuition, and run with it.
Dare. Dare to be different, to stand out, to be unique, to be yourself, to write whatever the hell you want to.
(Elena here again. Thank you, Christina, for spending time with me on my blog – I’m so excited to introduce you to readers!)