Writing in the Snow … Ain’t it a cold, cold world. 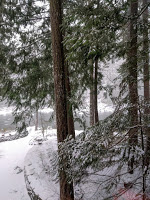 Beautiful day here in North Bend, Washington. The promised snow has arrived, along with a few downed trees and a short-lived power outage. Here’s the current view outside my writing room window.

I’m waiting for the snow to melt before I drive out of my ‘hood, so I didn’t go to the gym. A free morning. I should be writing, right?

No, not so much. I’ve walked around outside in the snow. I’ve taken a lot of pictures, some of which have gone up on Facebook, so everyone else can see how cool our snow is. Which it is.

I took some video for my moment of Zen, snow falling on the middle fork of the Snoqualmie River. 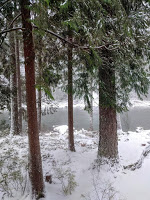 Here’s a picture of that, I can’t post video here.

I’ve also looked at other people’s pictures of snow, done a Facebook quiz on “recognizing animals,” and watched my “2016 year in review.”

Talked to my hubby on the phone while he drove in to Seattle, asking about the snow on the road. Texted the barn manager to check on the horses … in the snow. They are doing fine. They have little heaters in their water bowls and get fed extra when it’s cold.

Basically, I’m a kid on a snow day. I might as well admit I’m not really getting anything productive done. I did check on my Goodreads giveaway, which has been approved and will post up tomorrow, so I can give myself kudos for that.

But mostly, I’m sitting around finding all kinds of time-sucking things to do that have nothing to do with finishing Three Strikes, You’re Dead.

I’m also eating sweets and drinking a lot of coffee, so there’s that. 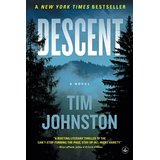 It’s interesting to me how guilty not working can make me feel. Or maybe it’s not guilt so much as a sense of total failure at being a grownup. I keep saying to myself, “Come on, Elena. You had a goal about reaching a specific word count today, but here you are contemplating going back to bed and reading Descent by Tim Johnston.”

It’s a good read so far. I’d justify it by saying I need to stay relevant in my field, but I know it’s just because it’s snowing outside and that fits the general state of anxiety I’ve been living in for weeks.

It looks beautiful, but long enough outside without the right clothes and the beauty will kill you. Bury you in a virginal whiteness and you don’t get found until spring. Or, well, later this afternoon when the rain returns and the snow melts. This is, after all, Western Washington, not Billings, Montana, or Nome, Alaska.

The weather does, however, represent how I feel right now. What I want to do is hibernate. Stay in my warm bed, curled up with my animals, until the world feels safer, less full of misogyny, xenophobia, and hate. Until my Facebook feed isn’t full of angry posts and doomsday predictions about just how bad it’s going to get. I don’t need Facebook for that, I can go there in my own mind without any help from my friends.

But this is Western Washington, and the snow is going to melt, and I do have to finish book three, and promote book one, and prepare for the launch of book two. These are the things I can control. Not the weather. Not the political disasters and impending years of dismantling human decency, such as it was. Not the hate. Not the anger. Not even my own.

So I’m going to enjoy my snow day, or snow morning as this is likely to be. And remind myself that spring does come. Eventually.