Getting back into the swing of things, I’m going to report on my summer and fall activities in reverse. Stay tuned for updates on Bouchercon, Killer Nashville, and the Decatur Book Festival.

Both authors were inspirational. I wasn’t familiar with Natasha Cooper – though I certainly know the woman who introduced her, Sara Paretsky. You know you are about to hear an amazing author, when that person is introduced by the creator of the V.I. Warshawski novels.

Natasha spoke passionately about how she found her voice as a writer. She began her career writing fairly light and fun novels, but she realized she wanted to tap into something deeper.

She was brought up to be “a good girl” and good girls don’t feel anger. “We can feel ill and we can feel sad, but we cannot feel rage,” she said, in her beautiful London accent.

Then she found her rage and her writing career took off. 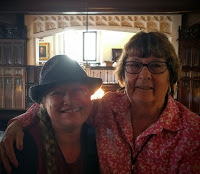 Maureen Jennings was also a marvelous speaker. She told of her experiences moving from England to Toronto at the age of seventeen. Born in 1939, she says she always felt vaguely responsible for the outbreak of World War II. I was already a fan of Maureen Jennings the author, both for her novels and the television show currently entering its 10th Season on CBC. Now I am also a fan of Maureen Jennings the person. I had the great good luck of sitting next to Maureen during the last signing time of the conference. A quieter period, as most people had already gotten autographs (and I think Maureen’s books had basically sold out), so I had the opportunity to talk to her for about thirty minutes. She was funny and gracious and very generous with her time. I’m looking forward to seeing her again at other conferences in the future. 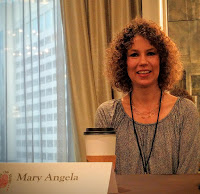 The biggest highlight of the conference for me was hanging out with fellow Camel Press author, Mary Angela. Mary’s first novel, An Act of Murder launched this month, so she has just started her journey as a debut author. She’s off to a great start, she was terrific on two panels and her books sold out at the bookstore. I had the pleasure of reading Mary’s book and writing a blurb before it came out. It’s a wonderful cozy that will have you waiting impatiently for book two. 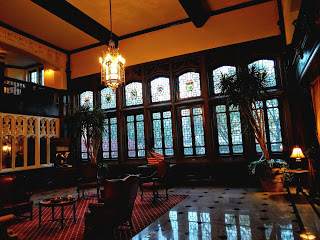 It was a whirlwind weekend in lovely downtown Indy. The Columbia Club is a great old hotel, dedicated  in 1925 and added to the historical register in 1983. 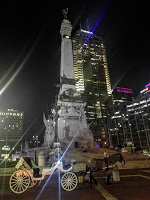 Full of marble floors, carved wainscoting, leaded and stained glass, and lovely chandeliers, it was a delight to spend three days there. Especially with two Starbucks, one candy shop, a towering monument,
and several horse and carriages right outside the front door.

It has been an incredible couple of months since my first novel, One Dead, Two to Go launched in April. I have been all around the country, met readers and other authors, signed books, been on panels, taught workshops, finished Two Heads Are Deader Than One, and am hard at work on Three Strikes, You’re Dead.

But it’s very nice to be home.

As many of you know, I lost my beautiful Arab gelding Chance a few months ago.

So Jasper has had to do double duty, as my husband’s and my horse. He’s a character and a delight. And I love spending time with him.

I’m looking forward to spending quality time with our new kid, Radar. He’s very different from Chance. Will he ever come running when I whistle? I can’t answer that right now, but I can tell you it does my heart good to see Chancey’s once empty paddock filled with this sweet boy. 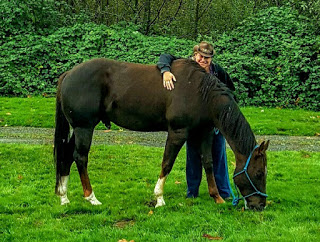