The rest of day three at ThrillerFest 2016 was a blur. After hearing Karin Slaughter’s great interview with Gillian Flynn, I went off to listen to Lawrence Block, Lee Child, Tess Gerritsen, Peter James, Arvam Ludwig, and John Sandford. Even if you don’t recognize the author names, you probably recognize some of their titles, including: A Walk Among The Tombstones, The Jack Reacher Series, the Rizzoli & Isles Series, the Superintendent Roy Grace Series, and the Prey Series. 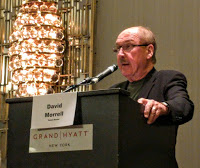 If that wasn’t enough, the panel moderator was David Morrell, author of numerous best-selling novels including a book called First Blood, with a little-known protagonist named Rambo.

The panel was about books and movies. Everyone on the dais had written several novels, (with the exception of Arvam Ludwig, who I’m proud to say is a fellow ITW Debut Author) which have been  translated into TV and film. Arvam came to the table with several years’ experience making movies prior to writing his first novel, Shooting the Sphinx. 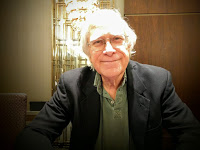 As interesting as it was to hear what everyone had to say about their work and careers, the highlight of the panel for me was when John Sandford complimented my friend Peter Clines’ writing. Sandford starting talking about “this guy in Los Angeles” writing superhero/cross genre… and I thought, he’s talking about Peter! That is so cool! When he said the name Peter Clines I almost applauded. When I went up to say hello to Mr. Sandford I think I may have come across as a slightly crazy name-dropper, but it was still a lot of fun. Thank you Mr. Sandford, for being so gracious.

The interview was a hoot – these two authors are very funny people. I was especially interested to learn Heather Graham started her career as an actor, earning her degree in theater from the University of South Florida and working in dinner theater and as a backup singer. 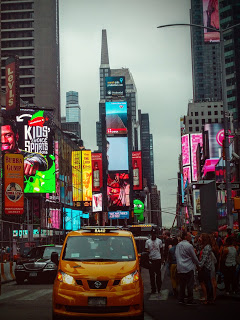 Once the interview ended I decided I couldn’t top the experiences I’d had throughout the day. It felt like the perfect note to end on for a fantastic conference. I headed back out onto 42nd Street and made my way home to The Jane Hotel.

New York is always exciting – and this trip was no exception. I loved every moment of ThrillerFest and I’m already looking forward to next year.