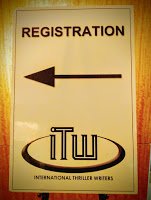 Day two at Thrillerfest 2016 starts off on a high note. I’d volunteered to work the registration desk for a few hours in the morning. My fellow volunteers are friendly and welcoming. It’s fun to meet the other writers, including some of my fellow Debut Authors and bloggers I’ve been communicating with via emails and social media. 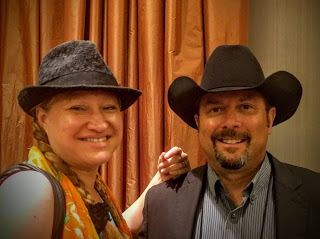 Next thing I know, I’m talking to CJ Box, winner of – among others – an Edgar, an Anthony, a Macavity, and a Barry award.

CJ Box is the author of the Joe Pickett series – starting with Open Season – along with several stand alone novels. He has written twenty-one books, has been translated into almost thirty languages, and has sold more than ten million copies worldwide.

And I’m standing there wishing him a good time at the conference! Kind of a great way to start the day.

I attended CJ’s Spotlight Guest interview after I finish up my volunteer time. He’s a fabulous speaker. A native of Wyoming, he still lives in the sparsely populated state and sets many of his books there. Joe Pickett is a game warden in Twelve Sleep, WY, and CJ brings that vast, open, western state to life with his brisk dialogue and descriptive prose.

When three o’clock rolls around, I get to hang out with Steve Berry. Steve’s books have been translated and sold in over fifty countries. He has sold so many copies of his books, I had to count the zeros twice... 20,000,000. Steve is also one of the founders for The International Thriller Writers, and he’s giving back to his community by spending two hours with the 2016 Debut class to talk to us about the craft, the business, and the life of being a writer.

Then, because you just never know who might be wandering the halls, I run into Walter Mosley. Walter is the author of more than fifty novels, including the Easy Rawlins series, which burst on the literary scene in 1990 with Devil in a Blue Dress.

But the thrills don’t stop there. Waiting in the lobby before the Friday night cocktail party, hosted by Random house, I run into Reavis Wortham. I had the pleasure of being on a panel at Bouchercon last year with Reavis, and have been quietly cyberstalking him ever since. Okay, so not stalking exactly, but I do enjoy following him on social media. He’s a terrific role model for a new author. He writes the Red River Mystery series, the first of which, Rock Hole, came out in 2011. He has since written five other novels and just moved over to Kensington Books. I look at him as a writer far enough ahead of me to be inspiring, but not so far ahead I can’t follow his tracks on that red dirt road of this writing journey.

As we’re chatting – me and Reavis and his lovely bride – another writer walks up to say hello. And I’m standing with Reavis and Lee Child. 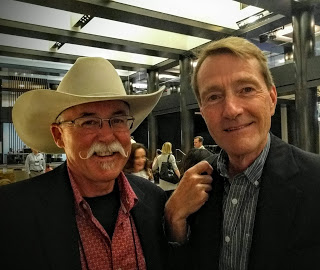 Yes, that Lee Child. Author of the Jack Reacher Series. Author of fifteen novels, which have sold more than 40 million copies in 75 countries around the world.

After I get my hands to stop shaking and my voice to drop back down an octave, I get up the nerve to ask a question.

Check back for my next post to get Lee Child’s words of wisdom.

Thrillerfest… TO BE CONTINUED…..