a writers life, authors, ITW debut author program, mystery, publishing, Thriller writer 06 Jun 16
You have a longtime interest in history and archeology, did you do specific research for The Vilcabamba Prophecy? Have you visited the region you set the book in?

I conducted a great deal of research into the ruins of Peru and their background stories. One of the reasons I chose this country was due to the vast number of ancient civilizations that once called the region home. The Sacred Valley, an area in Peru, is dotted with many ruins and archeological wonders. As the home to the former Incan empire, the country is rich with lore about lost treasures and civilizations. Sadly, I haven’t had a chance to visit the region yet, but it’s high on my “Must See” list.
Aside from research about Peru, I also had to research various other subjects including background on the British Special Air Service(SAS), as the mercenaries who work for the antagonist, Frances Dumond, are former members of this branch of the military. My research included the history of the SAS, along with training methods and weapons favored by its members. I also conducted research into large corporations to see what sorts of industries would form the secret cabal working behind the scenes. This helped me to flesh out some of the minor characters in the story.
Next, I had to research volcanoes as El Misti, a volcano in Peru, played a major role in the story. 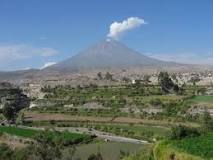 I searched for past eruptions of similar volcanos to get an idea of how the process plays out. In fact, I consider El Misti to be a character in some ways, as its behavior influences the cadence of the story. I conducted much more research, but this gives you an idea of the type of subjects I had to learn about to write my story.

Check back for the next installment.