Deborah Schneider writes Western and Americana romance novels. Her publishing career began when she won the Molly Award for the most unsinkable heroine from the Denver Chapter of Romance Writers of America. She was a finalist in the New Historical Voice contest sponsored by Romantic Times Booklovers Magazine. Although she didn’t win the contest, her consolation prize was a publishing contract for Beneath A Silver Moon. Her next book, Promise Me, won the EPIC award for Best Western Romance. 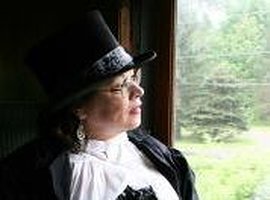 As Sibelle Stone she writes historical romance with paranormal elements, (things like magic, witches and evil Druids) and steampunk with incredible machines. It’s the same person, but with two different sides. Sibelle’s newest release is a steampunk Western romance, Prudence and the Professor.
Both Sibelle and Deborah reside in a small town near the Cascade Mountains in the Pacific Northwest. Deborah is employed by one of the busiest libraries in the country in a job that involves arranging programs with authors, storytellers, musicians, dancers and jugglers. Deborah received the Romance Writers of America Librarian of the Year Award in 2009.